My new local team. The Ukrainian season resumes on February 28th with Chornomorets (currently third bottom with ten defeats out of sixteen) at home to sixth-placed Tavriya Simferopol.

The Ukrainian League is ranked seventh in Europe, ahead of Portugal and Holland, but that's mainly because of Donetsk and Kiev and "Odessa is non-league crap at its very worst," emailed a friend who's actually seen them play this season. He didn't go back. First rule of Eastern European football: lower your expectations - and spend as long as you can in the pub before kick-off.
Posted by Michael at 14:54 No comments: 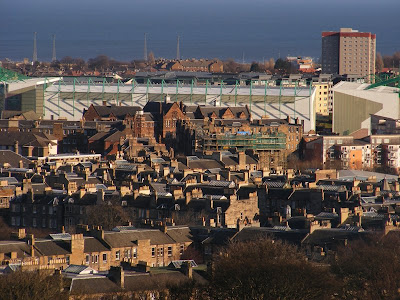 Home of Hibernian Football Club, from the top of Calton Hill. Unless you're a Jambo, this is surely one of Edinburgh's greatest sights. Even the sea looks strangely enticing - doubly so if you're a Celtic fan this morning.
Posted by Michael at 15:59 No comments:

Grounds Without Games: All Around Lisbon 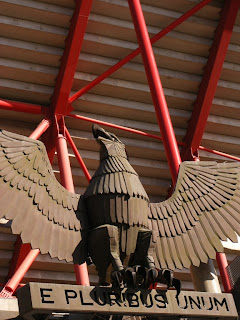 Using map one of the Lonely Planet's 1998 guide to Lisbon, a plastic compass and the kind of urban navigation skills that da Gama himself would've been proud of (well, as long as we agree to overlook that muddy, motorway deadend right at the start), I found my way from the Estádio da Luz - the original and still very much the best Stadium of Light in the world - across the northern suburbs to the Estadio Jose Alvalade XXI, home of Sporting Clube de Portugal (or Sporting Lisbon, as we English like to call them for short). 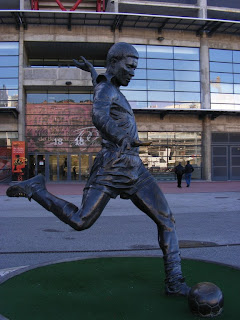 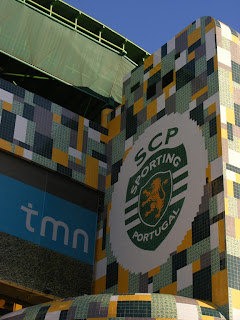 The two teams' rivalry extends to areas off the pitch too: Benfica (Metro stop: Colegio Militar) having an imperial-style eagle tacked above the main entrance, a statue of Eusebio where the stadium tours start, stands sponsored by Sagres beer and a discount electronics supermarket shielding it from the road. Sporting, on the other hand, had their ground tiled in the club colours of green and white (making it look a little like a public urinal), with their own multi-screen cinema, food court, health centre, Lidl supermarket and a clubshop in which everything cost precisely double what I was prepared to pay. Each of the stands were sponsored by a different company - Super Bock, not Sagres here. Let's hope the classless clowns currently running Newcastle United don't get wind of this branding opportunity, eh? 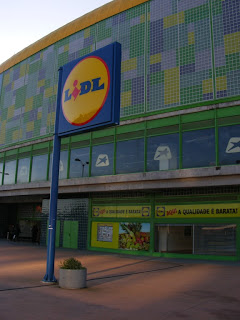 Whaddya mean it doesn't look like a football stadium?
Posted by Michael at 14:34 No comments: 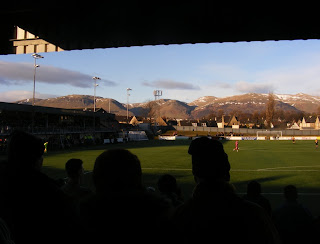 A proper matchday experience: a pre-match pint watching the early game, a tenner in and a quid apiece for stovies and a Bovril, snow-streaked hills, swapping ends at half time so you can stand behind the goal your team's attacking - and exchanging concrete steps and a metal roof for grass and wooden risers, stamping your feet all second half to stop them icing over, a flukey late winner through a crowd of legs, straight into the bottom corner of the net.

The game itself was much more forgettable. Arbroath had been the better team until they had a man sent off, their passing neat and tidy but with no real threat. The home side huffed and puffed, their number nine running the channels willingly, but lacked the guile to break down a defence, the persistence to force an error. "That was not good," the bloke next to me put it at half time. I wasn't about to disagree. 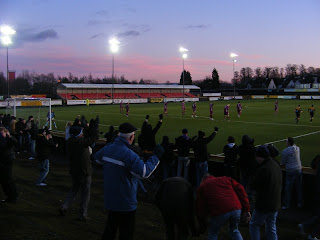 Ground 113, by the way, was a pre-season friendly at Stainton Park, home of Radcliffe Borough, where the hosts lost three-two to FC United of Manchester (July 27th, 2009). Two scuffs and a long-range shot, if memory serves me right. 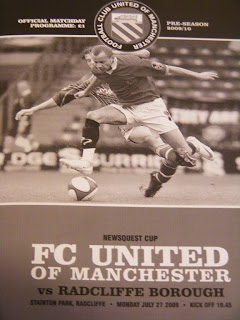