He was Northumbrian, he'd never known
horizons shimmering in the sun

Michael Roberts, 'Hymn to the Sun'.

August 11th, the closing afternoon of the men's Olympic football programme and the opening one of the 2012-13 Northern Football Alliance.  Amid the red-brick municipal estates of Longbenton, better known as the home of Findus Crispy Pancakes and Her Majesty's Revenue and Customs, the footballing temperatures have rarely been as high since a teenage Peter Beardsley went from sweeping factory floors to captaining Newcastle United, winning two league titles with Liverpool and turning out for England in 59 internationals and two World Cups. 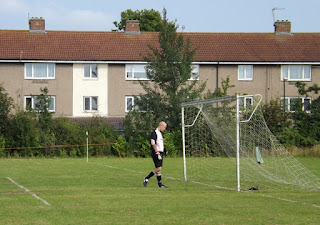 Formed as recently as 2008 - among the most traumatic years for those who followed Beardsley into the Three Lions shirt -  Longbenton Football Club have since gone through three different sponsors, one enforced name change and three sets of home colours, last season's pink shirts now ditched in favour of Dundee United orange with black shorts and arms. Third place in last season's Tyneside Amateur League Division Two - 11 wins from 18 games holding off the challenge of Heaton Rifles and Lindisfarne Athletic - was enough to see the Bulls promoted behind champions Winlaton Queens Head, David Short scoring 17 times in the league and netting 33 in just 35 games overall. Keith Thompson's side made the final of the Selcray Bowl too, beating first division Blyth Isabella in the semi before losing 3-1 to West Jesmond after a man-of-the-match performance from ex-Longbenton goalkeeper Chris Saunders.  Better news was to follow, the Northern Football Alliance's June AGM seeing the club join Isabella and High Howdon Social Club in stepping up to Level 13 of the national football pyramid. "A massive success both on and off the pitch," Thompson says.

At £1,200 a year, chairman and former coach Tony Short is currently the club's only sponsor, with Wednesday night training sessions taking place on the municipal pitches at Paddy Freeman's Park. But both 31-year-old Short and last season's player of the year, midfielder Anthony Peel, are back for the new season while David McDonald and young keeper Tom Kindley - a substitute in the 2010 FA Vase Final, when he was briefly on Sunderland's radar - have been snapped up over the summer from Northern League Whitley Bay. 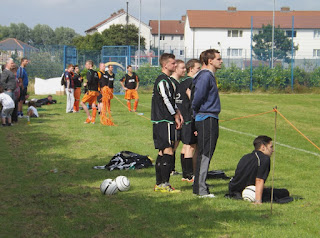 The Bulls kick off the new season at home, Alnwick Town Reserves the first Step 9 visitors to the Oxford Centre Stadium. North Northumberland League title winners in 2010-11, the black and whites could do no better than twelfth in the first attempt to get out of the Northern Alliance's basement division. "The game's here to be won," Thompson tells his starting eleven as Alnwick tap the ball around their half of the pitch and substitutes laze face down on a touchline sealed off with orange rope.  There are eight other spectators as the game begins with competing shouts of "Howay, get stuck straight in."

It's an orange shirt that almost gets in first, a quick counter upfield ends with Anth Brown, a teenage striker signed from Tynemouth Under-18s, playing in Short, who sidefoots straight at the oncoming goalkeeper. "Should have scored there, son," a home fan mutters under his breath. With Ben Keenan guiding and cajoling up front, Alnwick put the home defence under pressure before another breakaway sees Longbenton's Robbie Woods slide the ball inches past the post. "Keep yer shape! Two banks of four!" barks the visiting coach. Keenan almost stabs in past goalkeeper Martin Dixon and sends a left-footed volley a couple of metres wide. "Rules of attrition," he says as a forward ball is just cut out. "Nine times out of ten for that one time." 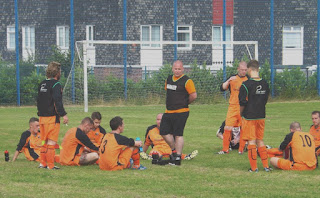 "Plenty of positives from that half," begins the away team talk as Thompson rouses his team and assistant manager Paul Charlton, once on the books of Crystal Palace and Gateshead, takes a break from running the line to have a cigarette. Minutes after the restart, Alnwick's left winger miskicks when through on goal and Hutchins spanks the follow up into a garden. Longbenton are more clinical: man-of-the-match Brown running clear of his marker and redirecting a through ball into the corner of the net with an hour played. Alnwick respond through the wily Keenan, his first shot turned away by Dixon and a second rebounding off the post, but with Peel, easily the most skilful player on either side, controlling the pace in midfield it takes four good saves from the visiting keeper to stop Longbenton running away with the game.  Charlton passes on the flag with ten minutes remaining but hardly breaks sweat in the centre of defence as the home side play out their first ever victory in the Northern Football Alliance. With Peel and Brown in the side, it won't be their last. 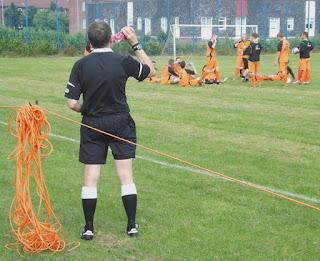