"Incredible when you think about it," a North Ferriby United fan ponders. "There aren't even 4,000 people in this place, other clubs reckon we're just a glorified pub team and yet we've won a cup at Wembley and are ninety minutes away from a place in the fifth division of English football."  It's been a remarkable journey: from humble beginnings in the East Riding Church League, the village team had already been to Wembley once - losing 3-0 to Whitby Town in the 1997 FA Vase - when they ended an 18-year stay in the Northern Counties East by lifting the championship in 2000.  It took five years to add another title, eight more to make it out of the seventh-tier Northern Premier League.  Just one season later they lost top spot in the Conference North on the final afternoon of the 42-game season and were beaten in the play-offs by Guiseley without scoring a goal.  Wembley was the unlikeliest of fillips, the fairtyale story that made North Ferriby headline news: two-nil down to the relative giants of Wrexham with just 14 minutes to play, the Villagers roared back to take the FA Trophy on penalties in front of a 15,000 crowd.  "It’s all a bit of a blur," said boss Billy Heath, whose previous visit to the national stadium had been as a ball boy when England played Yugoslavia in 1986.  "I never dreamt I'd have a chance to manage team here." 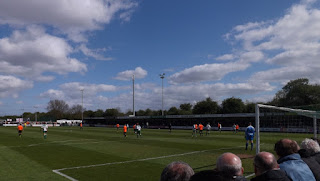 The victory came at a cost, fixture congestion leaving the team in midtable and Steve and Eman Forster, son-in-law and daughter of Hull City owner Assem Allam, deciding to sell up after two years in charge.  "Early talk was of reduced budgets and voluntary relegation to a more sustainable level," wrote Darren Norton, editor of the  View from the Allotment End fanzine. "With crowds around the 300 mark on a good day, that level would probably have been back in the Northern Premier League or below."  Finances were tightened but the the owners stayed on,  United winning one and drawing five of their first seven league games. "We expected just to make up the numbers," Darren Norton recalled. Instead, the Villagers pipped Fylde to second place and then overturned a 2-0 first-leg deficit against Boston United in the play off semi-final.  "Another Sunday afternoon comeback," the Hull Daily Mail reported. "They had two thirds of the crowd," a North Ferriby fan says, "but they turned up thinking they'd already won." 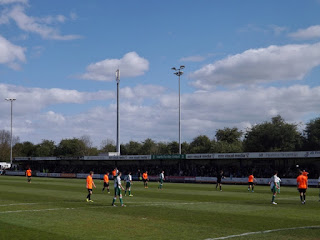 Much like the home team's season, my morning gets off to a bumpy start.  Still recovering from a week in Montenegro and a Friday night house party,  I'm unexpectedly forced to navigate two barriers to collect a ticket from York Station and a third to reach the platform my train's just pulling away from. I consider going home, head out of the station in search of another route and the very first bus I see has North Ferriby written along the side.  "There's one every two hours," the driver says.  "Must be your lucky day." An hour and a half later I belatedly reach the north bank of the Humber just as two coaches from Preston are disgorging orange-shirted Fylde fans into the village pub.  "The play off should be on a neutral ground," complains a bloke hauling a drum and five balloons.  "Their pitch is awful for a final." His mate nods sagely.  "The next one up's at Wembley, isn't it?"  "Duh, duh, duh, duh," chant a moody gang of teenagers dressed in Stone Island leisurewear.  "Just look for the floodlights," a pair of stragglers tell each other as they walk the wrong way past a church.  'Horses, dogs and golf prohibited on the grass' says the sign at the turn off for the ground. "This is it," says an elderly woman with a white Fylde scarf and two orange balloons. "Next stop the National League." 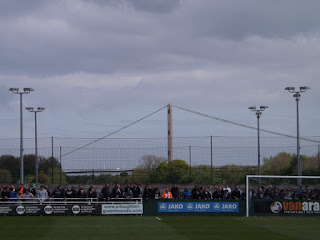 The ground is hemmed in on three sides, allotments restricting further development at one end and a children's playground and railway line marking the boundary of two others.  The carpark is cramped,  the club shop's in a portakabin and there's a train trundling past the top of the main stand.  The clubhouse isn't selling alcohol after a pitch invasion by Boston fans but is still packed with a couple of hundred people celebrating Hull's second goal at Derby.  "It's really mainly people from Hull who come to watch Ferriby," one confides.  "The villagers are a bit sniffy about what's  going on here. It's not really a football kind of place."   The talk outside is of prospective new owners  and Hull City scrapping concessionary pricing.  "It's like Allam just wants to piss people off," a bloke in a City baseball cap says.  "People my age will save a bit of money but he's asking kids and pensioners to pay more. There'll be loads of bad publicity if Premier League teams are visiting next year." 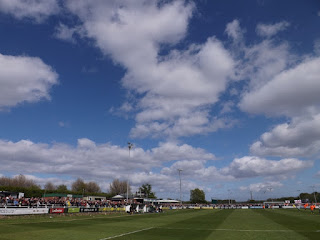 Unlike disillusionment, money's an issue wherever you go.  "We've cut the budget by half this season," a home supporter tells me.  "A couple of high earners went and we've only used 18 or 19 players all year.  We've been really lucky with injuries because three of those have only come on as subs." The Fylde support begin to fill the space behind the Humber Bridge end of the ground.  "Lancashire, Lancashire," they chant, territorially marking out their space with flags and a banner that reads 'In Chally We Trust'.  As kick off approaches, nerves set in and the atmosphere's more reflective.  "I think Challinor might get the sack at Fylde if they don't win today," someone reckons. "Some of these players will be going up even if the club doesn't." says Darren Norton as his team begin their warm up for the game.  "Anyone for a golden goal?" a raffle seller asks. 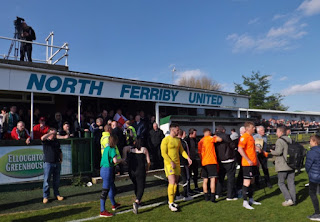 Not much happens to get the 1,800 crowd going again until midway through the half, Adam Nicklin opting to come for a cross his defence has covered and  Sam Finley squeezing the opening goal in off a post.  "Shite defending," rues one supporter.  "Haven't got going yet, have we?" says another.  All the noise is from the other end of the ground. "When we get promotion, this is what we'll sing," the Fylde fans chant.  "Plenty of time yet," a single voice responds. It takes a while for the home side to recover, a shot tipped over and another scrambled away from the line.  "Not our day," a fan says despondently.  We're three minutes into time added on when Liam King squares the ball across the Fylde penalty box and Wayne Brooksby gleefully hits the equaliser. "His first touch of the game just about," laughs a celebrating fan.  "They didn't want to go in and face Billy (Heath) losing.  Even the linesman runs away from him." 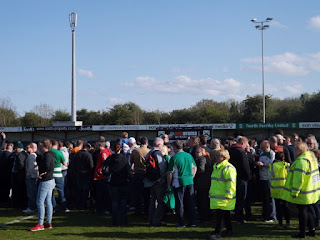 The home team look the likelier to score in the early stages of the second half. "They're flagging, Ferriby!" encourages a supporter after a goal's disallowed for a push in the back.   He's less confident in the final minutes, Fylde's Dion Charles blasting over with Nicklin exposed once again. "It's not like him," Darren Norton reckons. "He's been brilliant for us in goal.  It's been a long season, though."  Even longer as the game heads into an extra 30 minutes, Ferriby finally edging ahead for the first time when Danny Hone nods in at the other end of the pitch.  "We're the green and white army," a corner of the main stand begins to sing.   "Keep talking, keep talking," Billy Heath urges.  The fourth official raises his board. "Last minute of Conference North football," someone says nervously.  When the whistle blows fans trickle on to the pitch. "Unbelievable," Heath says into an iPhone.  "We have an unbelievable team spirit and an unbelievable desire to win."  "I grew up with Hull City and I'll always say I'm a fan, but I'd feel a bit of a fraud going to Wembley to see them now," a supporter admits as the play-off trophy is hoisted overhead.  "This is my team.  North Ferriby United in the National League! It's close on a miracle what's happened here."

Many thanks to Andrew Wilson for the lifts around the Ridings and the lads behind the Allotment end goal for the wit, hospitality and background on the club. The first issue of North Ferriby's fanzine is due out at the start of next season, when the Villagers step out in the English fifth tier...
Posted by Michael at 10:18