"English games are played, as out on the vast exercising ground we saw football in full swing, several games going on".

"I also played a bit of football, near our house there was a football field; it was the town's football field, called Maccabi. We had a really good football team. Sports...were very popular among the Jewish organizations".

For almost two centuries the eastern gateway to the Habsburg Empire, Bukovina was ceded to Romania between the two world wars and is now one of the sleepiest parts of south-western Ukraine.  Two hundred kilometres south of Lviv, and a four-hour bus ride from Suceava across the EU border, Chernivtsi, the quirky, down-at-heel provincial capital,  was formerly known  as Little Vienna and Jerusalem on the Prut; the second city of Austrian Galicia, Czernowitz / Cernăuți was a cosmopolitan mélange of ethnicities, home to Romanian, German, Ukrainian, Yiddish and Polish speakers,  the birthplace of the poet Paul Celan, and one of the first places in modern day Ukraine to embrace the sport of football. 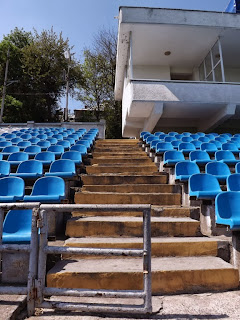 The first organised team,  Turn-und Sportverein Czernowitz, was founded by German students in the autumn of 1903,  the black and whites outlasting several name changes and two  losing appearances in the semi-final of the Romanian Cup until they were finally broken up in 1940, when the entire German-speaking population, including the playing staff and officials of  Fußballsektion Jahn Czernowitz, was forcibly transported out of Bukovina in the wake of the Nazi-Soviet pact.  Many Bukovinan Germans settled in or around Stuttgart, their sporting legacy surviving with TSV Jahn Büsnau, who currently play in a district league at the twelth level of the German football league. 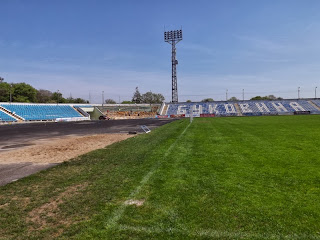 A Polish team, Polonia Cernăuţi, was established after the German club splintered in 1912, and went on to become the region's dominant force during its twenty-two years in the Kingdom of Romania.  Despite rarely owning a stadium of its own, Polonia spent three seasons in Divizia A, won the Bukovinan regional championships and held the Romanian national side to a 1-1 draw in front of 12,000 spectators in September 1922 before they too were dissolved in 1940. Fotbal Club Dragoş Vodă Cernăuţi, the favoured team of the city's Romanian speakers, won the Bukovina championship four times between 1925 and 1933 but managed only a single season in the national top-flight, during which they won four out of eighteen games.  They did, though, share briefly in the development of Cernăuţi's most famous footballing son, Alfred Eisenbeisser transferring from Jahn shortly before representing Romania at football at the 1930 World Cup .  Appearing against Peru and Uruguay,  Eisenbeisser contracted pneumonia on the return journey and was forced to stay behind when the ship docked at Genoa.  Rumours of his death spread through Bukovina; when he finally reached home, he found his mother busy preparing the funeral arrangements.  Eisenbeisser recovered sufficiently  to place thirteenth in the figure skating championships at the 1936 Winter Olympics, win another seven caps, and turn out over 140 times in the colours of Venus București.  Venus, like Dragos, were wound up in the late-1940s, having won eight national championships before Romania entered the war. 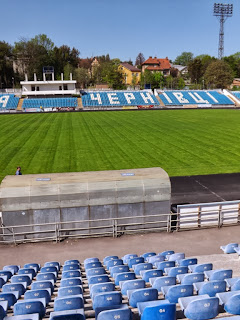 In 1919, when the region was annexed to the Kingdom of Romania,  Czernowitz's Jewish population  had reached almost 30,000 people - or a third of the entire town.  The city twice elected Jewish mayors, streets were named after Jewish authors, rabbis and prominent city councillors, the first ever Yiddish was hosted there in 1908, and the community's two club sides,  Maccabi and Hakoah Cernăuţi, enjoyed regular success in regional competitions. Maccabi, the oldest, had first taken to the field in 1909-1910, and would later supply a Romanian international of their own when Isidor Gansl, formerly of Fernencvaros and Hakoah Vienna, was capped against Turkey in 1923.  Hakoah played their first competitive game in 1920, and reached Divizia A and the Romanian Cup quarter-finals before they were subsumed by Maccabi eleven years later.  In 1932, a victory over Jahn resulted in a pitch invasion during which Maccabi players were attacked by supporters carrying revolvers shouting "Jews go to Palestine!"  By 1941, the team had been disbanded and many of its players transported to camps.  When the Soviets rolled back three years later, almost 50,000 Bukovina Jews had perished, either shot out of hand or loaded in to cattle trucks.  Jewish Czernowitz vanished in all but memory, its synagogue turned into a cinema six years after Celan published 'Todesfuge' (Death Fugue):  Death is a gang boss...his eyes are blue. He shoots you with leaded bullets, his aim is true. 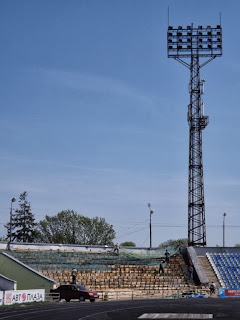 Eight years after the traumatised city was incorporated into the newly-expaned Ukrainian Soviet Socialist Republic, Bukovya Chernivtsi emerged.  In 1958, a team including veteran inside-right Evgeny Archangelskiy, scorer of four goals during Dynamo Moscow's 1945 tour of England, made its first appearances in the Soviet League.  Three decades later, with the Soviet Union on the verge of dissolution, Chernivtsi finally made their mark on the national stage, finishing in fifth place in the 1991 First League, a division which included Rotor Volgograd, Kuban Krasnodar, Zenit St Petersburg and Tavria Simferopol, the surprise first champions of independent Ukraine.  Present in the top-flight of Ukrainian football for three seasons, the yellow and blacks were relegated along with Metalist Kharkiv in 1993-94 and have since spent eleven seasons in the second tier and the same number in the third.  Narrowly surviving extinction this summer, survival is an achievement in itself in a country where four of the original twenty top-flight clubs no longer exist in any form whatsoever.

Chernivtsi has recently spruced itself up, with its red-brick university added to the UNESCO World Heritage list in 2011 and both Central Square and the nearby Olga Kobylianska Street repaved and pedestrianised. The football stadium is just off Holovna, a ten-minute walk from the centre on the other side of Shevchenko Park.  The Bukovyna, the city's fanciest hotel, is directly opposite, the bus station another ten minutes up the road.  When I went there, the stadium was empty except for a small group of workmen repairing seats and three sprinters practising their starts.  On a dirt pitch next to the ground, a shirts against skins game had just got underway.  I watched from the top of the uncovered stand, dust and sunflower shells blowing across my feet.

Read more here: http://www.miamiherald.com/2012/12/22/3147883/journey-through-time-in-ukraines.html#storylink=cp. Three unsuccessful seasons in the Ukrainian top flight  followed before the club was relegated alongside Metalist Kharkiv at the end of 1993-9
Posted by Michael at 10:46