It's not even midday but Newcastle's Central Station is already bustling with pissed off Metro passengers and fans on their way to the match with Crystal Palace.  "Every day, man," moans a bloke in a black and white retro shirt.  "Mind, I think we'll dee these," he says, brightening. "Pardew'll be buffing up his tan for Wembley and none of their lot'll want to get crocked before." "Ah divvent kna, like," his mate demurs, "but if we dee, we'll probably beat Villa an' Spurs an' all an' still gan an' get relegated.  Typical Newcastle, that." 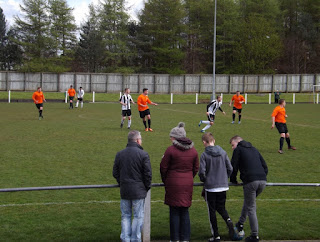 I cross to an outer platform, where an optimistic cluster of promotion-hunting Oxford supporters are waiting to board the next train to Carlisle.  The engine sparks to life like a home stand growling at a mistimed challenge, then we chunter across the Tyne, bend right at a Hilton and slowly pull through the brownfield sites of Gateshead, home of submarine telegraph cables, the incandescent lightbulb, Chris Waddle and Norman 'Bites Yer Legs' Hunter.  Industry and football intertwine all along the early part of the route; where the first blossomed the second later thrived.  Paul Gascoigne was brought up in Dunston, close by the site of the Metro Centre - where former Newcastle United owner Sir John Hall made his knighthood and a large chunk of his cash - and the world's first bit of railway track, constructed to cart coal to the river from County Durham's pits.  The next station, Wylam,  is by the childhood home of George Stephenson, whose Rocket locomotive inspired the black-and-yellow colours of Uruguay's Penarol.  Howard Kendall came from neighbouring Crawcrook, while George Jobey, scorer of Arsenal's first goal at Highbury, grew up a few miles away at Heddon-on-the-Wall.  The railway line skirts Mickley, once home to Bob Stokoe and George Brown, signed out of a colliery strike by Herbert Chapman's Huddersfield Town, where he won a hat-trick of league titles and played nine times for England, and continues to Corbridge, home to an excavated Roman fort and three Sunderland managers, and Hexham, on whose pitches Bob Batey, part of the Preston team that won the first televised FA Cup final, learnt his trade.  Back towards St James' Park, Prudhoe was the birthplace of Crystal Palace custodian Billy Callender and has more recently unearthed a pair of Premier League goalkeepers, which is probably only to be expected from a place so dependent on defence. 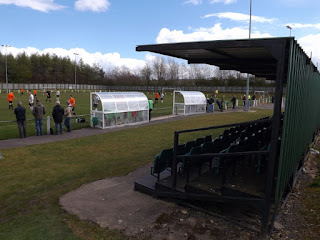 Thrown up by the Normans to cow rebellious locals, the town's castle switched to harbouring them soon after the Percies took over in 1398.  The new owners proved more adept at picking lawyers than winning causes, their properties forfeited three times before finally passing into public hands in 1966.  The town's senior football club, set up by five friends seven years earlier, has led a similarly precarious existence, as might be expected when your home ground's named after a firm that makes disposable nappies, is built on a levelled out rubbish tip and periodically suffers from problems with rising gas. After joining the Northern League in 1988-89,  Prudhoe twice battled to promotion and twice hurtled straight back down, had a benefactor whose nerves weren't up to watching the team play, and spent £30,000 a year on maintaining the place to step five standards -  "A splendid venue, neat, spick and span, superbly maintained with not a lick of paint needed or a piece of litter out of place," a visitor enthused in 2006 - before quitting after 21 years, several resignation letters and three seasons stuck to the foot of Division Two. 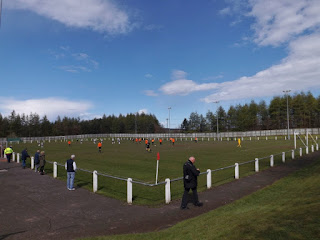 For 12 months the club disappeared altogether, local papers reporting on the "bitter acrimony" and "rancorous legal dispute" between it and the town council, who refused to sell the land the ground stood on and then served a 14-day eviction notice when discovering neighbours Stocksfield were sub-letting the pitch. "Confusion surrounds Prudhoe Town Football Club, as Tynedale folk are unclear as to whether or not it still exists," wrote the Hexham Courant in July 2009.  "We have just basically had enough," explained chairman, secretary and treasurer Chris Lowther.  He was still in situ a year later, expressing a vastly different emotion as the club gained entry to the Wearside League. "I'm over the moon to be back,"  he told the Newcastle Journal, "my wife Susan will again look after the refreshments, while my daughter Rachel will again be physio." 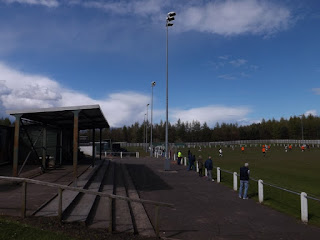 Double cup winners in 2013, Lowther's "small band of helpers" have rarely seen their team climb out of the bottom half of the league.  With three games of the season remaining, they're 14th of 20 clubs,  a whopping 49 points behind probable champions Stockton and 15 adrift of visitors Spennymoor Town Reserves,  who've played in the Wearside since pairing up with Coxhoe Athletic in the summer of 2014.  It's only five days since the two clubs drew in County Durham. "Can we keep the great run going?" Prudhoe's Twitter account asks, the team winning six and losing only one of their last ten games. 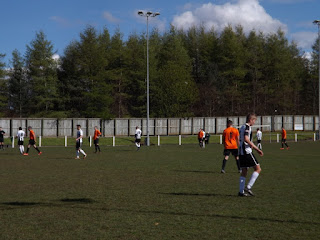 There's a dining table and portable barbecue by the turnstile booth, a portakabin clubhouse with blistered wood and a faded sign that still announces the club as members of the Arngrove Northern League. Inside the perimeter fence are floodlight poles, a flatpack all-seater stand and two terraces - the smaller now a dumping ground for advertising boards and dugouts - topped with corrugated metal, more remnants of the two-decade stay at steps five and six, though the only populated cover is a perspex bus stop that has an ashtray, a no smoking sign and three garden chairs. "Howay Pruddah," says a home player.  "Howay, get off the pitch" barks one of the 25 spectators to his dog as a home player hits the floor in the area just a couple of minutes into the game. "Liner, why would he go down there?" the manager shouts as the ref waves play on.  "Gamble," says a player.  "Big win," a spectator mutters by a spare set of posts.  "If there's no contact. why not book him?" the manager continues.  "As stonewall as you'll ever see," Spennymoor's boss agrees.  "I'd be going mad if it'd been at the other end." It's not long until Prudhoe score their first.  "Good goal, that," says one of the three fans in the bus stop.  "Just what they deserved." 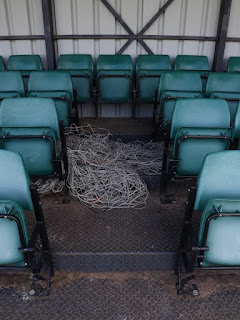 The home team knock a second through the keeper's legs.  "Referee," snaps the Spennymoor assistant while a kid whirs behind him on a battery powered motorbike and I attempt to stamp off the mud that's been caked to my shoes since an ill-advised short cut through a wood.  "You kna what it is, he's got a hold of him round the waist.  Clear foul.  Have you ever played football?" he asks the linesman, who's backing nervously along the pitch like a first night eliminee on Strictly Come Dancing.  "Ah divvent think ye have.  Join in when you want, like." The third goal's a lob.  "Can we play like this every week?" laughs a Prudhoe fan laughs.  "Get yer fingers out yer arse and start fucking playing," a Spennymoor defender rages as he blasts the ball upfield.   The visitors break; "Bring him down if you have to," a home player says.   "Help him! Help him!" yell the Spennymoor bench to no avail, the ball cleared and then rolled into the net for a fourth with just 40 minutes played.  "We've been second best to everything," a Spennymoor official laments just before a striker hits a shot into the corner to make it 4-1.  "Canny half," claps a bloke in a high vis jacket.  "Owt yet from Newcastle?" 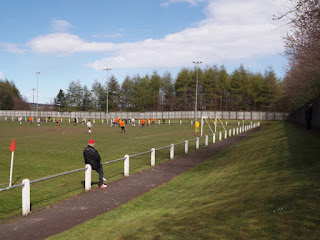 "Big 20," shouts one Prudhoe player.  "Switch on," a second implores. "0-0, we start again," goes a third.  "Overload right centre, overload right centre," says the Spenny keeper as an orange-shirted player rattles his crossbar drawing half a dozen smokers out of the clubhouse to see what's going on.  "Ten minutes' hard work," the Prudhoe boss demands of his team.  "Get a grip of yersel'," the visiting assistant groans as the referee misses a clear handball.  "Are you running this game, are you?" Prudhoe hit a fifth.  "0-0 again," says a defender. "One more big 15." "Ah kna we've been played off the pitch," the assistant says, "but the ref's a disgrace."