Founded by Miners Arms pubgoers in 1964, Yorkshire's Garforth Town was an improbable final stop for Brazil's 1982 World Cup captain.  Socrates was past his 50th birthday, pot-bellied and clad in borrowed boots,  five layers, a scarf, a hat and  a pair of gloves as he readied himself for one last appearance against Tadcaster Albion in November 2004.  "It was so cold I had this incredible headache from the moment I got out on to the pitch,"the 60 times capped midfielder recollected after a 12-minute cameo in which he had just four touches of the ball. "I decided not to play him in the next game because his warm-up had consisted of drinking two bottles of Budweiser and three cigarettes which we had in the changing rooms," owner-manager Simon Clifford explained. 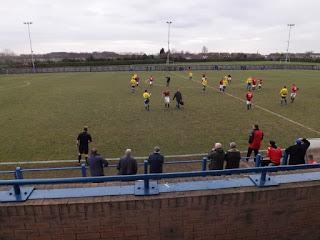 The tenth-tier side had racked up debts of £100,000 when Clifford took over in 2003 and had lost both its opening games by the time he appointed himself manager the following year.  Their first geriatric galactico was Lee Sharpe, of Leeds, Manchester United and Dancing on Ice fame.  "I was with Simon in the studio talking about a Brazil match," the ex-England winger told the Guardian, "and he said: 'Do you fancy a game?'"  Careca, aged 45 and almost a decade into retirement, briefly donned the number nine shirt at a club that had added the words  'Possum si Volo' (I can and I will) to its badge and taken to styling itself as the most famous non-league football team in the world.  Romario, Juninho and Cafu were rumoured to be coming.  "Zico's going to try his best to get here," promised Clifford, who'd previously set up the Brazilian Soccer School,  spent two months coaching Southampton and claimed he could turn Scotland into one of the three best national teams in the world. "Energetic, charasmatic and talkative," one interviewer called him.  "Forget anybody else, Simon Clifford might just be the most important person in British football," wrote The Times.  There were two promotions, record crowds,  a West Riding County Cup, an attempt to make Paul Gascoigne manager - "I will give commitment to the club," he told the News of the World a week before news leaked that he'd had a change of heart - and an unlikely reunion with Rupert Lowe, the Cellini of the Solent, who took over a majority stake with the side bottom of the Northern Premier League, banned from playing at home, and fielding what Clifford claimed was "the worst team this standard of football has ever seen".  "Confusion, mystery and lots of public relations calamities," was how one observer summarised the abject state of the club. 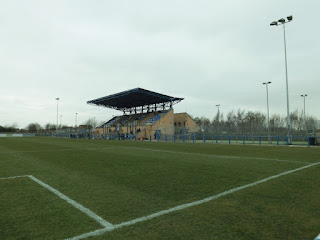 By 2014 the only thing left from Clifford's 20-year project to take Garforth to the Premier League was a battered yellow van with 'Brazilian Soccer Schools' painted on the side.  Twelve months later Lowe was gone too, selling up to a local consortium.  "It's going to be tough," the new chairman admitted. "Rupert could have shut it down in 2012. He's been the custodian of the club for the last two years".  Without their financial saviour, not even relegation back to the ninth-tier Northern Counties East League has done anything to improve the Miners' on-the-field fortunes, the team stuck in the lower-midtable of a division whose leading clubs are  reputed to be spending over £100,000 on player wages alone. 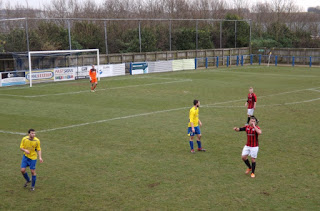 Since beating Brigg Town on December 5th, the injury-hit side have drawn twice, lost 12 times and conceded 42 goals, their only win of 2016 by a narrow margin against bottom-placed Liversedge.  “It's been incredibly frustrating recently,” manager Adrian Costello told Non-League Yorkshire.  "I'm hoping the corner will be turned soon."  Maltby Main, also from mining stock and marking their centenary year with nine league wins from ten, are six places, 17 points and 30 goals better off.  We’ve made massive progress this season,” reckons joint-manager Spencer Fearn.  “I think this is the best Maltby team there has been for a few years.” 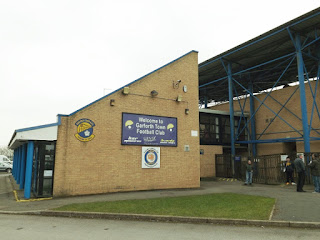 Set in a triangle between main roads, Garforth's major landmarks comprise a Tesco, a bloke dressed as Spiderman heading into Leeds, an industrial unit with Miami written - with what you suspect was a heavy dose of wishful thinking - on the side, a handful of pubs and the the football club's peculiar main stand, its roof expertly tipped upwards to let in the worst of the Yorkshire weather.  Up out of town on the crest of a hill, even on a mild spring day you begin to understand why Socrates needed all that clobber. Entering the stand, there are proper turnstile blocks, separate vans for burgers and drinks, two video cameras set up to record the game, around 100 supporters and, on the other three sides of the pitch, not much more than a garden fence and a bit of corrugated metal.  Not quite the Pacaembu. 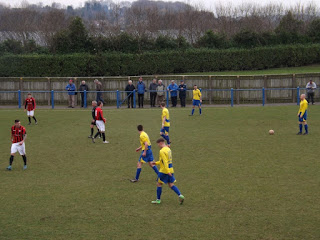 "Come on Garforth," encourages one fan. "Come on Maltby," counter four or five more.  "We're the yellow blue army," chant a handful of adolescenets I first noticed in town hurling insults at passing cars.  "We are staying up, say we are staying up."  They've no sooner finished than Sam Forster whacks an opening goal for the visiting team.  "What do you think of Maltby?" the teenagers ask, the question shedding decibels like Steve McClaren does managerial posts.  Jordan Poole stabs in a second.  "Loy-al supporters," the kids clap behind the opposite net.  "We go again," shouts co-manager Mark Askwith.  Garforth, passing smartly through the middle, manage a couple of half-chances.  "Too easy," moans a spectator.  "We've got to wake up," Askwith rages from the bench.

To his audible irritation Garforth shade the next half hour, Greg Kidd halving the deficit with a header five minutes before the break and one after the neophyte ultra group have wandered off towards the burger van.  The home side have the ball in the net with their next foray forward, the linesman's flag curtailing the celebrations.  "What's the score?" asks one of the kids, reappearing in the stand.  "Is it still 2-0?"  The ball breaks back into the Maltby box, Tim Robertson curling a left-footed shot around the keeper's dive that wouldn't look out of place in the Maracana.  "GTFC, GTFC," crow the ultras between mouthfuls of bread and boiled onion.   Askwith and Fearn mutter darkly behind their hands then storm down the tunnel as a a pensioner yells "You're a disgrace!" at the ref and the PA announces a pay-what-you-want special on charity Easter eggs. 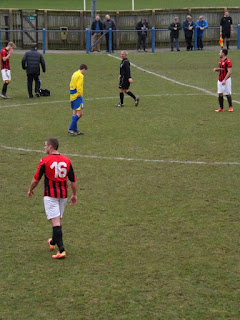 The teams re-enter the pitch to a Paul McCartney Bond theme and those shouted non-league staples "Better line", "Seconds" and "Switch on." Three children have a race around the touchline.  "Come on Maltby," cajoles a bloke in a tweed cap.  The away team shoot into legs and the goalkeeper's palms, Garforth have an effort saved low beside the post, sling lofted passes off defender's heads and, faced with a gap in the Maltby defence as wide as the one dividing Donald Trump and the truth, strike out of the ground and into some conifers.  Main try a bicycle kick.  "You've got to gamble," says a bloke down below.  Neither side's content with a point, Maltby going closest when they miss a free header.  "No more," yells the impressive Mick Jones, Garforth coach and ex-Main midfielder, "I've told you three times, just do your jobs." One last shot runs away across the face of goal, there are three peeps on the whistle and the appreciative clatter of applause.  "Cracking game," says one of the old blokes.  "Just cracking."