Seaton Delaval was never the prettiest place on earth.  "A freezing, ugly, uncomfortable Hell of a Hole," the poet Ivor Gurney, posted to a signalling course there after he was gassed in battle at Passchendaele.  Built on the coal seams of south-east Northumberland, the village boomed from a population of just 240 in 1820 to a place that employed over 3,000 miners during Gurney's dysphoric stay in the winter of 1917. 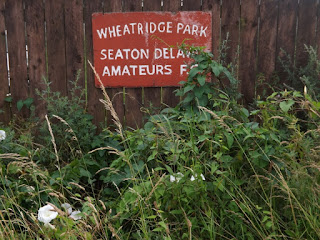 The miners of Seaton Delaval were famously militant, striking twice in the 1840s and rioting when Welsh colliers were brought in to take their place.  "At Delaval lines of cable were stretched across underground roadways and the tools of the blacklegs were hurled down the shafts," one contemporary report noted.  In 1862, 199 miners at the neighbouring New Hartley pit were buried alive when a fallen beam blocked their only route back to the surface.  After a six-day rescue attempt, it took almost 18 hours to winch their bodies up the 600-foot shaft.  Conditions improved above and below ground, the colliery owners providing better housing and land for leisure pursuits.  The first football pitch in Seaton Delaval was laid out in 1893, the Moor Edge ground described as "splendidly appointed" in a newspaper article of 1906.  Ashington's Portland Park opened in 1908, Blyth Spartans' Croft Park a year later and Wheatridge Park became the home ground of the newly formed Seaton Delaval Amateurs when they joined the Northern Alliance for a season in 1920-21.  Spectators turned out in their thousands to watch clashes against Carlisle United and the reserve sides of Newcastle, Middlesbrough and Sunderland when the Amateurs switched to the North Eastern League in their second year. "Games at Wheatridge Park relieved tedium. Those who lived in Seaton Delaval worked in it too, and football alone occasionally took them elsewhere. Those miners unable to afford the fare or the entrance admission to St James' or Roker Park went to Wheatridge Park instead," Duncan Hamilton wrote in The Footballer Who Could Fly. "Without a match, most people had nothing to do." 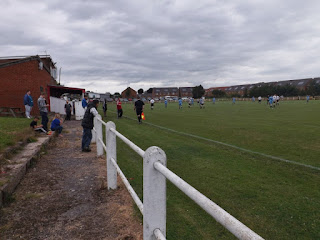 While the colliers struggled, finishing bottom of the division in 1926 and 1927, the village's footballers were prospering elsewhere.  Clem Stephenson lifted three FA Cups with Aston Villa before transferring to Huddersfield, where he won a single England cap, another FA Cup and three successive championships as Herbert Chapman's "general" on the field.  Ten years his brother's junior, George Stephenson was capped three times for his country, scoring twice on debut against France in 1928.  A third Stephenson, Jimmy, played 195 times for Watford and a spent a season apiece at Sunderland and QPR.  The siblings' hometown team joined the Northern Alliance in 1955, folded thirteen years later and were only resurrected in 1983, at the same Swansea City's Ray Kennedy began showing the first symptoms of Parkinson's disease.  Rejected by Port Vale, Kennedy had worked in a sweet factory before leaving Seaton Delaval for  Arsenal, won a double before he was 20 and then added five titles, three European Cups, a UEFA Cup and an FA Cup during eight seasons at Anfield.  "The player of the '70s," Jimmy Greaves called him.  "One of Liverpool's greatest players and probably the most under-rated," thought Bob Paisley, a man never given to exaggeration. "Things were built around him and we played according to his abilities, which were recognised throughout Europe." 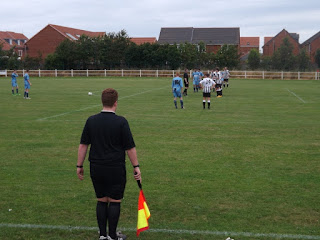 Kennedy never played for Seaton Delaval Amateurs, but the 11th-tier side got another ex-Liverpool midfielder when David Thompson, named in two England squads and once signed by Blackburn for £1.5 million joined up to play in the Northern Alliance Premier Division.  "He's doing this purely to get involved with the club and because of his friendship with our manager Graeme Redpath," said chairman Dave Holmes. "We’re looking at potentially applying for Northern League promotion for the 2017-18 season...Him being associated with us can only be good for the club and its profile". 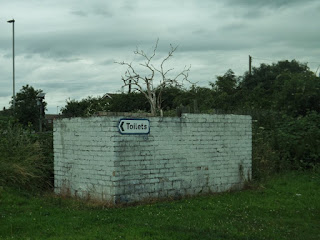 Thompson made his league bow for Liverpool in front of 38,000 fans at Anfield.  His new club finished last season in fourth place, 16 points behind Whitley Bay Reserves and 20 adrift of champions Blyth Town, and play on a pitch tucked between a garden centre, supermarket and Bellway housing estate.  The entrance sign is half hidden by weeds and a heap of grass cuttings and there's a bathtub and shed between the gate and the touchline.  A net shields parked cars from wayward shots; three steps of decayed, broken-up concrete are held in place with metal poles and roped out-of-bounds. "Nice and tight," says a player when the home team get the game underway.  "Plenty of new faces," one of the small group of onlookers reckons.  "What's that number 2's name?" Boldon CA's centre forward yells across to his bench. "This is my fifth game this week," a bloke tells me. "Mind, I used to be able to watch these from my window until the trees grew too high on the other side of the pitch." 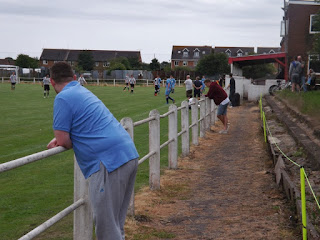 The home side get a corner. "Big on big!" Boldon's manager shouts.  "Tell you what, they're no mugs these," a spectator says admiringly as the visitors spray the ball about. His mates trade gossip about Bedlington Terriers, Blyth Town - "their pitch has come on.  It was just a field last season" - and North Shields before we're all interrupted when a Seaton Delaval player clearly punches the ball out of play.  "Liner! You not see that, like?" asks someone on the visiting bench.  "It's credibility," the official tries to explain.  "I'm too far away. I've told them up there already it's all about credibility," he repeats.  "I can only help if he asks me to." "Keep going son," a spectator says sympathetically. "It's only a pre-season friendly." 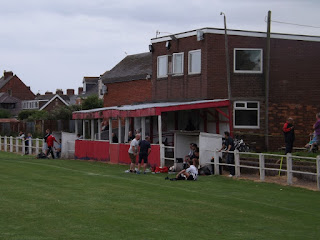 Delaval prod in the only goal shortly after the break while I'm still halfway through a bacon sandwich and china mug of tea.  "Squeeze on" and "Get your shape" the Boldon bench implore, but not even the tactical assistance of a bloke in sunglasses and a full Newcastle United tracksuit can help them find an equalising goal.  The second half stutters and a few people decide to watch through their windscreens instead, others moving under the slanted roof of the clubhouse as the sky threatens rain.  "The men hugged the touchline or stood in orderly tiers on the bank," Hamilton wrote of games played during his childhood.  Things are quieter at Wheatridge Park today but it remains a classic of its type and well worth a visit.