Most ninth-tier clubs would have reasonably expected the signing of a Champions League winner to be by far the biggest news story of their season.  But Jonathan Greening's return to Tadcaster Albion - "I contacted  the chairman and was really pleased the club wanted me," said the ex-Manchester United, Middlesbrough and West Bromwich Albion midfielder - came just days after a Christmas flood washed part of a 300-year-old bridge away, severed the town in two and left the promotion chasing side with six foot of river water and raw sewage on their pitch and a £250,000 bill for repairs. "We may need to knock everything down and start again," chairman Matt Gore told the Harrogate Advertiser. “The clubhouse needs a new bar, new walls, new everything. It's just ruined. Even the things that are still standing. It's all contaminated. Probably the only thing that will survive is the Ken Gilbertson Stand because it's made of metal.” 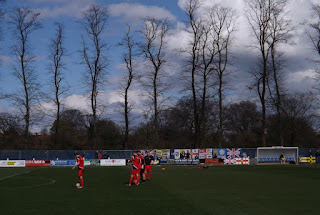 It took 73 days, a fundraising campaign that reached all the way to Australia and a clean-up effort involving hundreds of volunteers before Albion could return home.  “It’s been a very difficult few weeks for everyone in Tadcaster, but every day we are constantly amazed by the kindness and generosity shown by others to help the town back on its feet," thought Gore as the Brewers trounced bottom-of-the-table Liversedge in front of over 500 fans.  The preceding 123 years hadn't always been so eventful.  Formed as John Smith's FC in 1892,  Tadcaster won a solitary York League title in 1948 and worked their way through three divisions of the Yorkshire League before helping to found the Northern Counties East in 1982-83.  The arrival of Gore and hisYork-based i2i Sports as owners coincided with the Brewers topping the NCEL table for the first time ever in autumn 2013; third and third again, Albion went 25 games unbeaten, made two semi-finals and the last-eight of the Vase last year but faded in a congested spring programme that closed with the long-serving Paul Marshall losing his job. “It’s been a pleasure to manage the club and to see it rise from the ashes," he reckoned.  “I just hope that the dedicated group of fans we have amassed over the last few years carry on and grow in numbers". 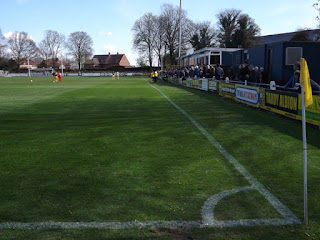 With eight league games to fit into just three weeks, new manager Billy Miller had guarded against fatigue by adding ex-Sheffield Wednesday striker Richard Creswell and Sébastien Carole - a French midfielder once of Monaco, Leeds and Brighton - to the squad for the visit of leaders Handsworth Parramore, unbeaten in 17 games themselves and two points clear of the home side in the single promotion place. "A massive match," Miller thought.  "A gigantic battle," echoed Non-League Yorkshire in its preview of the game. "Win today and we go top," said an old bloke in an Albion bonnet at one end of the temporary footbridge which now links the bus station to the car park at Tadcaster's Ings ground, where attendances have swelled to 350 from an average of just 106 in 2012-13.  "They're expecting 700 today," said someone checking the Leeds score on his phone. "Are you off to York City?" a bloke asked his mate in the main street.  "Nah, I'm going down to Albion.  Better than watching that shite, isn't it?"  In the Angel and White Horse pub, a pint got me change from a £2 coin and the talk was all about the game.  "There'll be lots of nerves this afternoon," one drinker reckoned.  "Lad I know's giving up his Leeds ticket next year and coming here instead," another said. 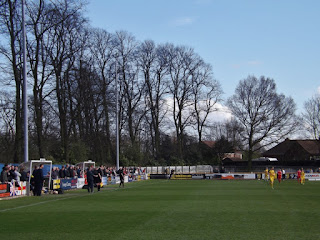 There were early queues at the turnstile block, where a friendly raffle seller handed out free sweets and three i2i coaches were discussing UEFA A Licences in Bulgaria.  A bear mascot patrolled the touchline, the packed clubhouse and portakabin toilet block were on the near side and there were a pair of seated stands - one flatpack, the other in several different colours and topped with a canvas roof - behind the brewery goal.  "Handsworth have got the two top scorers in the division," nodded one of a cluster of middle-aged blokes in Tadcaster scarves. "Hope you're better than last week's," someone yelled at the referee.  The teams formed up to the noise of 'Tad All Over' piped over the PA.  "Come on, eh!" a dozen voices encouraged simultaneously.  "Let's start fast," Albion's keeper clapped, though it was Parramore who had the first sights of goal, the ball deflecting away off the keeper's thigh before he easily gathered a shot that was scuffed along the ground. With just 11 minutes played, the visitors work down the left, Danny Buttle hung up a cross and Jon Froggatt blasts in his 33rd goal of the season.  "Number three, you're too slow," a home fan yelled repeatedly.  "Plenty of time yet," a wiser voice countered.  The Handsworth support was still smiling as the home side pushed forward,  Josh Greening turning in the equalising goal after the ball bobbed around Parramore's six-yard line.  Seven minutes later a pass put Greening through on goal and the leaders were behind. "Easy, easy," crowed the clubhouse partisans.  They were even happier just before half-time, Handsworth's keeper Archie Sneath red carded for clattering Tom Corner as he lifted the ball towards  goal. "Unbelievable," said Parramore's Twitter account. At the other end of the pitch, Gary Stevens shook his head and then jogged over to shake Sneath's hand as Tyler Bates - "a defender from our U17s, he just put his hand up and said he fancied it," a substitute said later - picked Corner's penalty out of the net.  The away fans muttered their complaints.  "They're buying it," moaned one unfairly.  "He wasn't even the last man," said another, his view slightly clouded by the hundred-metre distance to where the incident took place.  "You've got to feel sympathetic for them," was Billy Miller's more even handed response.  "You can see their frustrations." 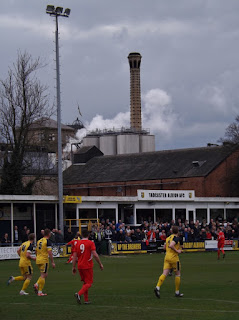 A man down and with a teenage outfield player in goal, Handsworth made the switch to three at the back.  "They're going for it," said a fan as the ball was lobbed forward, Bates missed a punch and Corner headed in his second goal.  "4-1," groaned a bloke in a Sheffield Wednesday tracksuit.  "Owt on target's going in here, isn't it?"  Undeterred, Parramore kept going, Simon Harrison payeting a free kick into the corner as Tadcaster were pushed back by the spirited away side. "They think they've won it already," an old bloke grimaced as the left back cushioned a cross which just missed three red shirts.  After the shock the home team reasserted their advantage, Greening completing his hat-trick after Bates parried a shot.  "We are top of the league," sang the home sections of the 631 crowd.  "Just one of them days," said a Parramore fan. 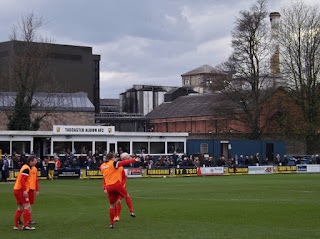 "Very happy man," Gore tweeted later. "Fans were immense today.  Can't stop smiling."  First by a point and 24 goals, the next challenge for the admirably progressive club is Tuesday's visit of relegation threatened Armthorpe Welfare, from the Doncaster suburb where Kevin Keegan was brought up.  "A brilliant result for us," Billy Miller said later. "It'll go right to the wire, no doubt...the plan's now just to get through the next two games."