What, to paraphrase John Cleese, did the Romans ever do for Fréjus and Saint-Raphaël? Well, for starters there was sanitation, education, fresh water and wine, provided for the veteran troops of Julius Caesar's Eighth Legion. Augustus later crammed its harbour with what remained of Antony and Cleopatra's fleet after the naval rout at Actium, the undisputed match of 31BC.  Gnaeus Julius Agricola, future consul and governor of the bad lands of Britannia, grew up on the Fréjus side of the bay, Saint-Raphaël, founded as a beach resort for retired soldiers, taking on the genteel part of Bournemouth to Fréjus' raucous, battle-scarred Pompey. 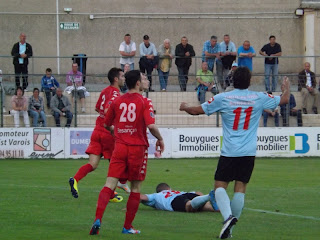 The roles were reversed as soon as football hit the south of France, Stage Raphaëlois lifting six Riviera Championships in the seven seasons preceding the Great War. In 1912 a line-up including Wallace, Rushford, Baird, MacLaren and Victor Bentall-Sergeant captured a national title in Paris's Stade Colombes, beating defending champs Stade Helvétique de Marseille, Lyon and Tourcoing - hometown of Yohan Cabaye - before seeing off local favourites French Sports Association 2-1 after extra-time in the final. Semi-finalists in the 1927 and 1929 Coupe de France, Stage's time in the sun ended in 1932 when their application to take part in the first professional French Associaton Football League was rejected, leaving the amateurs in the shade of AS Cannes and OGC Nice.  It was another six years before Etoile Sportive Fréjusienne started out on the opposite bank of the River Pédégal, reaching the minor heights of a fourth division title in 1991 and later developing the likes of Anthony Modeste, the Nice striker who spent part of last season on loan at Blackburn Rovers, former Newcastle United, Portsmouth and Stoke City midfield carthorse Amdy Faye and Adil Rami, the Lille double winner last seen lumbering around the heart of Laurent Blanc's Euro 2012 side in a manner reminiscent of England's own John Terry after ten pints of lager, a chicken madras and a heavy night with 'er next door. 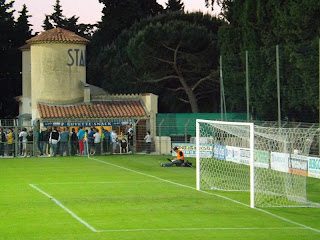 The queue for beer and suspect baguettes.

Seventy-odd years of mutual insignificance later, the neighbouring clubs decided to pool forces in June 2009. "Times have changed. The rivalry between the two cities are of another age," said George Ginesta, deputy mayor of St. Raphael, announcing the formation of Étoile Fréjus Saint-Raphaël. After finishing eighth and sixth in their first two seasons, Étoile have dropped to midtable in the Championnat National, the third-tier of French football, ahead of the final home game of the season at the 3,000 capacity Stade Pourcin, which, despite the promise of entry gratuite taped to the ticket office windows, is less than a third full for the visit from second from bottom Besançon. "What else do people do on a Friday night in the Cote d'Azur?" asks Bolton fan Mark, one of fifteen newly-qualified teachers I'm training here for a month, as he bites through a three-euro baguette. Allowing for its slightly dubious pinky-brown filling, the food proves a much bigger bargain than the beer - €2.50 for a half pint - we spend most of the first half repeatedly queuing up for. 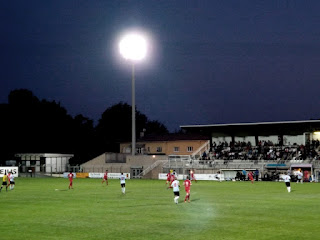 The home side start slowly, caught flat-footed in defence as Charly Vuillemot puts the relegation battlers into a sixth-minute lead. Nottingham Forest Academy graduate Victor Hernandez soon levels from the penalty spot, local boy Eyemen Henaini adding a quickfire second to give Étoile a twelfth-minute lead.  While eight hundred fans applaud the six-seater press box is empty and there isn't a TV camera in sight. "There's something cool about knowing no-one will ever see those goals again," grins Huddersfield supporter Ben through a mouthful of Kronenbourg. Galvanised by the double success, Étoile pour forward, smashing one shot against the crossbar and tapping another straight at the last defender after keeper Willy Maeyens is left stranded in the Besançon goal. "It should be about 9-1 here," says Ben.  The final scoreline could have been "a tad heavier", reflects Étoile's official match report later, with Gallic understatement. Substitute Laurent Maquet finally puts the game to bed with his second goal of the season on seventy minutes, the ex-Cannes and Charleroi midfielder slamming a first-time effort right-footed into the corner of Mayens' net.  A soft penalty reduces the deficit in the final minute of normal time, Lakdar Boussaha beating Wilfried Bulgare after the slightest of touches sees Youssouf Ahamadi fall poleaxed to the ground, but when Mayens strays upfield for an injury time corner Jordi Delclos easily outpaces the sole remaining defender, passing the ball into an empty net for the game's sixth and final goal.  We head back to Saint-Raphaël's seafront for red wine and cocktails, lights twinkling along the bay and palm fronds swaying gently in the Mediterranean breeze. "Not a bad night, all things considered," thinks Mark. "Better than watching Bolton anyway." 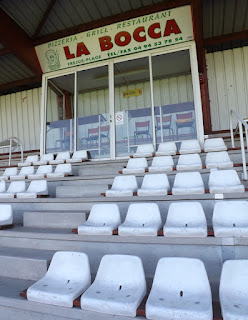 Admission: Free (normal price €10 for the covered seats in the tribune and half price for the open terraces of the populaires)
Date: May 11th 2012 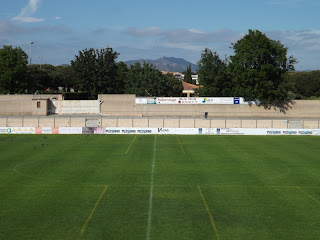