When I tell people I've been to places like Bristol, Norwich, Lincoln and Oxford, I usually mean I've seen them in the way teenage football fans do, which is to say that rather than the Bodleian, the Ashmolean Museum or Christ Church Cathedral I had an open terrace at the Manor Ground, a black-and-white santa hat and the unwanted present of a 4-2 defeat three days after Christmas 1992. While I might not have any photos of Cabot Tower or the Clifton Suspension Bridge, I did watch Harry Palmer make a memorable early contribution to the Bristol Sound in a pub by Ashton Gate.  Norwich Cathedral was an attempted short cut between beers; in Lincoln, I missed England's oldest inland harbour and what Ruskin called "the most precious piece of architecture in the British Isles" and saw instead a football stand sponsored by the Co-op and a backstreet boozer filled with black and white shirts.  Back in the city 21 years later, the road to Sincil Bank had a Polish barber's, a Wetherspoons and a Chinese restaurant called 'Legal Food'.  I crossed Scorer Street, birthplace of Leeds and Sheffield Wednesday striker Lee Chapman, and followed a sign pointing left between two rows of terraces to a familiar cantilevered stand...

It's not every day you get to see the world's most expensive footballer make his debut for your team.  We were due a bit of a pick-me-up: in the past few months Newcastle United had let slip a 12-point lead to lose the Premier League title to Manchester United and Germany had beaten England on penalties (again) in the semi-final of Euro '96.  Football wasn't coming home but the bloke who'd just won the Golden Boot was. "This signing  shows you the ambition of Newcastle United," Kevin Keegan told the assembled media in Bangkok. "We are the biggest thinking team in Europe now."  Back home in Newcastle, shops had already run out of letters to put Shearer on the back of black and white shirts. "Can you imagine being Alan Shearer?" posed a disbelieving presenter on Lincolnshire local news.  "You're a 25-year-old son of a sheet metal worker and not only are you set to pick up around £1.5 million as your cut of the £15 million paid by Newcastle but apparently if you're Alan Shearer you'll be on £30,000 each and every week."  It was just five days after the Magpies had been thrashed in Japan by Gamba Osaka and three since Shearer was presented to a 15,000 crowd in a rain drenched car park outside St James'. "This is your day,"  Kevin Keegan told the delirious masses.  "You've bought the shirts and the tickets and put the money in and I've invested it so we can have the very best on the pitch." 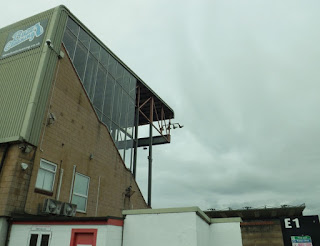 Around 2,000 more were at Lincoln City's Sincil Bank, with the same number again trying to get inside.  Outside the ground, tickets were changing hands for four times their face value.  "Every seat in the 11,000 capacity stadium has been sold," Peter Sissons told the nation on the Six O'Clock News. "Lincoln had probably not seen an invasion of its like since the city's castle was stormed in 1644," the Independent reckoned the following day.  The game had been arranged as part of Darren Huckerby's £400,000 move to St James' Park; the Imps were losing £10,000 a week and were struggling to find three times that amount to sign Kevin Austin from Leyton Orient.  "We'll probably make £80,000 from tonight," Lincoln's grateful managing director told the BBC. 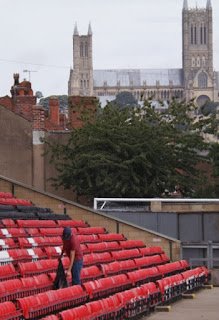 It took 18 minutes for Shearer to get his opening shot on target and 15 more for his first Newcastle goal, slamming a penalty one way while ex-Cramlington Juniors teammate Barry Richardson leapt the other.  "Shearer! Shearer!" we roared unimaginatively as he shook hands with Robert Lee and Peter Beardsley and ambled back to halfway.  On the hour, Tino Asprilla played in Philippe Albert for a second.  "Ye kna," the bloke in front told his mate, "we'll win the league with Shearer in this team."  Veni.  Vidi.  Vici.

Two days later we got thumped 4-0 in the Charity Shield at Wembley.  World's most expensive player or not, some things never change.
Posted by Michael at 11:26