It's been a tumultuous few years for Morpeth Town FC.  After three seasons in the upper echelons of the Northern League top flight, the Northumberland club slumped to 21st in 2010 and from there to the foot of the two-division league just twelve months later.  Along the way they lost three managers, two squads of players, had to groundshare for a year at Bedlington Terriers while their own facilities were repaired to Northern League standard, and only managed to avoid successive relegations because, with only two clubs from the feeder leagues eligible for promotion, there was still a spare place in Division Two. "I've lost two stones since I took this job, had to take off a fortnight off work through stress and am still spending every spare moment here," chairman Jim Smith said.  "I'm getting experience here," player-manager Trevor Benjamin told the Daily Mail last year. "A different experience." 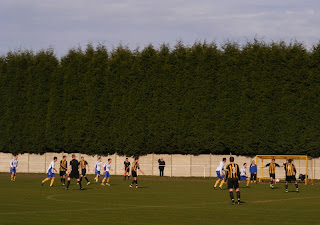 The support of Ken Beattie - described by Northern League chairman Mike Amos as a "long time former Morpeth player, chairman, benefactor, bankroller and occasional source of much head banging frustration" -  kept the club alive through years of two-figure attendances, the ticket revenue barely enough to cover the £120 that had to be split between the match officials after every home game.  Last season, beset by vandalism and without any heating at their ground, Town came within weeks of folding altogether near the close of a thirty-eight game campaign that ended with four wins, thirty-one defeats and a goal difference of minus ninety-eight. 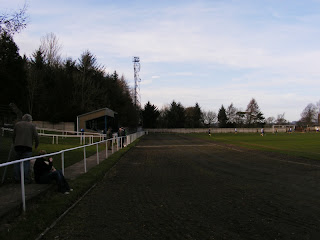 Benjamin had arrived in September after twenty-seven clubs, an England Under-21 cap and a £1.3 million move from Cambridge to Leicester, where he was signed to replace the Liverpool-bound Emile Heskey and left five years and eleven goals later [insert own joke here]. Unable to stem the tide on or off the pitch, Benjamin and assistant manager Oliver Bernard departed at the end of the season, Nick Gray and half his Seaton Delaval Amateurs side brought in as replacements. After a slow start - just two points coming from their opening four league games - Gray's team have shot up to second in the table on the back of fourteen consecutive home wins and the forty-six goals shared by Steven Anderson, Chris Lunn, Ashley McAlpine and David Dormand. With seven games remaining and third-placed Gillford Park the visitors next weekend, a place in Division One is suddenly Morpeth's to lose - a massive turnaround for a side who began the season with few more ambitions than to avoid being  "one of the whipping boys". 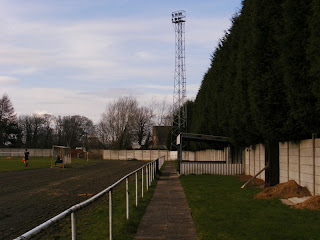 Beaten last time out by promotion challengers Hebburn Town, midtable Whitehaven have little more to play for than the mood on the hundred-mile bus journey home. They arrive with just two substitutes; their starting eleven has a right-back in a number ten shirt and a centre-forward wearing number two.  "We're all here, as usual," says one of a group of three pensioners taking up a seat in the covered stand. "It's terrible, Jack. For a town the size of Morpeth it's pathetic." "Ah kna," agrees his mate, "they could play in the market place and people still wouldn't bother going. I was here midweek and there was a crowd of thirty-six. Thirty-six!" "I was away," the third one says, apologetically fingering the Morpeth scarf draped around his neck. "By, it's busy up here," jokes a woman in a club jacket, arriving from the garden shed that's been converted for use as a turnstile booth. The reporter from the local Sunday paper finishes copying down the teams from a whiteboard propped against the clubhouse wall, making a crowd of five in the back of the hundred-seater stand.  Conifer hedges keep the vandals out and a mud track, once used by Morpeth Harriers Athletic Club, loops around the pitch. "Looks more like a greyhound stadium," says James Williams, now on leg thirty-nine of his attempt to visit all forty-four Northern League grounds in a single season.  "I think this is the first time I've had nice weather at a game since Chester-le-Street in August."  Morpeth's substitutes warm up with an orange ball, an upturned wheelbarrow and a metal pitch roller behind either goal.  The teams come out, their studs clattering on the concrete path, and form two lines for the ritual handshakes: "All the best", "All the best", "All the best", "Have a good 'un", "All the best", "All the best".  I count twenty-one people, one dog and six cameras spread along the touchline, a couple dozen more drifting out of the bar once the game gets underway. 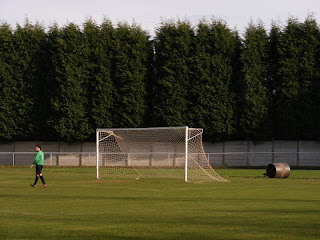 With Morpeth's giant defenders mopping up everything at one end of the pitch and the their midfield still finding its range at the other it takes twenty minutes for either side to fashion anything approaching a chance, Chris Lunn crossing for Andrew Keenan, who flicks his header wide of Whitehaven keeper Stuart Pettit's left-hand post.  Morpeth have a goal disallowed, hit the post twice, have a shot booted off the line and a promising attack foiled by some debatable decision making from the assistant on the far side of the pitch. "How the hell can you play yersel' offside, liner?" asks a Morpeth fan. "Even me dog could've spotted that one, man." "Ref, that's fucking embarrassing that, like," laughs a player. "The worst decision I've ever seen from any official," thinks James. Morpeth play a direct game, Whitehaven a disconnected one, their two forwards left to chase after balls that end up on the running track before the second bounce. "It's impressive enough that they turn up, the distance they have to travel every other week," James says. At half time everyone troops into the clubhouse, where there are pies on plastic plates, hot drinks in china mugs and racing from Newcastle on Teletext, the Six Nations rugby relegated to background noise. 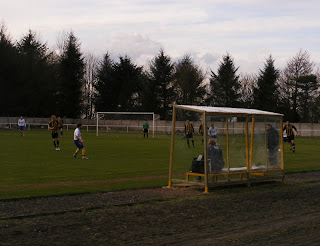 Gray swaps a midfielder for a forward at the start of the second half, Connor Andrews replacing Jordan Fry.  Andrews stumbles over his first chance at goal but tucks the second into the corner of Pettit's goal with half an hour still to play.  Steven Anderson adds a quick second, the clang of metal drowned out by cheers as his shot goes in off the post, and Danny Young, on for Chris Lunn, scores a third, collecting a pass from Callum Morris and skipping past two defenders on the edge of the box. In between,  Steven Mundy beats a goalbound Leigh Dunn shot away as the visitors briefly enjoy their best spell of the game.  "Deeper rather than tighter, now.  Deeper rather than tighter," comes the shout from Whitehaven's underpopulated bench. "You're playing for your pride now."

"Torned caad, hasn't it?" says a Morpeth fan as the referee blows for full-time. "Mind, another good win." With Hebburn taking three points at Gillford Park, it's a vital one too. 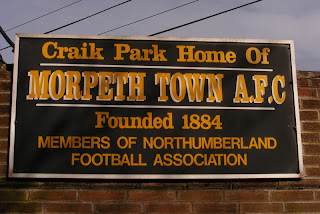