Things to do in Rhyl: spend the day at the indoor Suncentre, see the Sky Tower (currently closed for repair), stroll along the beach as far as Kinmel Bay in one direction or Prestatyn in the other, play mini-golf, have a ride on the Rhyl Miniature Railway, watch a show at the Rhyl Pavilion Theatre, try and win a toy in SeaQuarium's Sharky Shack Fun Zone, scoff a Corfu Kebab, have a meal in the Welsh Curry House of the Year - "Classy Kareem's is a Spicy Choice" - or head straight for one of the bars on Sussex Street: Viva, Revive, Rendezvous or JD Wetherspoon. Me? I did none of the above. I watched Rhyl FC Reserves. 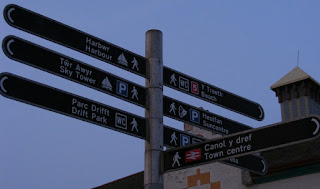 Which way to the Kandy Kabin?

"Few clubs in the Welsh Premier League have as distinguished a past as Rhyl's," the club's official website boasts.  They're not wrong. Four-time Welsh Cup winners and twice champions of the principality's big league, the team from the North Wales seaside managed fifteen successive appearances in the FA Cup first round or better between 1949 and 1963 - beating Stoke City, Barnsley and Notts County along the way - and  knocked Lithuania's FK Atlantas out of the 2005-6 UEFA Cup before exiting over two legs to Roy Hodgson's Viking Stavanger. Beat that Afan Lido.

Rhyl's problem is that they're not actually in the Welsh Premier League. Now volunteer-run, the 140-year-old club had the eject button pushed on them at the end of the 2009-10 season, sent down to the Cymru Alliance despite finishing sixth in the eighteen-team top-division.  "The standard we have reached has exceeded the ability to finance itself," former club secretary Joe Pearson-Furnival told the WPL website. "We get very little financial help from our own FA and the financial demands of the players has now caught up with the lower leagues in the English game."  While pushing for promotion on the pitch, the club have made improvements off it too.  Nonetheless, finances remain tight: signs invite local companies to sponsor a seat for £5 a season and the club recently had to ask fans to help raise the £2,000 cost of repairing their pitch mower. 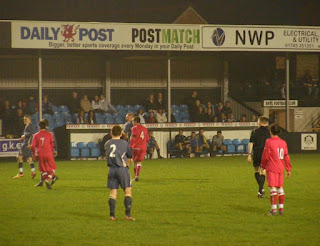 Tonight's game is the semi-final of the North Wales Coast FA Intermediate Cup, the club's second stringers taking on Rhyl Athletic, formed in 2009 and currently midtable in the Clwyd Football League Premier, two divisions below Rhyl's first team. Before kick off the couple of hundred fans manage a rousing minute's applause in honour of the recently deceased John Wright, head steward, junior football coach, general manager of the reserve team and father figure to many at the club. Executive seats are reserved for members of the Wright family, the home players warming up with RIP John printed on the front of their t-shirts and personalised messages written across the back.

"Pass it," "Keep it," "Win it," "Get the ball," "Shit!" the visiting bench shouts, though their team matches the home side until midway through the opening half when James Stead controls a pass on the right wing and slams it over the Athletic keeper's head into the far corner of the net.  "Great goal," says the very friendly woman who's just sold me a pie and polystyrene cup of tea for the bargain price of £2.50.  "What do you do for a pound?" ask a couple of teenagers. "You can have chips, you can have two sausage rolls, two bars of chocolate."  "Where are they tomorrow?" asks another customer. "We're away at Connah's Quay.  I'll have to watch it on Twitter." 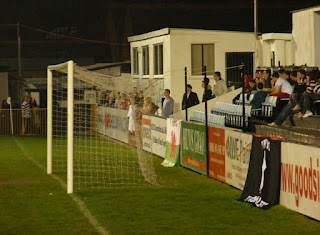 In Mike Hulse, James Malloy and ex-Oldham Athletic junior Stead, the home side have the game's three most lively and inventive attackers.  Athletic have a lot of possession but their attempts to work openings down the right founder every time they reach the edge of the area.  Two minutes after the interval Stead adds the second goal via a free kick which takes a deflection and goes over the goalkeeper's head.  "Sunny Rhyl, sunny Rhyl, sunny Rhyl," a few children start chanting behind a skull and crossbones flag that has the words 'Sunny Rhyl West End Boys' emblazoned across it  in white.  The hardworking Malloy adds a third six minutes later as the home side, pacier and sharper on the ball, begin to dominate, though some good goalkeeping, several subsitutions and the linesman's flag combine to keep the score at three-nil.  Rhyl go through to the final to await the winners of Beaumaris Town versus Prestatyn Rovers. With the first team second in the league and into a semi-final of their own, the sun might not quite be back out yet - but it's definitely inching through the clouds. 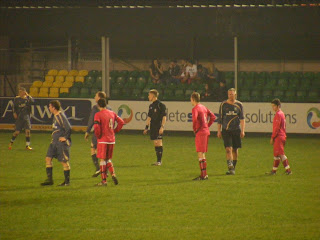