All things considered, it's been quite an opening ten months for Sunderland West End. A suspected outbreak of Legionnaires' disease caused the abandonment of one game, eleven league wins in a row were followed by four defeats in five, one star player is out for the season, another - the leading scorer - moved up a league and two divisions after fourteen goals in sixteen games. And all that before you  even get started on the 3-0 cup semi-final defeat the very same week their joint-manager quit the club after six years in charge. 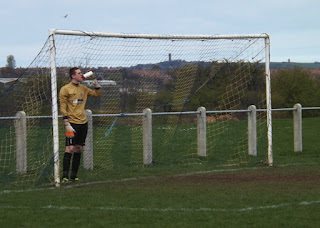 Pennywell's Jolly Potters had won three Wearside Combination titles in a row when they were grafted onto Wearside League strugglers Houghton Town - themselves a former former pub side  - at the end of last season. The combined team took Town's league place, playing daylight games at the council-owned Ford Quarry complex in Sunderland and their floodlit fixtures back in Houghton-le-Spring.  West End and Prudhoe Town have jumped from the bottom three in 2011 to seventh and twelfth, scoring 134 goals and conceding 133 in the 61 league games they've played this season.  The reverse fixture ended in a 3-3 draw and Prudhoe's Chris Winn is on 31 goals after scoring twice in the 4-3 midweek defeat to leaders Ryhope Colliery.  The only things more certain than goalmouth action in this game are a player telling the referee he's "fucking joking" and a lone man turning up with a dog. Bingo to both in the opening ten minutes.

The other spectator has come by bike, propped against the metal railing while he reluctantly does ballboy duties every time Prudhoe's four substitutes miss their shot at the empty goal.  Boof! "Cheers mate." Boof! "I told you I wasn't a forward." No walking after stray balls for me.  I head towards the nearest solid surface as the two teams emerge from the clubhouse, nine home fans and a referee assessor - wielding a clipboard and stylishly attired in slacks and an Air Asia jacket - following in their wake. 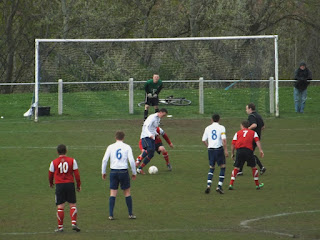 Dave Keithley has West End's first shot on target, drags a second wide and watches Gavin Dorward toepoke straight at the keeper with the midfielder clean through on goal.  The main action at the other end is the referee ordering Chris Winn off the field to change out of his undershorts. "Darker colour than the rest of your kit," he explains. "What do you want, me testicles hanging out? Give yer head a shake."  Winn, alone up front, finds tucking balls away a bit more difficult back out on the pitch, scooping over the bar when a blocked clearance falls straight to his feet.  Despite the scare it's West End who go closest, Michael Wharton's low shot fingertipped around the metal post by Prudhoe's Mark Fish. "Tighter, you've gotta get tighter," rages the away team's coach, a Steve Kean lookalike only five times more manic and dressed in a bright orange top. "You're not staying with the runners."  Fish scuffs a kick straight to Keithley, who's too surprised to do anything but prod it straight back. "Unlucky but it's gone. A mistake but it's gone. We move on and it's gone," clap the Prudhoe bench.  Within thirty seconds Nathan Burrell smacks a dipping free kick that Neal Bussey just about nudges onto the bar. 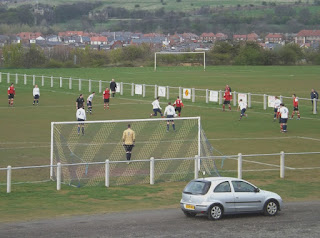 The first chance of the second half falls to West End, the next three to Prudhoe.  Under pressure, a home defender hooks the ball clear towards Wharton, who swerves a rocket from thirty yards out past Fish's left hand. "Helluva goal," clap two home fans who've been sitting in their car with the engine running since the start of half-time.  Keithley adds a quick second, sliding the ball under the keeper after a defensive mistake, and Prudhoe heads drop like Andy Carroll's transfer value. "You're feeling sorry for yourselves," shouts the manager. "We're feeling sorry for ourselves," repeats Nathan Burrell, now pushed up front in support of Winn. Prudhoe rally late on and have a goalbound effort hacked off the line, but with Brad Forster shackling Winn West End comfortably hold on, their eighteenth win of the season lifting them sixth in the table ahead of Darlington Cleveland Bridge.

Admission: Free (there was nobody to collect the usual £2 entry)
Date: April 7th 2012 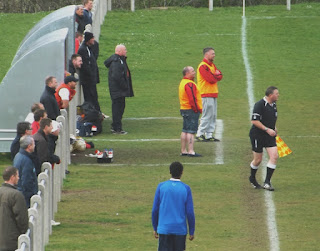 Tommy Thompson, an England international forward who scored over 200 goals in 443 games for Newcastle United, Aston Villa, Preston, Stoke and Barrow, was born on the outskirts of Houghton in 1928.  A next door neighbour of Sir Tom Finney during his six years at Deepdale, he scored 34 league goals in a single season as North End finished England's third best side in 1957-58.