If quantity's your thing then Cyprus is a football watcher's paradise stacked with nearly 60 club sides and four divisions in the area administered by the CFA alone.  Add in the 48 teams and four tiers of the KTFF (Cyprus Turkish Football Federation), regular European and international fixtures,  politicised ultra groups,  a plethora of refugee clubs and an improving domestic league - in the south at least - which provided a Champions League quarter-finalist as recently as 2012 and you have one of the continent's most diverse footballing landscapes. 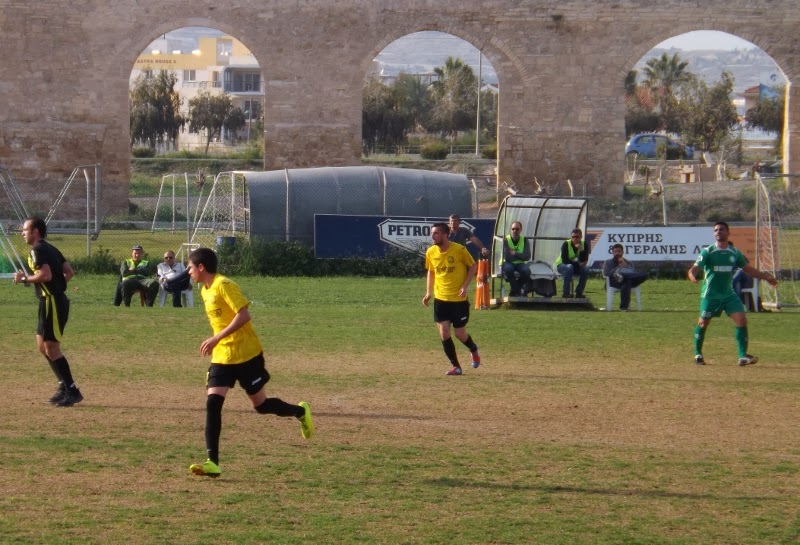 The Larnaca region is no exception, providing five of the top flight's fourteen sides (two more are based in neigbouring Famagusta District), a quarter of the sixteen teams in the Second Division and another three of the third tier.   ASIL Lysi, formed in 1932 in a Famagusta village which fell to Turkish troops 42 years later, now play their home fixtures at a Larnaca stadium named after the Lysi-born guerilla fighter who was second-in-command to General Grivas during much of the struggle for independence from Britain.  The bobbled pitch and floodlights are at one end of the Salt Lake hiking trail, a four-kilometre walk from the seafront next to the remains of an 18th century acqueduct and the highway to Limassol.  Only one side is open to spectators, four tiered rows of blistered, chipped and uncovered wooden benches split into two sections by the entrance to the ground, a skeletal roof partly shading twenty or so white bucket seats that still smell of paint.  A static caravan sells ice cream and soft drinks, the entrance is paid into a box on a trestle table and the dug outs have garden chairs at the end to fit in all the substitutes.  A fence topped with barbed wire separates the crowd from the pitch, dust-brown flecked with green, its touchlines leisurely whitened while the players limber up.  The home fans drape yellow and black banners over empty seats, a solitary Greek flag twisting in the wind.  The travelling AE Zakakiou support arrives from Limassol in a convoy of cars, one setting up beside me with a handheld video camera as the teams take to the field. 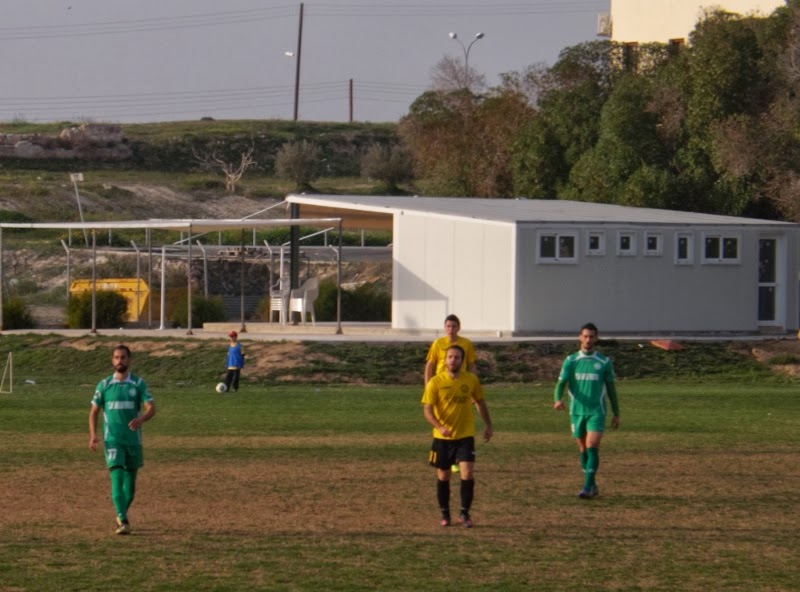 After a placid opening ten minutes, Lysi almost have the ball in the net when an ankle-high cross is cleared against the goalkeeper's chest and is eventually claimed at the third attempt.  Commendably, both sides try to keep the ball on the ground, despite the surface doing its unlevel best to ensure it's more often played off the shinpad.  The home keeper saves from distance and sees another shot rebound off his crossbar, the Lysi bench loudly dispute a throw-in and their fans rise to celebrate a goal but get two miscontrols and the referee blowing for a foul instead.   The burly Zakakiou number 55 accelerates into space, cuts inside a pair of challenges and fires straight against the fence, Lysi retorting with a free header that clears the bar, smacks into some property hoardings  and brings the first half to a close. 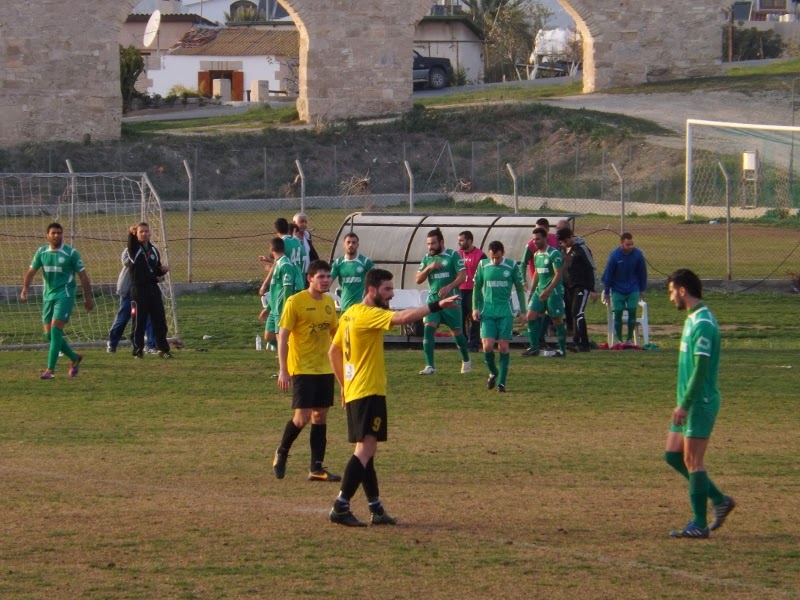 The second begins with the yellow and blacks on the back foot,  a Zakakiou forward sliding to turn in a cross but seeing the ball bounce through his legs and trundle away.  The play settles into a mid-afternoon torpor soundtracked by yells of frustration and the monotonous beeping of a child's smartphone game, which is finally disrupted when he rolls off the stand.  With only minutes remaining a green shirt is felled in the box, number 55 converting the penalty by way of the keeper's hand.  The away team celebrate a win that maintains their slim chances of promotion to the higher of the Second Division's two groups, Lysi's players - now with a seven-point gap to claw back to avoid being relegated to the Third Division - make the universal gestures of defeat, haranguing the linesman, bowing their heads or just pointing into space.