I came to Cyprus because of Temuri Ketsbaia, the Georgian forever lodged in my memory for his engraged, wild-eyed hoofing of a St James' Park advertising board and an extra-time leveller in Zagreb which put Newcastle United into the Champions League group stages and left us few dozen independent travellers with a journey back to the centre reminiscent of The Warriors' return trip from Van Cortlandt Park.

Ketsbaia's five years in Britain - three on Tyneside and one apiece in Wolverhampton and Dundee - were bookended by lengthier periods in Athens and Cyprus, where he scored 72 goals in 175 games in two spells at Anorthosis Famagusta, the island's oldest club.  As coach he famously led his side to two titles and a Cypriot Cup, outwitted Trabzonspor and Olympiacos in Champions League qualifiers, and came within a whisker of the knockout rounds in 2008-09, defeating Panathanaikos, twice holding Werder Bremen and taking a point and a single goal loss from two games against Jose Mourinho's Inter Milan.  Four months later he was gone and the "brightest chapter in the 98-year history of Anorthosis" was at an end.

"Ketsbaia is a great coach but a very rude man," Marinos says as he checks me into his hotel.  "But football in Larnaca is not the same since he left."  "What's your team?" I ask. "I like football," he smiles, "which is why I support APOEL."  It's an answer which goes some way to explaining the malaise currently afflicting the town's five top-flight clubs.  While up to 1% of the country's entire population watch the Nicosia side's home fixtures, attendances at  AEK Larnaca have latterly slumped below 1,000,  cash-strapped, already relegated ALKI  have minus 35 points after 23 matches and  could disappear altogether before the end of the campaign, and disgruntled Anorthosis fans recently stormed into stadium offices attempting to oust the board of a club that is more than €12 million in debt and on to their third coach of the season. 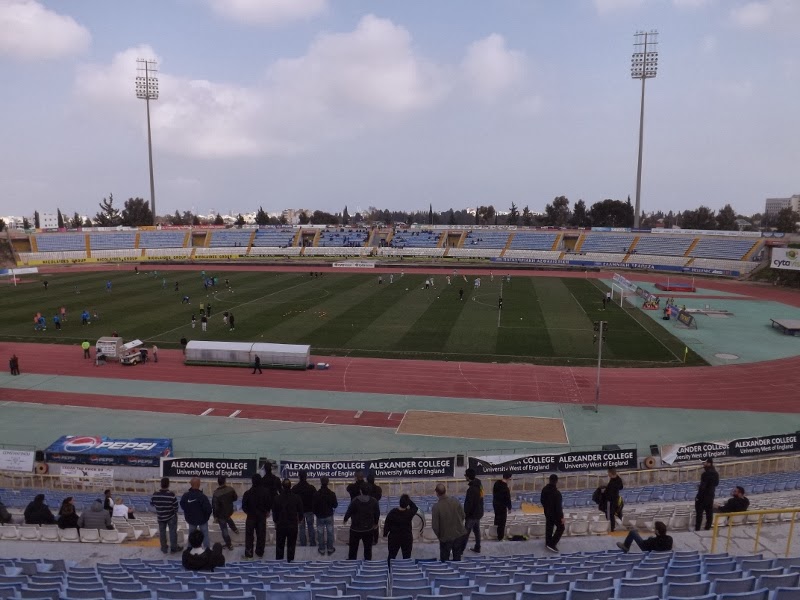 The televised AEK  - Anorthosis derby was the highlight of the six league games played in and around Larnaca over the weekend, though with both sides - third and second in the 2012-13 First Division - mired in midtable first impressions weren't particularly encouraging.  The two-sided stadium, a 45-minute walk north of the beachfront near a hospital, industrial zone and the Aradippou road, was all but deserted when I arrived with only two working two ticket booths and more riot police than supporters on show.  Empty rows of dirty blue and white bucket seats curved around the straights of a running track, the only shade  provided by a corrugated roof above the VIP section and a canvas tunnel reaching over a concrete ditch towards the disused long-jump pit.  The opposing ultras arrived just before kick off, AEK's small contingent sport matching black hoodies and leave their drum unattended while trading shouts across the pitch, the blue-shirted Anorthosis fans breaking off from tying banners to engage in some energetic arm waving. 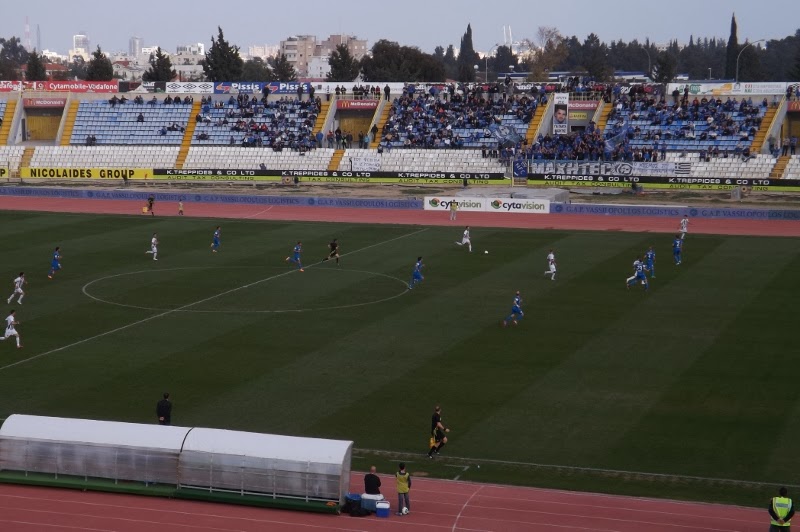 The Famagusta end gets a clap-and-stomp number started, the home fans silent until the 12th minute when Kyriakos Pavlou - one of only five Cypriot players on the pitch -  scrambles the opening goal past former Ligue 1 title winner Mathieu Valverde.  "AEK ole, AEK ole, AEK ole, ole, ole!"  Sedate toing and froing makes up the remainder of the half, the toothless visitors shading possession but never seriously threatening Miguel Escalona's goal. In the second half the funereal pace of the Anorthosis fans' chanting is matched by the passage of the ball around their midfield.  The first time the blue shirts manage to pass their way to goal Moshe Ohayon can only hit Valverde's legs, the second - Roberto Colautti scooping over with the Frenchman stranded - immediately precedes Vitaliy Ivanko's solo bundle through the Famagusta defence, Colautti taking his head from his hands just long enough to see the ball nestling in the opposite net.  A late, deflected consolation from Andreas Avraam is greeted with jeers, more arm waving and sullen indifference, Anorthosis's fifth defeat in six games leaving the pre-season title favourites 16 points off top spot and only six ahead of a place in the post-season relegation round - catastrophic for a club which not so very long ago were drawing with Tottenham Hotspur and Inter Milan. 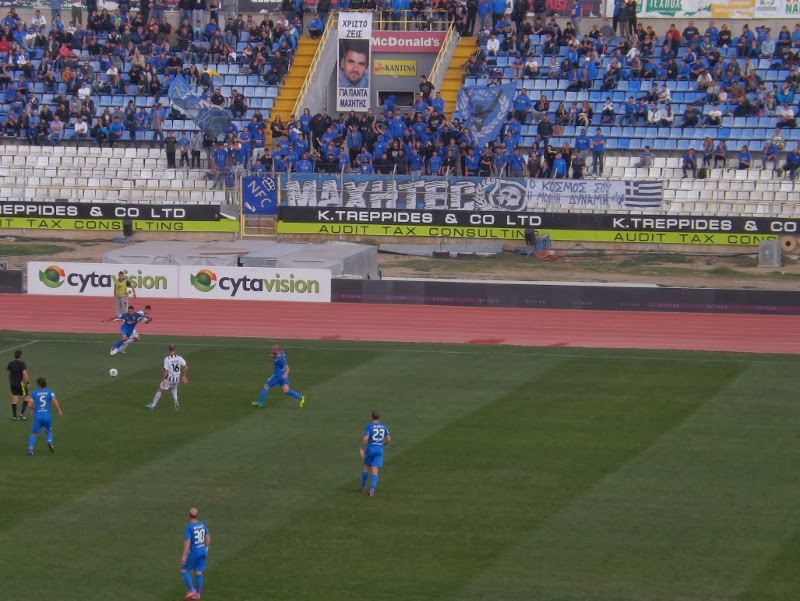 As the 1,500 crowd drift back to their cars, I set off for the centre (passing a fish and chip shop with a Liver bird prominently displayed above the door) to see Omonia Nicosia struggle to a 1-1 draw in Limassol, with only three Cypriots on the pitch and an attendance of 995.  "Neglecting youth is having devastating consequences in every area of Cypriot football," is the headline in The Cyprus Mail. "I'm not a doctor," Ketsbaia said two years ago, but the game on the island - entertaining as it remains for visitors - seems to be in increasing need of some help.