Ruled by Vikings, razed by Normans, Thornaby's been namechecked by Tennyson and home to aviators, the actor Richard Griffiths - later Harry Potter's priggish and Withnail's lovelorn, predatory uncle - and an industrial behemoth that shipped bridges and blast furnaces all over the world.  It was here in 1987 that Margaret Thatcher strolled in heels for the cameras across concrete, dead weeds and the detritus of industry.  "The walk in the wildnerness," they called it, the prime minister recoiling from the litter-strewn, foul-smelling riverbank and later accosted by an unemployed man with 1,000 failed job applications who she blithely told to "retrain." 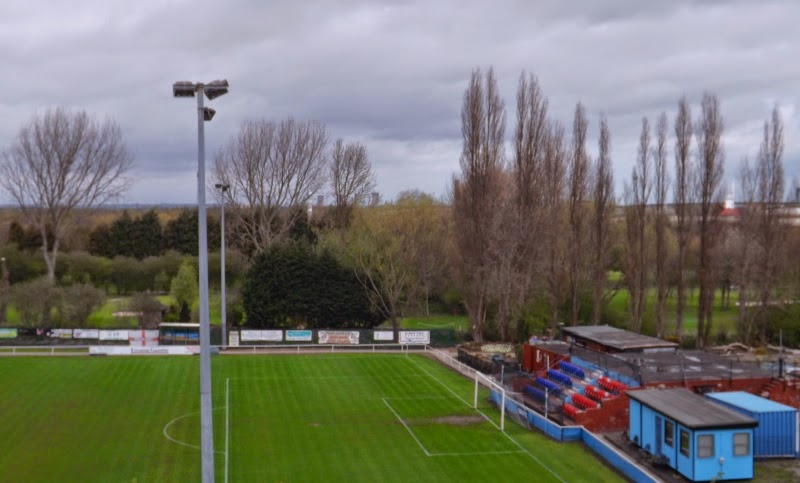 The abandoned factory land included a sports ground used by a Northern League football team which was repeatedly laid waste in the decades that followed Thatcher's latter-day harrying of the north. Vandals smashed, graffitied and torched buildings,  used the pitch as a dumping ground, stole metal touchline barriers and  drove over every single inch of the playing surface. "When I first came here the ground was like a bombsite," team manager and acting club secretary Ray Morton told Northern Ventures Northern Gains in March 2011.  Two months later he received a Northern League award for his work towards saving a team that had been first demoted and then threatened with expulsion due to the constant attacks on their ground.  "The great survivors of the Northern League," one visitor called them. 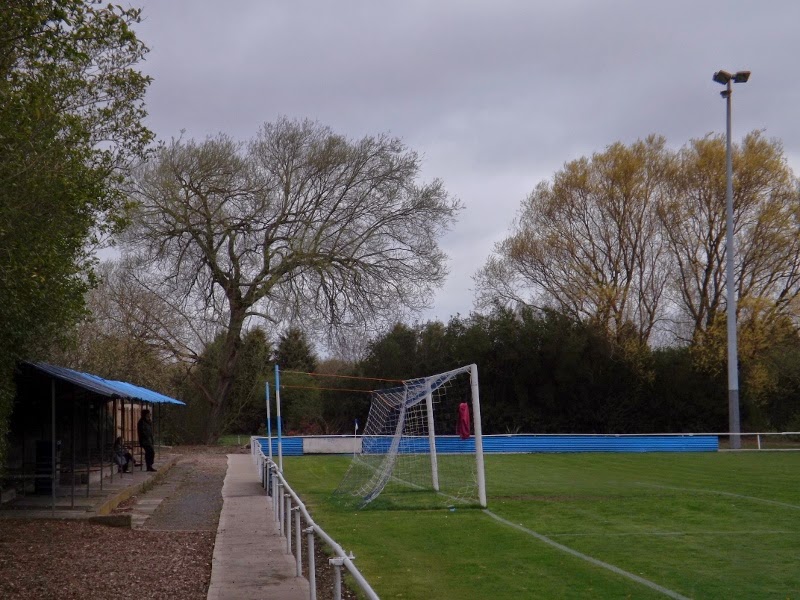 Recent years have seen Thornaby lose a cup final but win accolades off the pitch, using grants, lottery cash, donations and thousands of volunteer labour hours  to impressively spruce upTeesdale Park. Tucked between golf and cricket clubs, a cemetery, and a retail park where Stockton Racecourse once stood,  there are now fitness and nature trails, a clubhouse,  picnic area, teen shelter, junior football academy and even plans for a forest school. "There was a definite need to identify with the local community in a more effective way," the club's matchday programme history modestly explains. The local McDonald's sponsors the ground, while Crimestoppers and Teesside's evening paper supply perimeter hoardings.  A smart new covered seating block remembers Peter Morris, the long-serving secretary who collapsed after refereeing a five-a-side game in 2010, the ground completed by a combination of hard standing, grass banking, a pair of bus shelters, a terrace with corrugated roof and tarpaulin back, and open-air seats, in blue and red, next to an entrance that once needed a full-time guard to keep it secure. 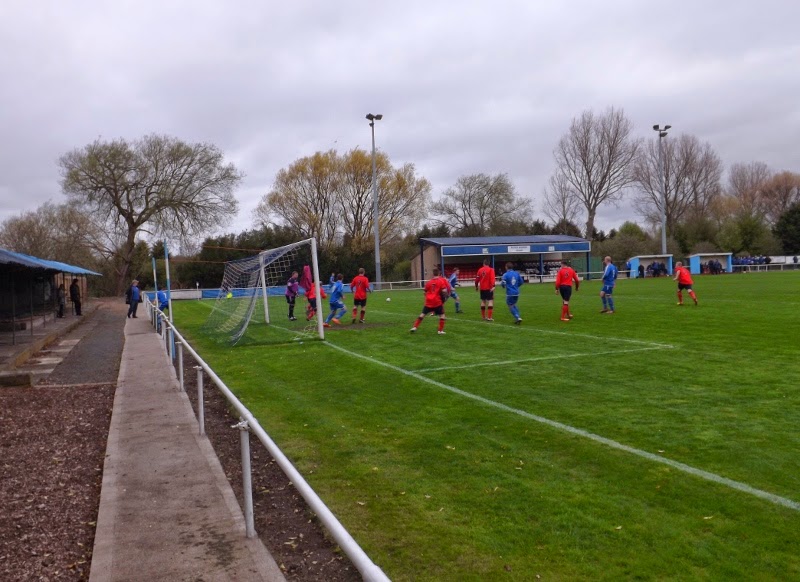 I drive down the A19 with Jarrow Roofing boss Richie McLoughlin, media manager Andy Hudson and Justin Perry, once of Sunderland, Cardiff City, Barry Town and Rhyl.   The 41-year-old striker has played in the Champions League and UEFA Cup and was a mainstay of Roofing's run to the Vase semi-final in 2004-05, but is nowadays more often among the substitutes. "Full game today?"  McLoughlin teases. "I hope not," he laughs.   Pre-season promotion favourites,  the Roofers have stuttered of late with successive defeats to Washington and West Allotment Celtic before a win over South Shields which left McLoughlin's side two points short of Seaham Red Star wth two games in hand and four left to play. "Three more wins does it," assistant-manager Ian Davison says. 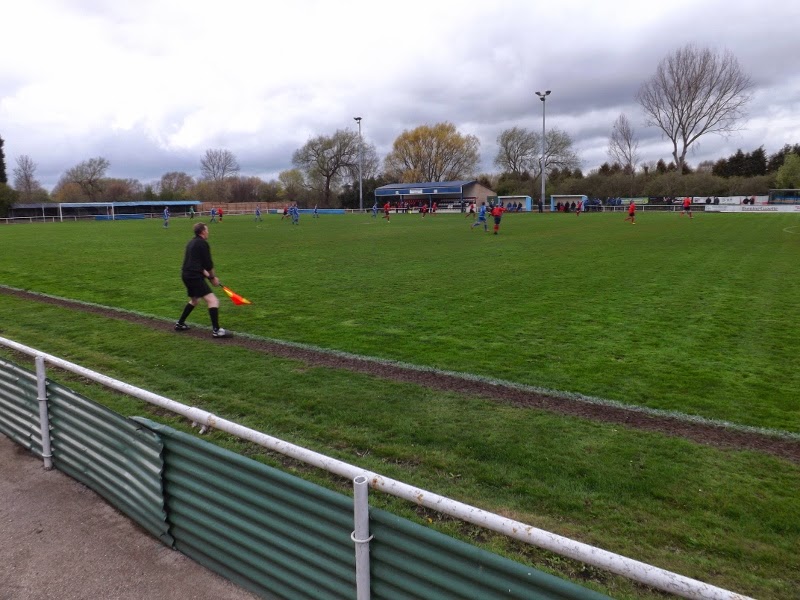 An impeccably observed minute's silence for the 96 victims of Hillsborough precedes a 3.07 kick-off,  spectators bowing heads and players shivering in semi-circles as a cold wind whips across the pitch. Every ball and bit of space is contested, the home side edging the early stages but Roofing's Stuart Nicholson - a former England Under-19 and West Bromwich Albion player in his final game for the club before emigrating to Australia - lofts over after a three-man move also involving skipper Dan Kirkup and Corey Barnes, a 16-year-old debutant for Darlington when they were still in the Football League.  Thornaby's Curtis Edwards loses control off his knee with only Andy Hunter to beat, Barnes clearing off the Roofing goal-line moments later as the Teessiders surge forward. "We only need one goal," a Thornaby fan says as the teams clatter off at half-time. 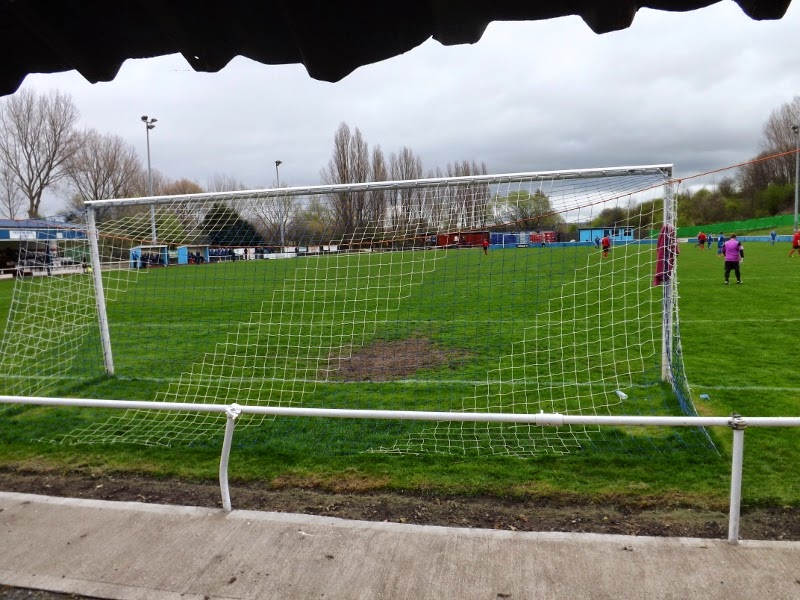 Davison goes off for forward Stephen Young,  Shaun Heads switching to left-back as McLoughlin tries to counter a strong Thornaby opening to the half.  "We're winning nowt, man.  We've got to start winning something," screams Andy Hunter.  The home side tire, Michael Duff clinging on with Roofing's 27-goal striker Andy Appelby poised for the rebound; a Nicholson cross is deflected into Duff's arms and then Danny Carson clears upfield, Appleby draws the goalkeeper and lifts the ball high into the net.  Roofing keep pushing, Young missing a glorious chance to kill the game before an Anth Myers pass is cut out, Thornaby break through tackles and Ged Livingston levels the scores.  In a frantic last few minutes, the reinvigorated home side have a penalty appeal turned away, the referee exiting to shouts of "Absolute rubbish" as a disconsolate Roofing walk silently off.  "It's still there for us," McLoughlin says, but with Seaham beating Ryton those three wins seem just a bit further away.