They hadn't seen so many foreigners in Heddon since Emperor Hadrian's legions stuck up Milecastle 12.  It was February 2001 and the foot and mouth outbreak - which had spread across Britain to Germany, Ireland, France and the Netherlands - had been traced back to a pig unit by the A69. Cue exclusion zones and import bans, almost four million animals slaughtered and £9 billion in costs.  "People kept away...on meeting people who found out you were from the Heddon area, you were sometimes treated with suspicion," runs one eyewitness account on the village website.

The village football club was born the year after with the merger and acquisition between Northern Alliance teams Proctor & Gamble and Heddon Institute. The players made news of their own with a First Division title and six seasons in the Alliance top-flight, finishing as high as fourth in a division that included current Northern Leaguers Alnwick Town, Heaton Stannington and Celtic Nation (née Gillford Park) before going down with Newcastle University in May 2010.  Denied promotion when their ground failed the grading requirements, the Tyne Valley club moved back to Bullocksteads - variously used by Newcastle Gosforth Rugby Club, the University of Northumbria, Newcastle United Women's Reserves and Tyneside Irish FC - but lost one manager to neighbours Ryton and Crawcrook, a second to work commitments and their first five games of the season by an aggregate score of twenty-six goals to six.  When only half a team turned up for a game with Ponteland United the club decided to call it a day.  Salvation came from Cowgate Juniors, Billy Finlay providing a decade of experience, a crop of young players and a 4-3 win from 3-0 down to local rivals Hexham in his opening game in charge.  "It's been a torrid time but things can only get better," secretary John Shaxon told the Hexham Courant. 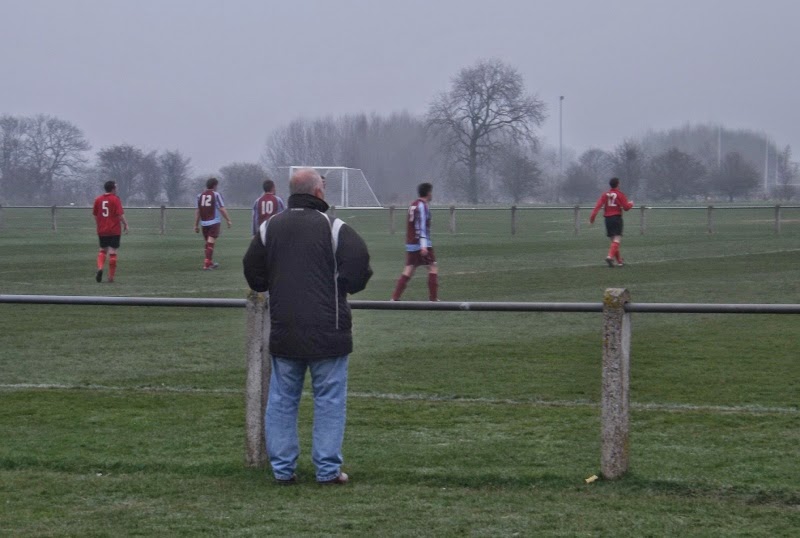 Six months and 19 matches later, Heddon enter today's game against promotion chasing Newcastle Chemfica (Ind) having won three of their last four but with only Willington Quay Saints below them in the league.   The visitors, probably the only team in the entire pyramid whose name resembles a losing candidate in a local election, have already beaten Finlay's side this season but had been wobbling like Ed Miliband's poll ratings before last week's 4-0 home win over Wooler. "Don't let them bully you...it's a nice pitch so keep it on the deck first and then get behind them," the Chemfica trainer tells his starting eleven.  "You're not in any rush."

The pitch is railed off with metal dugouts, one part of a Univeristy of Northumbria-managed complex in the open space between Woolsington Village and the Kingston Park rugby ground.  Chemfica draw patterns but the home side go closest with a looper that the goalkeeper turns against the bar.  A few minutes of Heddon pressure later ends in a cross taking out everyone except Frank Storey, a lone forward of Stakhanovite workrate and Desperate Dan build, who nods in to the empty net.  "Hold", "Squeeze out halfway", "Push", "Start again" and "Don't foul," exhorts the beaten Chemfica keeper, though a passerbymight wonder if he's marshalling his defence or toilet training a pet dog.  A defender's head preserves Heddon's lead before a free kick evades two attackers and the goalkeeper's dive, dropping into the far corner to square the game.  Tempers flare, two players challenge for a ball and a Chemfica striker drops to the ground.  "Absolute disgrace.  It's supposed to be a football game,"  Chemfica boss Nigel Reeves shouts.  "Not as bad as he made out.  He caught him, like.  Elbow," a Heddon official reckons.  "It's wrang," says a spectator. There's thirty seconds' silence and then a yellow card. "Lucky," a Heddon fan tells me.  "Very lucky."

After a six-minute break we're into the second half.  A three-man, one-touch passing move nudges Chemfica ahead, an individual goal from the Spaniard Dan Sherliker makes it three, and a tap-in after a defender miskicks the ball puts the visitors 4-1 up with just  over an hour played.  The home side never give up, sneaking a goal back and seeing their keeper impressively deny both Sherliker and the tireless Dieu Lomana, but with only four games remaining Finlay's team are still three points short of beating the drop.