The streets of Montevideo were unusually quiet on the afternoon of July 30th 1930.  An official attendance of 93,000 was recorded inside the city's Estadio Centenario for the first World Cup final, although the stadium was already full two hours before kick off and thousands more travelling supporters either arrived late or missed the game altogether due to fog and congestion at the port. 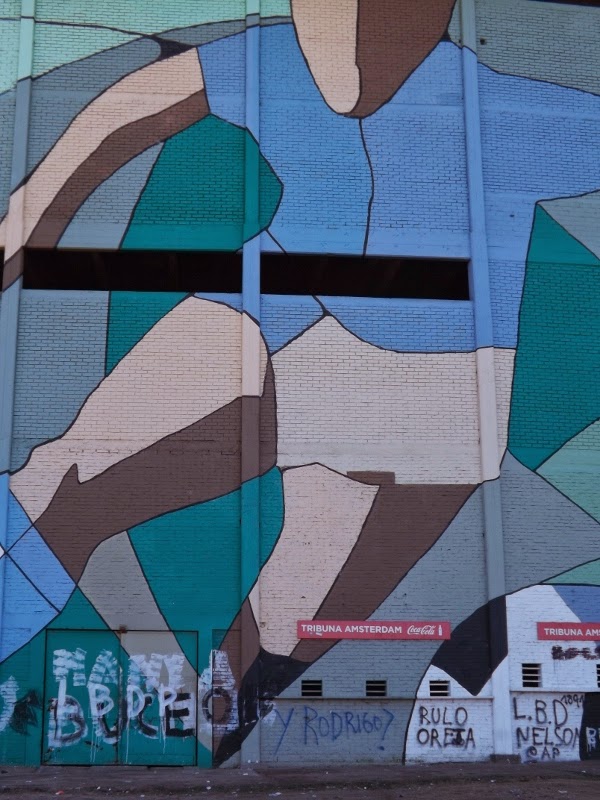 The Centenario - the name a nod to the hundred years since Uruguay's first constitution - had been purpose built for the tournament in nine months, it's rain-delayed opening meaning eight of the competition's eighteen fixtures - and all of the opening three - were played at the nearby Parque Central, home of Nacional, and Penarol's Estadio Pocitos, which was demolished a decade later.   Built on old grazing land and designed by Juan Antonio Scasso, two of the Centenario's tribunes, Amsterdam and Columbes, were named after the cities where Uruguay's footballers had earned Olympic gold medals in 1924 and 1928.  Thirteen countries had agreed to take part in FIFA's new competition, three of the four European entrants - Belgium, Romania and France - travelling for a fortnight on the same ship, picking up the Brazil team on the way, and welcomed by 10,000 Uruguyans when they finally arrived.  In the absence of rivals England, Italy, the Netherlands and Spain,  Uruguay and neighbours Argentina - beaten finalists after a replay in the 1928 Olympics - were favourites to lift the Goddess of Victory trophy. 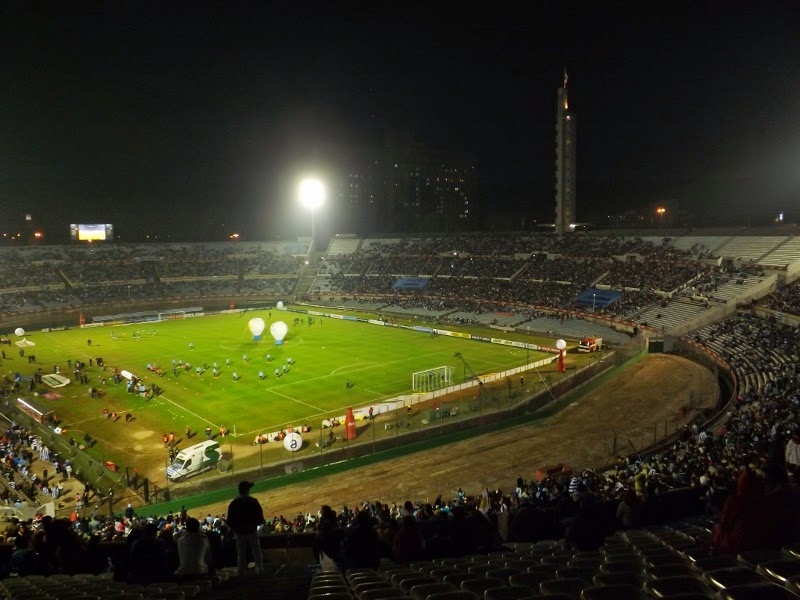 And now here they both were in the final itself, the Argentineans departing Buenos Aires to cries of 'Victory or Death!'  Pablo Dorado put the hosts ahead, Carlos Peucelle and Guillermo Stabile reversing the advantage before half time.  Uruguay, thought a local newspaper, "suffered a thousand deaths" before Pedro Cea's 57th minute equaliser. Santos Iriarte smashed in from 25 yards nine minutes later, and Hector Castro - left with only one hand after a childhood accident with an electric saw - headed a fourth from Dorado's cross.  Back in Buenos Aires women carrying Uruguayan flags were stoned and the country's consulate was attacked, mounted police discharging revolvers as they fought to drive the protesters back. 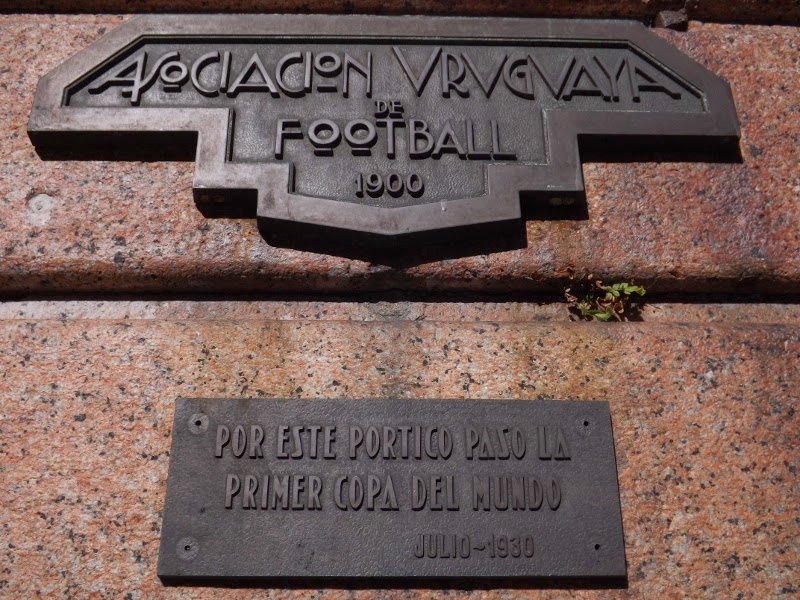 Tonight's game promised to be a more sedate affair, Northern Ireland the visitors in a friendly arranged as one of two World Cup warm-up matches before La Celeste sets off for Brazil.  The Centenario's elliptical stands are almost full, its famous 98-metre Art Deco tower glittering under floodlights.  Despite showing signs of its age - open to the elements, the bucket seats are dirt-spattered, cracked or ripped out entirely leaving many in the crowd sitting on stone steps while the executive boxes are more reminiscent of Kenilworth Road than Wembley - the stadium oozes character and scale, the view from the back of the Tribuna Amsterdam soliciting a genuine "Wow" as I make it to the top of the steps. From the back wall - so low you can bend at the waist and hang over the top of the stadium - thousands are still snaking across the dirt ground waiting to get inside. 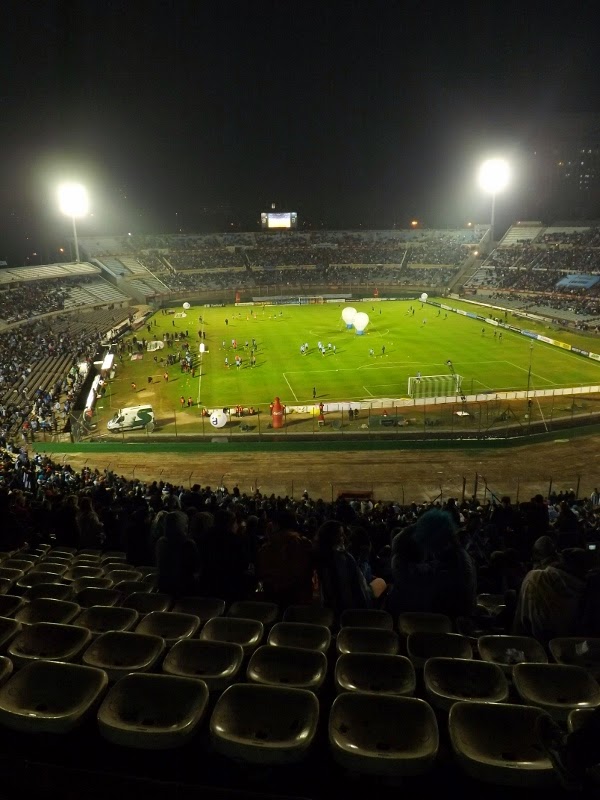 Drums rat-a-tat, trumpets flourish and a dance band sambas in a corner, the colours reflected in a moat separating the supporters from the pitch.  The crowd respectfully claps the end of God Save the Queen, playfully whistles the scoreboard display of the visiting side then roars expectantly as Diego Forlan and Edinson Cavani get proceedings underway.  The pitch, slicked by a few hours' drizzle, suits Uruguay's fast interplay but the Irish dig in and press the halfway line, restricting space and heralding the first attempts at a Mexican wave a mere 15 minutes into the game.  The only noise - abuse for the referee excepted - comes from vendors touting churros, crisps and Coca Cola.

Uruguay - unofficial world champions since defeating old rivals Argentina in October -
finally rouse the crowd on half an hour, Cavani and then Forlan drawing a stunning double stop from Roy Carroll, who ends up clattering a post while turning the second shot away for a corner. Forlan's replaced at the end of an underwhelming forty-five minutes, Espanyol's Christian Stuani the replacement as Oscar Tabarez tries out alternatives to the injured Luis Suarez.  It's the substitute who finally breaks the deadlock, Cristian Rodriguez's slaloming run opening up space for Cavani, whose dinked pass finds Stuani in front of goal.  "Uruguay, Uruguay," the Amsterdam belts out.  It's a sound, form, luck and Luis Suarez's fitness permitting, which might yet rumble all the way across Brazil. 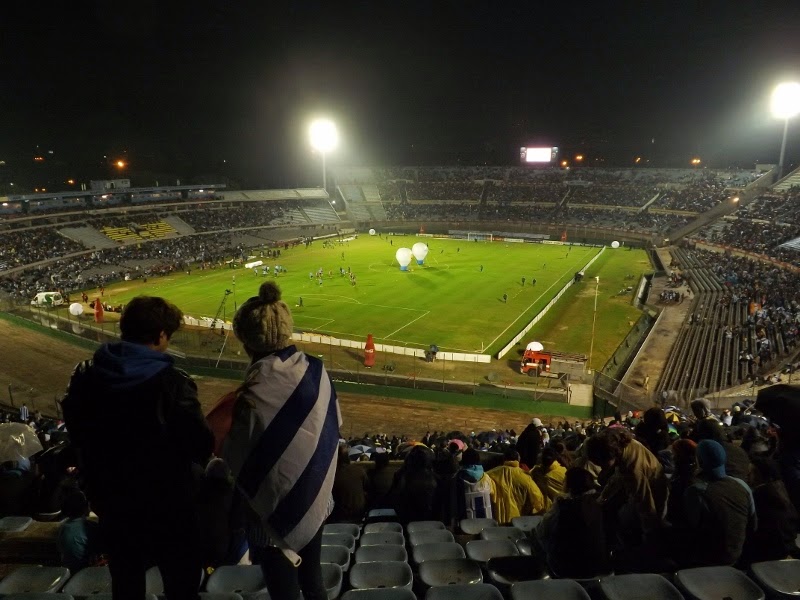 Anticipation is bubbling on the streets of Montevideo, with national flags replacing election posters in shop windows on the Avenida 18 de Julio.  "People are massively excited," UK ambassador Ben Lyster-Binns tells me.  "There's a huge amount of affection for English football here, especially with Suarez doing so well at Liverpool.  The dream scenario is that we both go through, though if England win nobody will want to speak to me for at least a week."  "There are many obstacles in our way," captain Diego Lugano had told a pre-match press conference, "but nothing can take away our dreams."