On the weekend that Gamba Osaka knocked Urawa Reds off the top of J1 with just one game of the season left to go, Diego Forlan was relegated with Cerezo, and Toto Schillaci's old club Jubilo Iwata lost their J2 promotion play-off semi-final with Montedio Yamagata, the capital city's non-league football teams kept rolling on.  Ome FC and HBO Tokyo met on a training pitch at Urawa's stadium to decide the winners of the Tokyo Senior League Division Two Cup,  FC Shinjuku, Griffin and Nomura Research Institute all played league fixtures, and Nankatsu SC were at home to Marubeni Corporation in a cup semi-final.  On the other side of Tokyo Bay, the group stage qualifiers in the Kanto Soccer League's Ichihara Cup were decided in two rounds of games held just 24 hours apart. 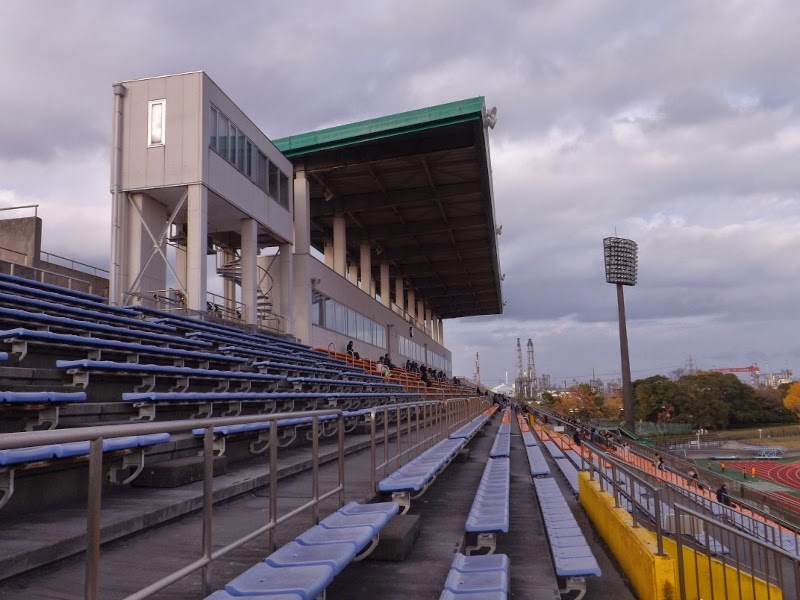 Contested between 20 clubs over 37 games, six days and a month and a half of competition, the final prize of the 2013 KSL season was finally decided 5-4 on penalty kicks, Urayasu SC - second division champions with seventeen wins and a draw - edging out top-flight Tokyo 23 FC after a 3-3 tie in normal time. After strolling to the Division One title with just a single league defeat all year, Urayasu are back to defend their trophy, grouped together with Vonds Ichihara, Tokio Marine & Nichido Fire Insurance and MSDF Atsugi Marcus, club side of the Japanese Navy. 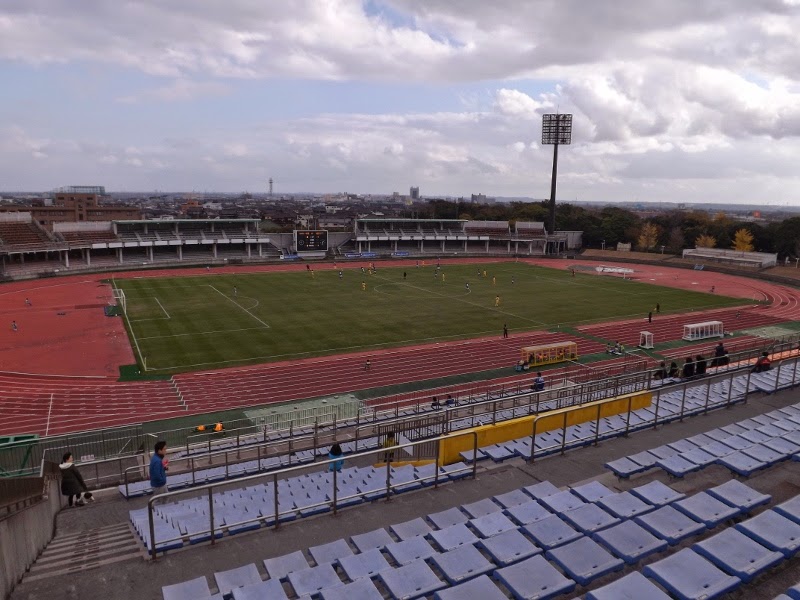 Four trains, a half hour walk and 20 minutes in the company of a man with 'If I tell you I have to kill you'  written in capital letters across the back of his jacket after exiting my front door, I arrive at a sunny Ichihara Seaside Stadium, where the views, disappointingly, are more Billingham-on-Tees than beachfront chic. Homeground of J.League pioneers JEF United from 1983 until they relocated three stops north on the JR Uchibo Line to the Fukuda Denshi Arena in 2005, the two-sided stadium's now used by Vonds - their name a fairly unlikely portmanteau of victory and bonds - who, after finishing a distant second and then third behind Urayasu in their last two league campaigns, have finally got in front of their fellow Chiba-ites, a pair of goals better off after the opening two group matches. 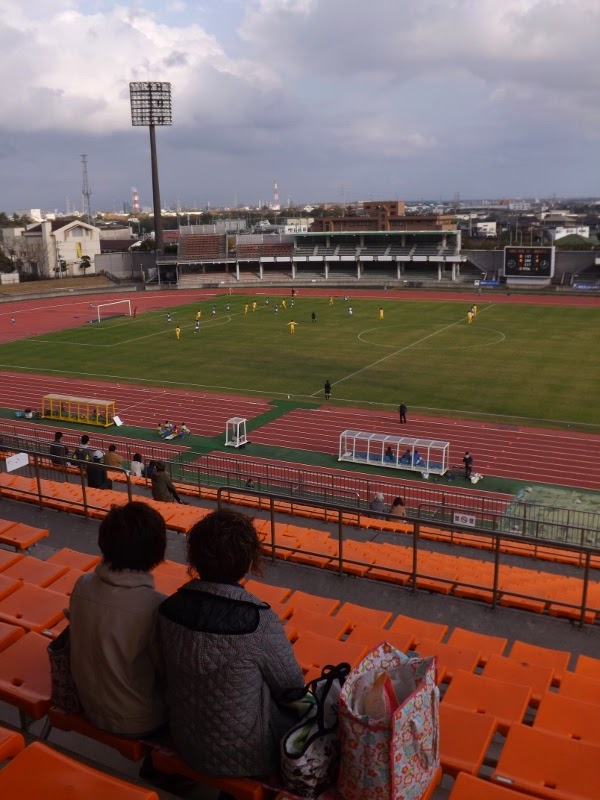 Needing the win, Urayasu attack first, ex-Tokyo Verdy striker Koki Takenaka leisurely cutting inside a dangling leg then sweeping the ball past the keeper's left hand.  "Wooah-ooah Urayasu," chant the four visiting supporters.  The man handing out Vonds merchandise sits impassively, a poster curled in his hand.  Urayasu press high, Vonds kick higher:  a shot flies over the bar, a free-kick hits the top of a stanchion and a lofted cross is redirected weakly into the goalkeeper's hands.  The blues are more composed but come no closer to scoring again themselves, the first half perfectly encapsulated when a player takes only three touches to control, shimmy clear of two defenders and then pass the ball out for a throw. 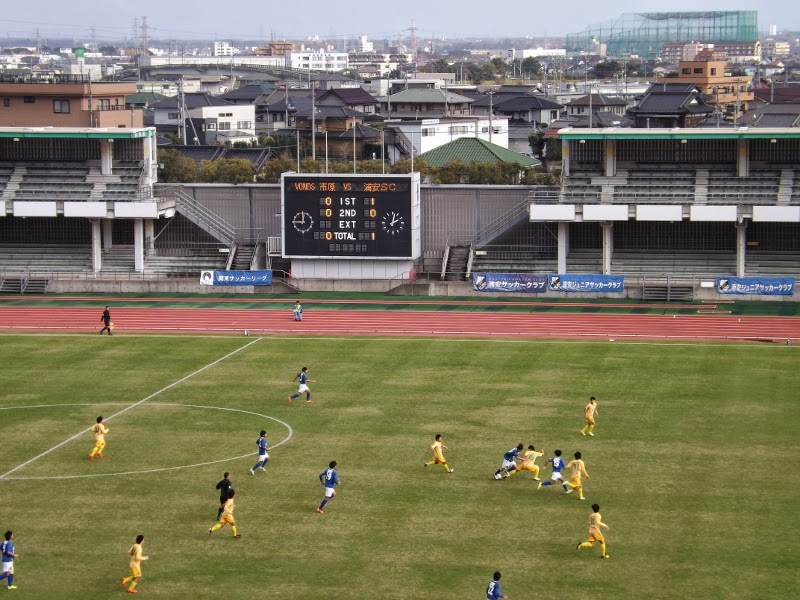 I move to join up with the Vonds hardcore for the second period, bang in the midst of green tartan blankets, thundersticks and tupperware containers, then shift once again to an empty expanse of orange and blue seats where two middle-aged women are echoing Urayasu chants in whispers while divvying up the contents of an Eiffel Tower picnic bag.  The home side huff, puff and almost score when a backpass lands at a forward's feet but the blues kill the game with ten minutes remaining, a free kick looping off a head, over the goalkeeper and just under the crossbar.  The travelling support bang their drum and roll their hands in the air.  Knocked off the top of the group, the home side still go through to the quarter finals as one of the three best runners-up. 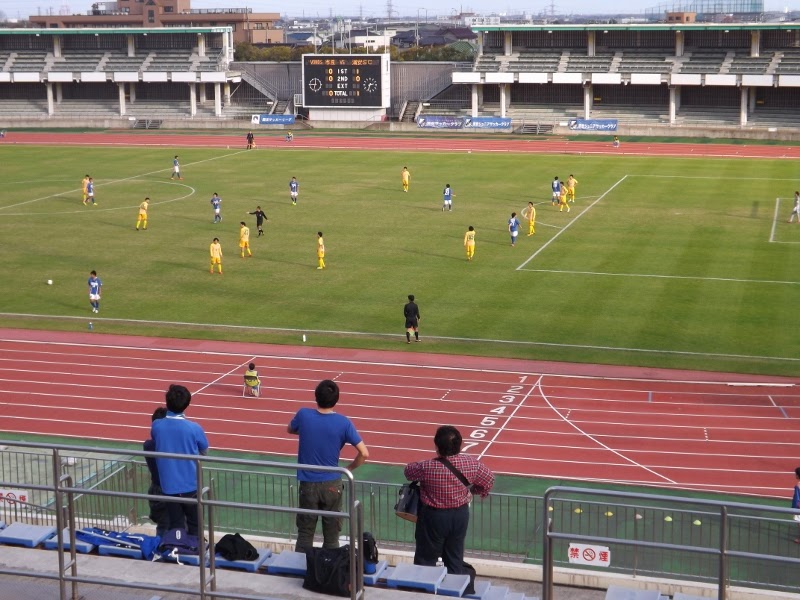 Heading back to Tokyo I end up next to an elderly, bespectacled Japanese man who's chosen to dress in snakeskin boots, blue jeans, a stetson, black leather waistcoat and Texas pin badge. Across the aisle, someone at least two decades younger is attempting to pull off a look which daringly combines 60p plastic porch sandals, a beach bag and a Christmas tinsel wreath hooked over a suitcase.  We all change at Funabashi, where Japan's wild east meets a Hans Christian Andersen Park,  Colonel Sanders in Santa outfits and a seven-storey 100 yen store, while the train speeds on towards Kurihama,  the port where Commodore Perry, laden with gifts including "a working model of a steam locomotive, a telescope, a telegraph wire and variety of wines and liquors",  first opened the long-secluded nation up to western consumer goods and helped make a Chiba cowboy's dreams come true.