There can't be many 11th-tier football teams who've had a book written about them, but then Percy Main Amateurs are anything but an ordinary side.  "A wonderful club," wrote Ian Cusack in his account of their triumphant 2009-10 season, when the claret-and-blues won both promotion and a Combination Cup.  Re-established by demobbed soldiers in 1919, the village team's pitch formed the middle of the oblong of pitmen's cottages where Jackie Rutherford, son of a coal trimmer and schoolboy football prodigy,  had been born three decades previously.  Spotted in the Northern Alliance, the 'Newcastle Flier' became the St James' Park club's youngest ever player, scoring on his First Division debut against Bolton Wanderers aged 17 years and 139 days.  At 19 he was capped by England; before he turned 30 he'd won three championships, played in five FA Cup Finals, fallen out with the directors over benefit payments and been sold on to Second Division Arsenal for £800.  The Highbury board hoped to get two or three seasons out of Rutherford; they got 13, the winger still holding the record as the oldest player to represent the club despite recent appearances to the contrary at the centre of their defence.  Rutherford's son and two of his 11 siblings also played professional football with Arsenal, Portsmouth and Newcastle United.  In 2012, his great-grandson (a Manchester United fan, naturally) won Olympic gold in the long jump. 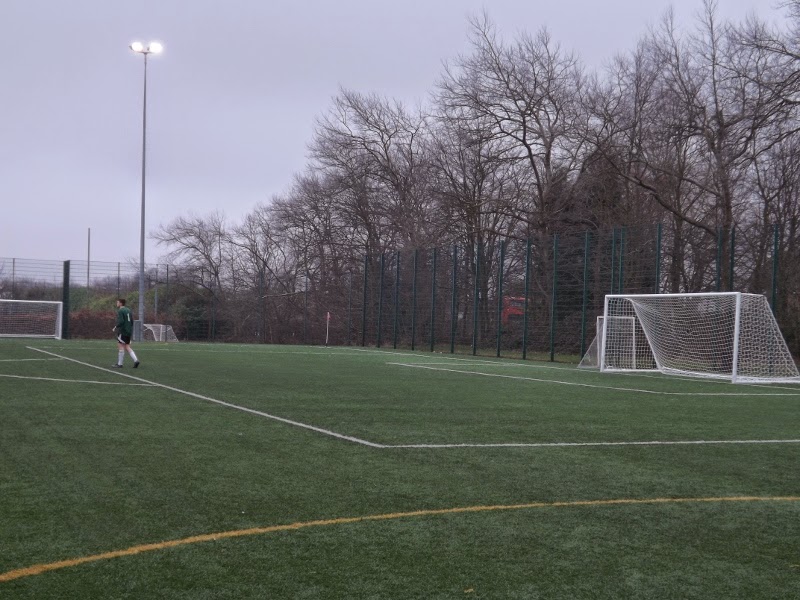 Former club of Jack Colback's brother - "the most intelligent, incisive and lethal finisher in the division," wrote Cusack -  these days Rutherford's hometown side are the biggest attraction in the middle-tier of the Alliance, a league where games are always enthusiastically contested,  usually free to watch and habitually only thinly populated by substitutes, injured players, relatives, members of the committee and men out walking their dogs. Unbeaten in the Nike First Division since the third weekend of November, Percy Main are 17 points clear of a trailing pack which includes the likes of AFC Newbiggin, Gosforth Bohemians and Wallsend Boys Club, amassing 64 goals in a mere 19 games. Eight of those were netted at home to Newcastle University - "a student club run by students," if that wasn't already clear from the name - when the visitors were thoroughly schooled in mid-September. 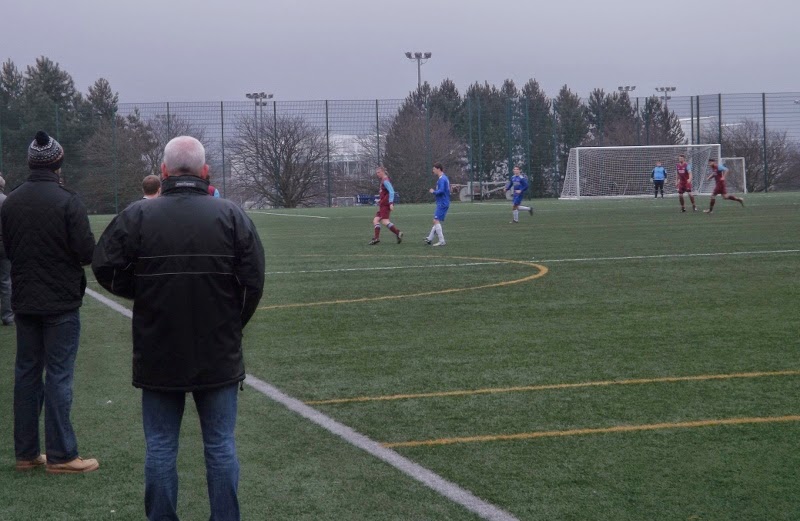 Last time I watched the scholars in action they were playing on a muddy pitch at Cochrane Park and I was forking over the best part of £5,000 to do an MA.  We've both moved on, though the undergrads only as far as a 3G pitch in Longbenton, where I once played spectacularly badly in a Thursday evening kickabout with the School of Education, Communication and Language Sciences. With the increasingly wretched Metro service back at stage one of its modernise-breakdown-repair cycle, the nearest station which doesn't require me to switch to a bus is at Walkergate, twenty-minutes and the length of Coach Lane (or, in the geographical parlance of the Northern League, from Newcastle Benfield to West Allotment Celtic, with a turn off for Team Northumbria) away. The leaders haven't dropped a point in seven games, the students have picked up four wins out of five. As is so often the case with Tyne & Wear's transport infrastructure, you get the distinct impression that something is about to give. 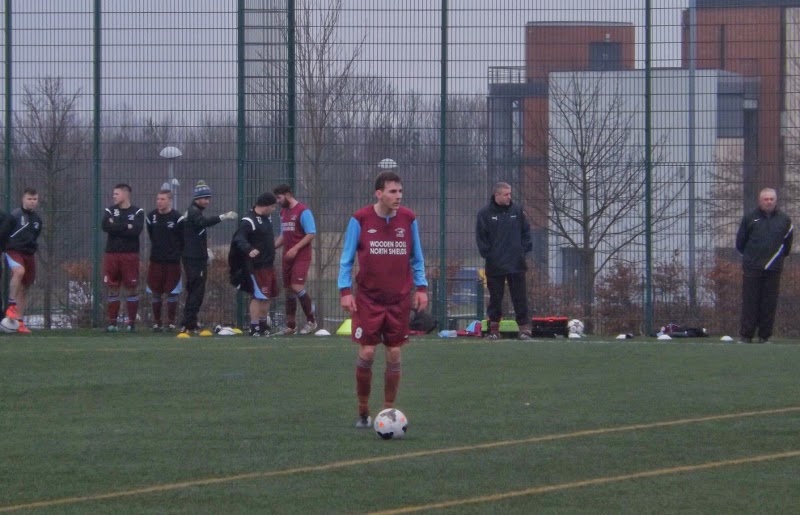 One side presses, the other passes, both trying their best to keep things moving on the ground. "Close in, plenty of talk, first and second," Percy Main's goalkeeper cajoles.  "Wake up!" comes a shout from the adjoining pitch, where a game of hockey is underway.  "Runners," scream the footballers.  "Too much space," say the men with sticks.  The students score first, number 9 clanking in off the post at the second attempt, though the crosser looks suspiciously offside.  Percy Main level with a shot that curls over the goalkeeper's head, but the pink-booted number 9 first shimmies and smacks in a second, then turns a defender and whacks the ball into the top of the net.  The University's Greek right-winger is roughly hacked to the artificial turf then clatters the bar as the game, evenly matched in the first forty-five minutes, takes a decisive swing from claret to navy blue.  "We don't stop, big last five," yells Percy Main's manager Richard Nugent, once of Cullercoats, Lindisfarne and New York.  By the time he's finished his sentence, the students are celebrating their fourth. 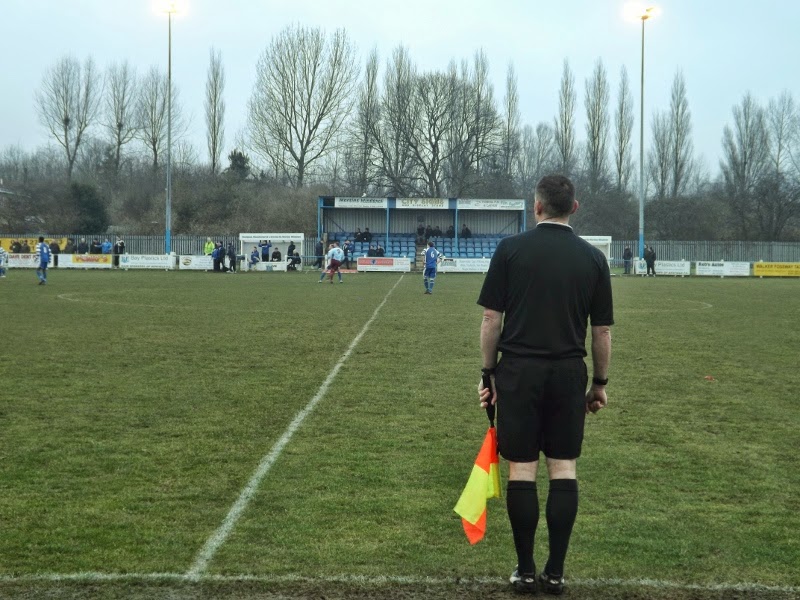 Back down Coach Lane on the final whistle, I catch up with Ian Cusack, Harry Pearson and assorted members of the Popular Side fanzine litterati at the second-half of Benfield's game with Jarrow Roofing.  The visitors have travelled with a Scottish Under-21 international and a debutant Italian previously of Roma, Brescia and the Azzuri U19s, but are already down to nine men with one off for "a hard tackle" and another for some pushing and shoving in the aftermath.  The referee preens, Benfield win 3-0, and Roofing are left to check footage on a video camera while eating curry and chips in the clubhouse after the game.  "I bet the bugger sent himself a card this morning," says a spectator, shaking his head as the officials depart.