Going down two divisions in the year their club turned 100 didn't stop Aris Thessaloniki from throwing a party.  A giant yellow-and-black banner was draped from the top of the Byzantine White Tower and more than a thousand red flares set the night sky aglow as supporters paraded noisily around the streets of the city. Majority owners of the club, Aris' avowedly left-wing fanbase is famed for the frenzied, unrelenting backing it gives to a side which last won the national championship in 1946 and has no major honours since the 1970 Greek Cup.  "Are these the best fans in Europe?" asked EFW's Danny Last after Manchester City's visit in the 2010-11 Europa League. "There can't be a single football fan that has come away from watching a game at Aris, either on television or in the flesh, and not talked about their support." Those foundations are absolutely vital.  After finishing fourteen points adrift at the foot of the Greek Super League, the cash-crunched club followed AEK Athens in relinquishing professional status and starting over in the third-tier Football League Two, their supporters successfully agitating against an investment offer from a Canadian mining company accused of causing environmental damage to the nearby Halkidiki peninsula.  "We have difficult moments," one member of the Super3 fans' group says, "but we are still proud and determined to make the club strong again as it always used to be." 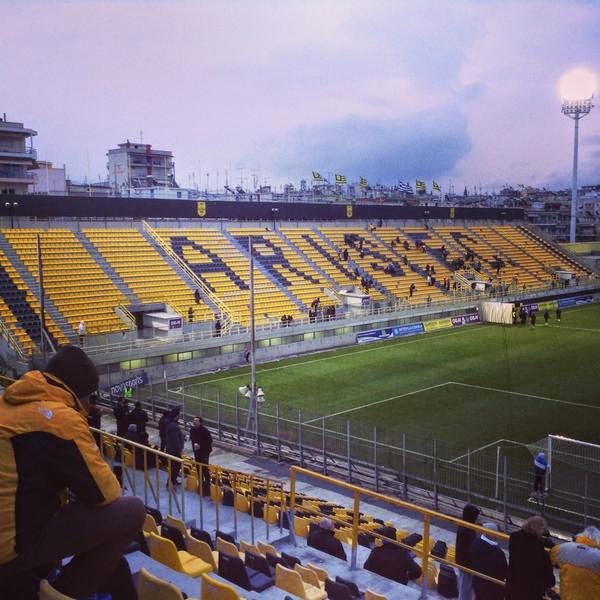 Thessaloniki is a walkable city, wedged against the sea and within striking distance of Skopje, Sofia, Tirana, Mount Athos, Athens and Istanbul.  Just as importantly for the football tourist its fixtures are spread right across the weekend, Iraklis 1908 first up on Friday evening, Apollon Kalamarias and Aris kicking off at Monday teatime, and PAOK, Agrotikos Asteras and Iraklis Ampelokipoi all in action at various points of Sunday afternoon. Simultaneous kick-offs and easyJet's arrival times mean I'm limited to three of the six games, a bum steer from Soccerway leaving me with a choice of two by the time third-placed Aris get underway against Kampaniakos Chalastras, a day and a bit after it was originally scheduled to take place. 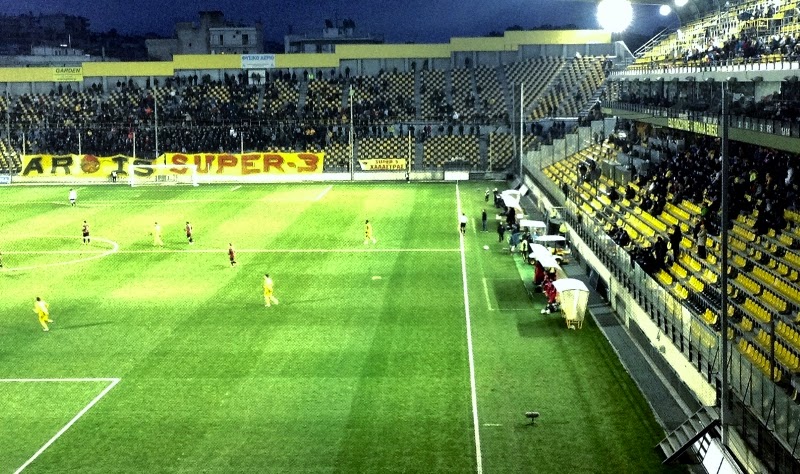 You can stroll the four kilometres from the city centre to the Kleanthis Vikelidis and bag a three-for-one by calling in to Iraklis (where Revie's Leeds United were cheated out of the 1973 European Cup Winners' Cup) and PAOK's Toumba Stadium on the way, or €2 gets you there and back on the number 10 bus, the stop a few steps from the cramped stadium front and its shuttered doorways for a wrestling club, mobile phone shop and the does-exactly-what-it-says-on-the-entrance Beer FC 1914.  A gap-toothed man hawks tea from a metal urn on wheels, while a few other street vendors try to offload yellow-and-black scarves and slabs of polystyrene, one to cover your neck, the other - with three and a half of the four sides completely open to the elements - to comfort your behind. 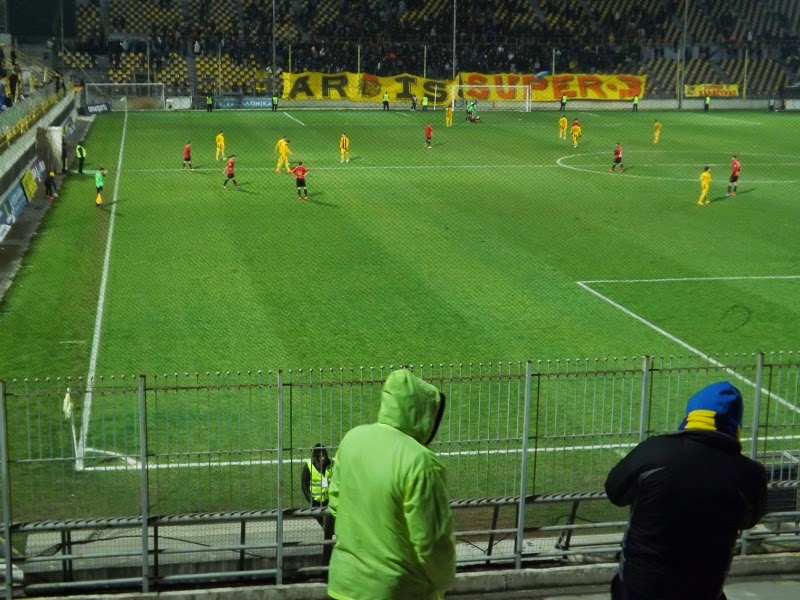 None of the four are anywhere near full, a snowy afternoon, the late rescheduling of the game and the club's recent tribulations keeping the attendance to a smattering down the sides and several hundred at the back of each goal.  There's silence until the teams enter, then a red flare is whirled around above a long Aris Super 3 banner, hooded fans clamber up fences, and drums and voices belt out a somnambulistic beat that rises to a hail of boos whenever a Kampaniakos player touches the ball and ratchets up with each slow-moving Aris attack. The fans provide all the early entertainment with several minutes' bouncing and a rumbling chant that repeatedly crescendos in a strident, stress-on-the-second-syllable "Aris!"  The first goal gets another flare, two bangers and a few extra decibels. "Bravo," says the bloke next to me, his eyes a pair of slits between a Napapijri hood and the lower half of a balaclava. "Bravo." 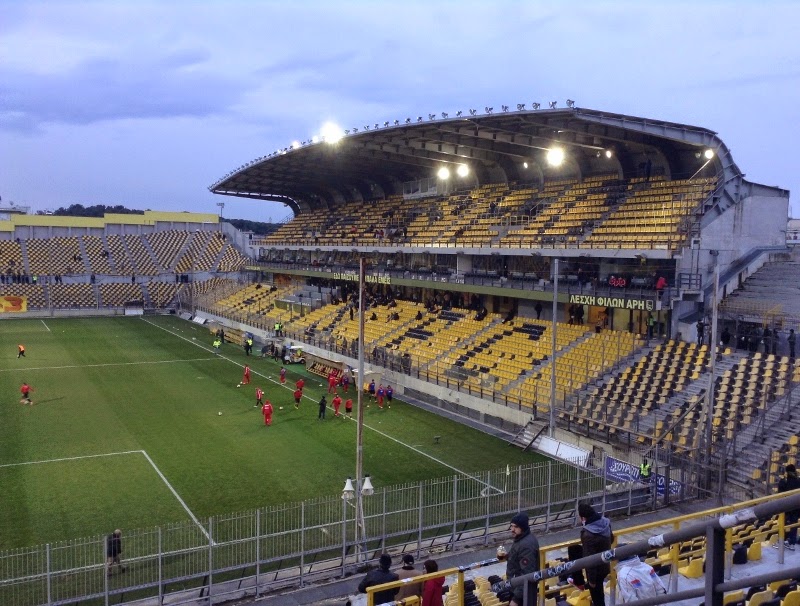 Things go quieter in the second half.  Aris keep giving the ball away, Kampaniakos keep giving it back. I try standing on a seat and shuffling from side to side like a crooner at a working men's club to maintain circulation in my feet, while the Super 3 get their lungs working and a linesman is thoroughly doused in a liquid I hope is just water as he flags for offside, enraged fans emptying plastic cups through the perimeter fence as he inches ever closer to the safety of the pitch.  Aris score again, torn yellow paper is flung in the air  and the Super 3 run through their litany of victory chants. "You came at a bad time," says a spectator through clenched teeth and cigarette smoke. "When we are many it is a wonderful place."