The last time I found myself in Sagamihara was by mistake.  An afternoon's hike turned into an eight-hour misadventure, only ending when, dusk and spirits falling, I finally caught sight of the ramshackle Sagamiko Station, the two pages I'd cunningly photocopied from a dog-eared guidebook having proved of surprisingly little use along the way. I didn't know it at the time, but the city's football team had just been established by a far less accidental tourist.  Shigeyoshi Mochizuki,  retired from a playing career that encompassed 15 international appearances and the winning goal in the 2000 Asian Cup, was visiting friends when he called into a shop near Sagamihara Station.  The conversation turned to football. "I'd like to be a coach one day," the ex-Nagoya midfielder admitted. "Why not here?" asked the shopowner. 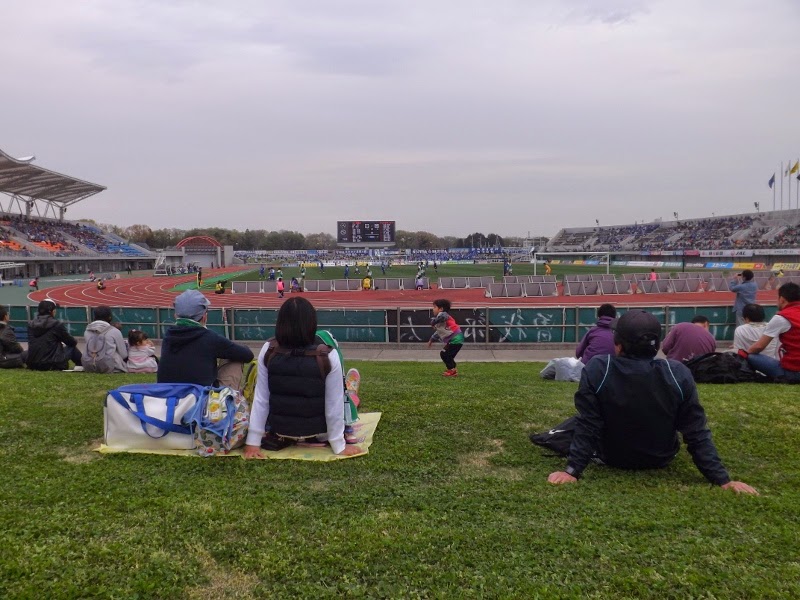 When I passed through the city in 2008, Mochizuki's  newborn club was only nine months old but speedily ascending the Japanese football pyramid.  By 2011 SC Sagamihara had shot through the Kanagawa Prefectural Leagues with three successive promotions and had already been granted associate membership of the J.League; three years later they lined up with 11 other clubs as founder members of J3. "A very proud day," Mochizuki said. 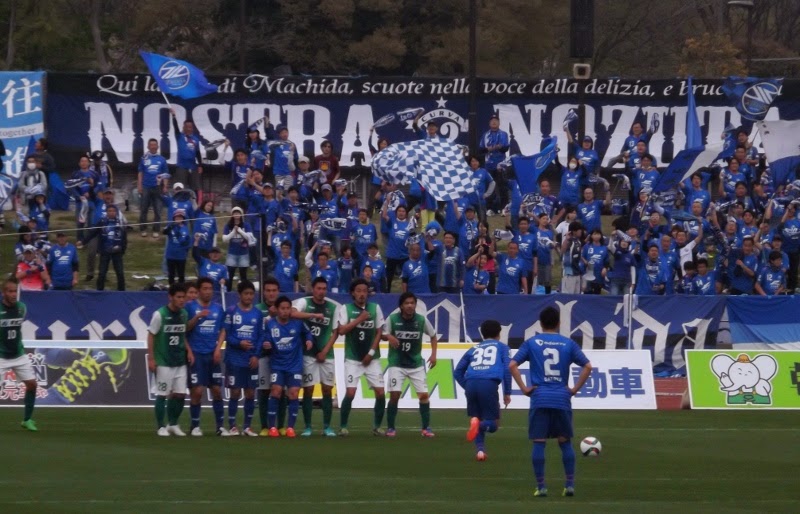 The Tama Derby pitched third against fourth, promotion favourites against play-off hopefuls, Machida Zelvia, formerly coached by Osvaldo Ardiles, travelling to play a team captained by the veteran Naohiro Takahara, once of Boca Juniors and the Bundesliga.  Only a month into the season, it was already being branded "a decisive battle".  Both sides had won three, drawn one and disappointed in a limp defeat at home.  "Sagamihara are better than when we beat them three times last season," warned Machida's Koji Suzuki. "We know they'll be up for the game." 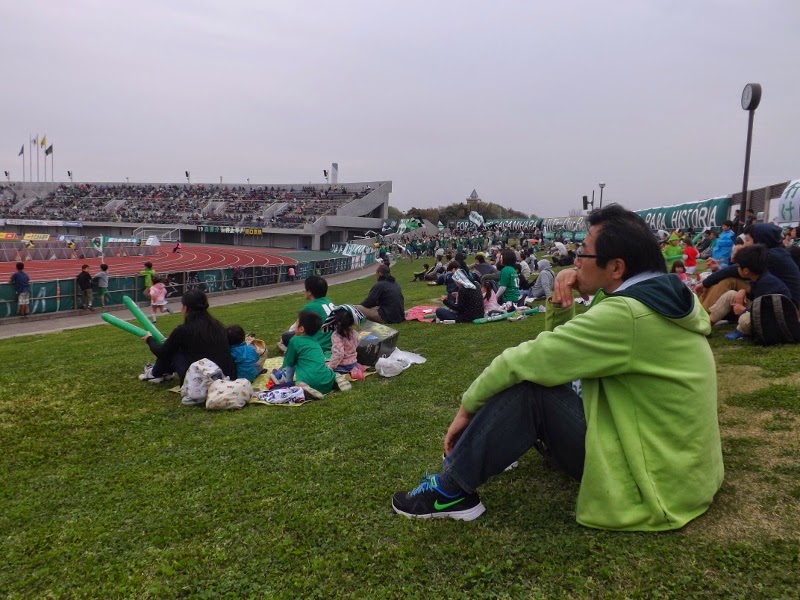 The nearest station to the Gion Stadium is Harataima, two narrow platforms with a mountain view and an honesty box for your tickets upstairs.  I pass two shrivelled rivers, a convenience store and then disappear among the ginko and greening cherry blossom of Sagamihara Municipal Park, the sickly smell of odure from a hundred allotment plots intermingling with the muffled din of stadium announcements and fat drops of rain.   Skirting the longer queues for taco rice, octopus balls and pita hamburgers, I pay just over £3 for roast chicken with paella and just under twice as much for a ticket in the Sagamihara end, which turns out to be a grass bank behind a goal, three rows of advertising hoardings and a running track.  To my right, the home crowd start with Human League, switching to Pigbag as a Machida attack is snuffed out, the ball travels down the pitch and is flighted into the net by Taira Inoue, one of the club's cornucopia of close-season signings from J2 strugglers FC Gifu. There's a moment of utter silence, then thundersticks (doled out for free along a four-page programme) bang, green and white shirts bob on the grass and the theme from Popeye strikes up as  the tannoy belatedly comes to life.  Machida start over, families sit on picnic mats slurping their way through cup noodles and crunching on food they brought in from outside.  Sagamihara's ultras stand behind Gate 12 flags, chanting towards a larger mass of blue at the opposite end of the pitch. 'Pasion Azul' reads a Zelvia banner, the home side responding with 'Forza SC Sagamihara' and 'All Try Our Best'. 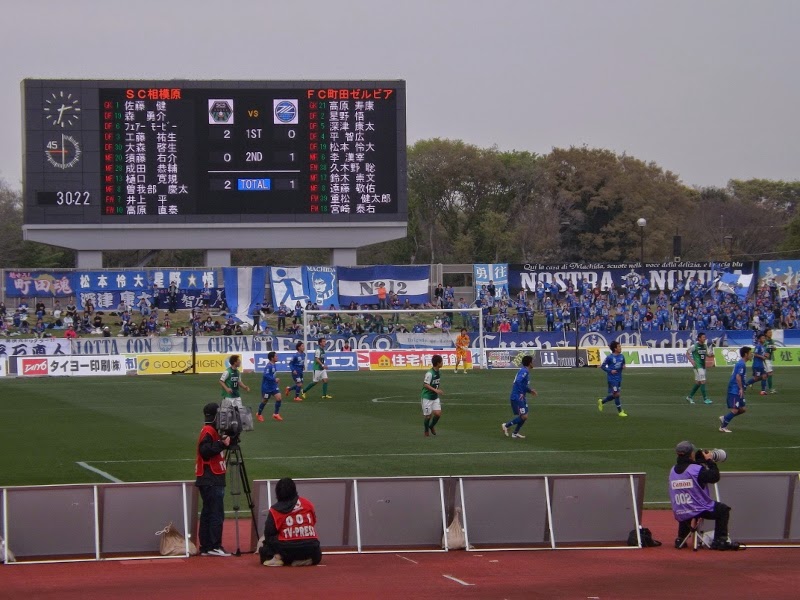 Machida bustle and start bossing midfield; the greens sit and wait, Mobi Fehr, a US youth international once of Portland Timbers and FC Basel U21s, patiently mopping up and Takahara heading clear when Zelvia get closer to goal. Umbrellas go up then back down, children roll across the banking, the ultras twirl their scarves and bounce out No Limit.  A Machida player bangs a shot off an advertising board, the resulting thud his side's most memorable contribution to the opening half hour.  Six minutes before the break Takahara twists and slots a second into the net over the goalkeeper's hand.  There's a scream, Gate 12 pogo for a whole 30 seconds and when they stop the Machida supporters pick up with their chants all the way to the referee's whistle to close the half. 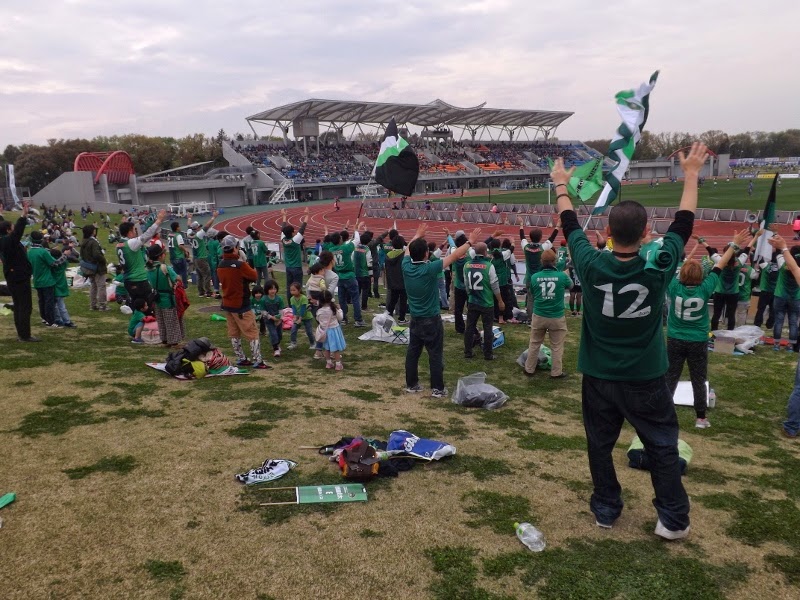 Before three minutes are gone in the second period we've had a save at either end and a Zelvia goal, Satoshi Kukino turning in a rebound off the keeper.  And then, for 40 or so minutes, everything settles back down, bored children racing about while their parents polish off picnics or sit reading books.  The attendance is counted at 4,762, the Gate 12 fans dance to Go West and Sagamihara, harassed, pushed back and reliant on the wiles of Takahara to keep possession upfield, cling to their advantage as the scoreboard shows first four then five minutes of time added on.  The final whistle, when it eventually comes, is met with a roar, the caw, caw, cawing of the crows overhead an early season mockery of Machida's promotion campaign.  Sagamihara go second, a Zelvia fan in a West Ham United t-shirt shaking his head with incomprehension as he starts back out on the way to Harataima. 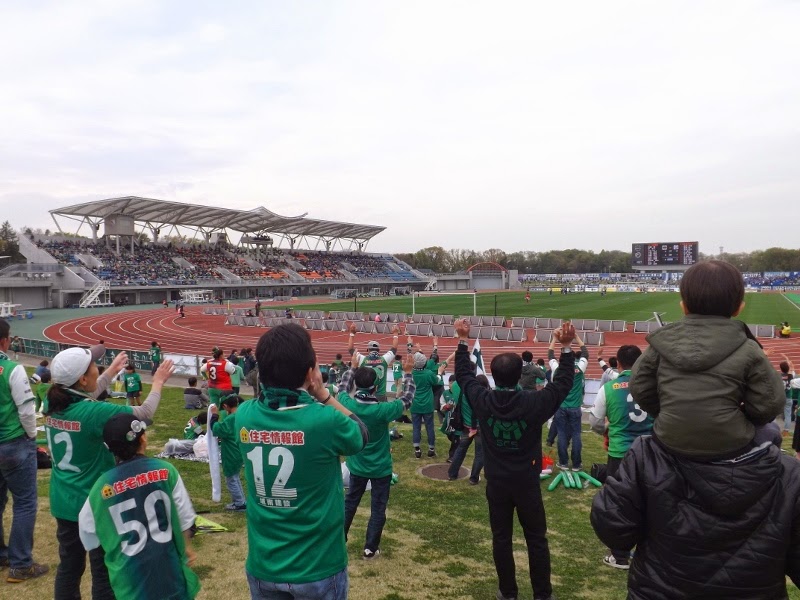