Three and a bit months later, it feels as if I've never been away. A day after landing at Narita and two hours since waking up jetlagged in my Yokohama flat, I'm at Oifuto Central Seaside Park, north of Haneda Airport, east of Shinagawa's aquarium - "Oishi!" ("Delicious!") visitors were exclaiming, pointing upwards at the sealife from the walk-through glass tunnel - and Ohi Racecourse, where nightly, illuminated 'Twinkle Races' and Sunday morning flea markets take place.   An artificial pitch, towering floodlight pylons, around 200 spectators and the final morning of the 2015 Tokyo Society Soccer Championship, played out over 11 days by 60 teams on eight pitches all around the Japanese capital city. 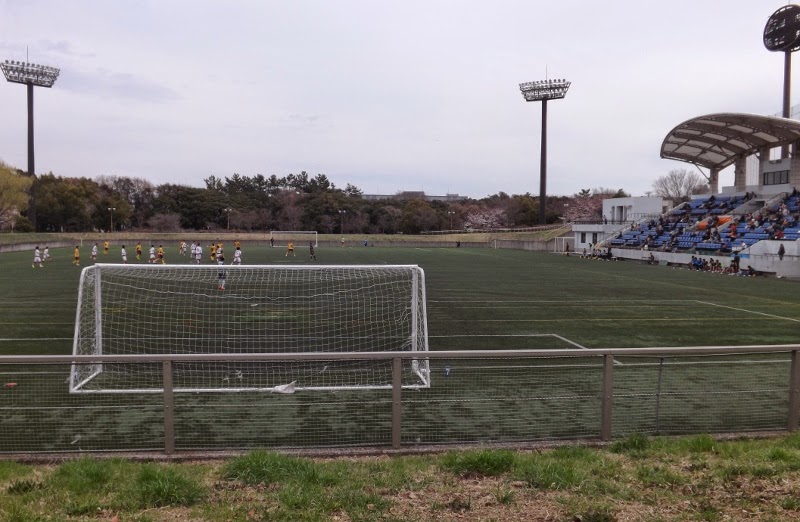 Repeat finalists and current trophy holders Tokyo 23FC are, to quote one afficionado of the Japanese non-league game, "an ambitious, J.League-focused regional league club." Powerhouses of the fifth-tier Kanto Soccer League Division One, where they face off against the likes of VONDS Ichihara, Hitachi Building Systems and Joyful Honda Tsukuba FC, the team is named after the number of municipalities in Tokyo City, have 'Tokyo Pride' as their motto and play their home fixtures a rainbow away from Tokyo Disneyland at the 7,000-capacity Edogawa Stadium, Tokyo Bay.  Their opponents, LB-BRB Tokyo, are not, as you might assume, an inelegant piece of text speak but rather a recent amalgamation of two university football sides that have Kentaro Hayashi, the twice-capped veteran of over 300 appearances for Tokyo Verdy, Kobe and Kofu as sports director and head coach.  While Tokyo 23FC were besting Waseda United in one semi-final, Hayashi's team - who start at the seventh-tier but are shooting for the skies of full J.League membership within the next five years - were putting the finishing touches to a 6-5 penalty shoot-out giantkilling of Kanto Leaguers FC Korea. 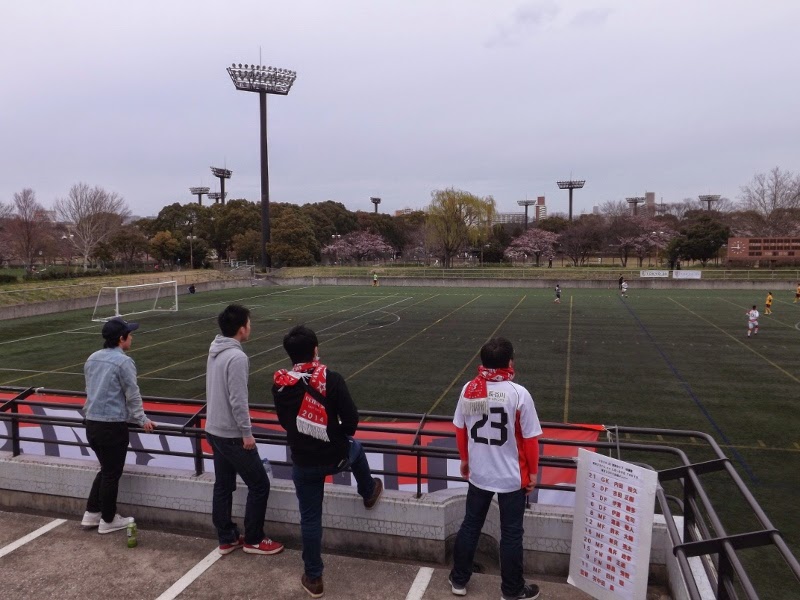 Although capital city bragging rights, silverware and a place in the Tokyo qualifiers of the Emperor's Cup are simultaneously up for grabs, the game progresses at somnambulistic speed, park baseball fixtures and cherry blossom parties in the background as the players stroll about the artificial turf, which is confusingly marked out for hockey, lacrosse and American football too. The single stand is just under half full,  eight Tokyo 23FC ultras and a drum providing the bulk of the noise. I sip my Kirin beer ('Brewed for good times' promises the side of the can) while seven of the ultras chant "Give us goal" and the other greedily demolishes a supermarket bento box with a pair of disposable chopsticks.  A tokyofootball.com cameraman leaves the video running unattended as he scrolls through messages on his phone, looking up just in time to see a 23FC forward punt a dipping volley off the trunk of a tree.  The most entertaining moment of the half comes when a home run clears the walls of two stadiums, rolls off the roof and drops on an empty seat halfway down the stand. "Amazing!" says a spectator, looking at the sky.  Behind him an LBB player does two stepovers and then runs the ball out for a throw. 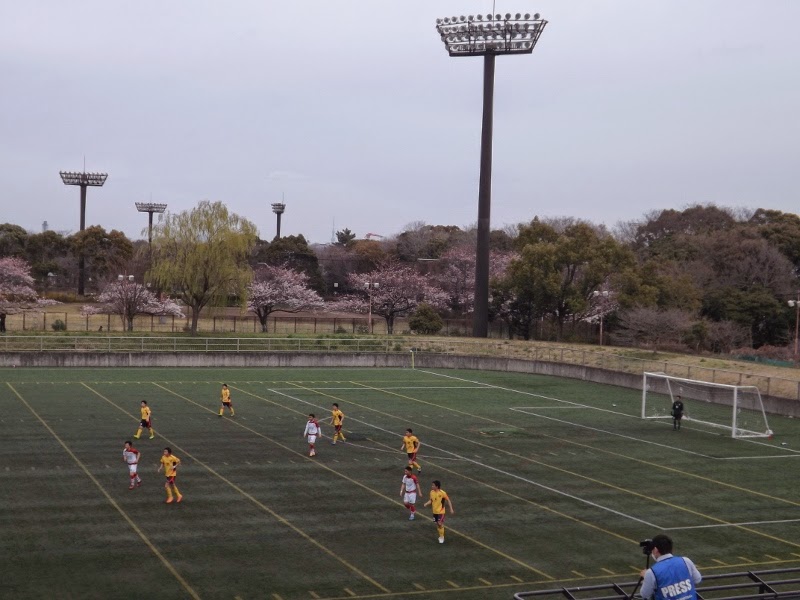 The second half starts unpromisingly and without a hint of a threat on goal until 23FC's Ryota Shingai apologetically places a much delayed free kick straight through the goalkeeper's hands.  A teammate studs wide with no defender in sight and the LBB keeper despairing on his knees, then Singai dinks a shot off a concrete wall with Keita Tsuchiya, once of Bohemians Prague and 1.FC Reimsbach, already off the bench in expectation of a goal.  His keeper has little to do, spectacularly one-handing a header away as LBB finally mount an attack of note.  The holders settle the game with a second goal just before full-time, Daiki Suzuki racing clear as the opposition push desperately upfield.  "Tokyo, Tokyo, Tokyo," the victorious supporters rumble as club officials trade business cards and jet planes dip through the thickening cloud.  The winners collect their trophy,  a defiant LBB fan waving a picnic bag with 'Hug', 'Me' and 'Kiss' written garishly in three hearts as the losing eleven line-up to applaud.  Her shoes have two-inch platforms, 'Cup of tea my doll' printed out in luminous gold on each side.  The last bits of sun disappear, cherry blossom picnickers fold up their mats and head off towards the monorail home.  "Let's go Tokyo," shout the ultras, holding their scarves aloft through the first drops of rain. 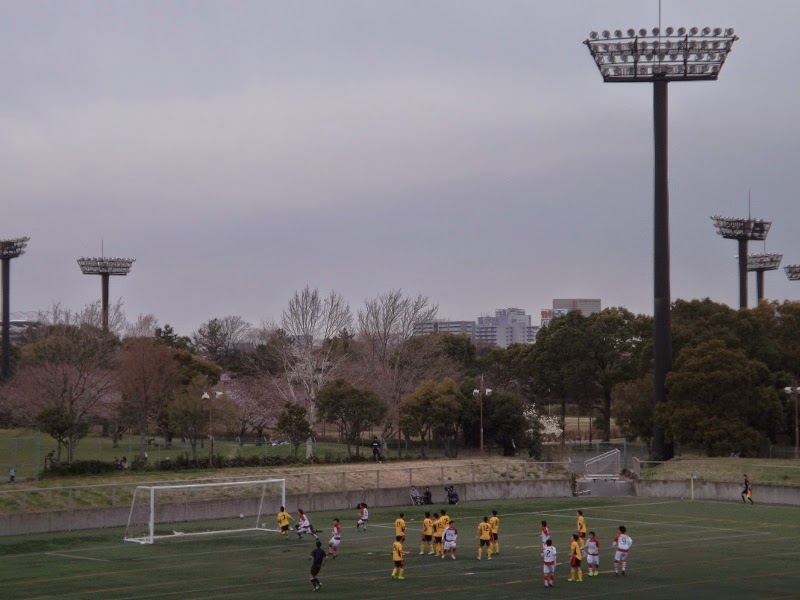