As starts to a new season go, it hasn't been ideal: seven league matches, seven league defeats and a goal difference that's already hit -29.  But Stokesley have been through all this before; in 2011, a year since they'd strolled to the second division championship while winning 14 games in a row, the club lost their manager, two officials and all 38 registered players. "Internal politics," reported the Northern Echo.  "Stability is the aim," Peter Grainge, a fixture at the club since the mid-1960s, told the Middlesbrough Evening Gazette. A whole new squad included Luke Allen, once of York City, and Nathan Porritt, who arrived via Middlesbrough, Chelsea and Belenenses, but a 15-0 hammering at Bedlington in early September was indicative of a forlorn struggle which ended with four points, zero wins and a negative goal difference of 145. "I can't fault their effort," manager Monty Alexander said.  "My head wasn't in the game when I went there and I was overweight," Porritt confided to the local paper, "but I started enjoying football again, getting on with the lads and just having a laugh." 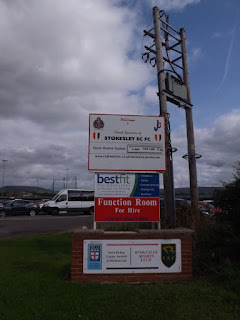 Porritt left for Marske United but Spanish striker  Asenjo Bravo arrived from Atletico Madrid. "He's looking to work his way up to the Championship," assistant manager Chris Lax explained.  Lax briefly replaced Alexander, who then returned as number two to another of his former assistants after just two games. "Internal politics," wrote the Echo, living up to its name. "I've just told the lads to keep their heads up," new manager Nicky Ward told the Evening Gazette.  When Ward resigned in the summer, his eventual successor was Craig Winter, son of the ex-Premier League referee.  He arrived at a club whose budget stretches to win and draw bonuses and petrol money for away games.  "It's a challenge," he said, with more understatement than his dad ever managed. 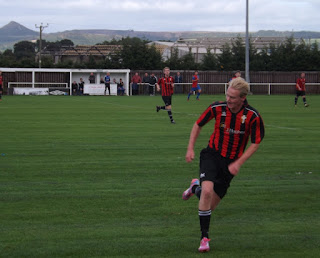 Today's opponents were Tow Law, first club of Chris Waddle and from a town a defeated Mansfield manager once likened to "playing at the North Pole".  Down on the edge of the North York Moors, Broughton Park was thankfully more autumnal than arctic, the chill in the air redolent of the one in my relationship the only other time I'd visited the town.  It was as peaceful as I remembered it: a farmers' market was packing up in the main square; there were signs for the Stokesley Agricultural Society, ducks crossing a river, and the thwack of cricket bat on leather just before I arrived at the ground. 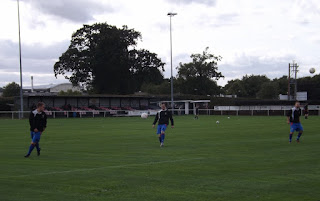 The teams came out through a gate in the fence, Kirsty MacColl playing over the applause of the 40 or so people who were already inside. "Graft for it!" shouted a Stokesley defender, but Tow Law were up within five minutes - the keeper only able to palm a shot backwards into his own net - and could have added another three or four before they'd played ten.  "We've got to get organised 'ere," screamed a voice from midfield.  "Together!" 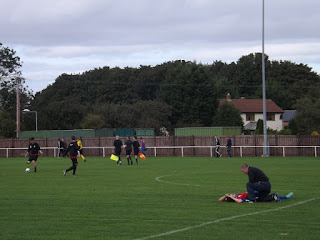 The second goal came after quarter of an hour, the manager dispossessed while trying to play out from defence. "Come on Stokesley, we're flat," someone clapped.  "We go again," announced Tow Law's captain to no-one in particular.  A few away fans were doing a slow lap of the touchline; another kept up a commentary in the monotone imperatives of a man auctioning sheep. "Go back, go back.  Turn.  Behind.  Who wants it?  That's good, that's good."  The home players started stringing passes together but then placed one straight at the feet of a Tow Law forward, who poked in a third at the keeper's near post.  "Piss poor," said the manager.  "It's hard enough as it is without doing that."  It soon got harder, Tow Law's fourth going in by way of the crossbar, a post and two appeals for offside.  "They're not going to come back from this," a spectator said to his mate.   And as hard as Stokesley kept battling, they never did.