After three months getting ready to move to Oman, a protracted break-up unluckily combined with a recruitment process that managed to be even less proficient than Joe Kinnear  during his ill-starred tenure as Newcastle's director of football. The upshot was I took a job in York.  "Less cash but better beer and more grounds to visit," a mate said consolingly. 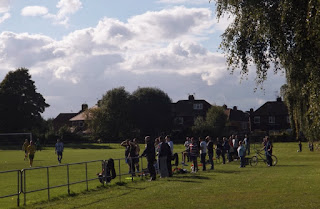 In the process, my neighbourhood stadium changed from Yokohama's Nissan International to Acomb's New Lane, home to the 129-year-old York Railway Institute since 1926. The step 11 side were having a summer every bit as turbulent as mine.  "Sporting Life and Strife," reported the York Press following an aborted AGM that attracted 400 of the club's 2,800 members instead of the more usual 20.  Hit with a change on rates relief for Community Amateur Sports Clubs, the directors had voted 7-6 to split the RI into five sections, reducing its overall turnover by enough to avoid a £70,000 annual tax bill. When the members got involved it was soon apparent that many disagreed.  "I'm gratified by the strength of feeling shown," said the club president, "but we must get a solution.  Doing nothing is not an option."

The RI's players had been doing plenty on the pitch, the 11-time York Football League champions winning four and drawing one of their opening half-dozen games.  Their seventh opponents were one of the few with an even better points total, Huntington Rovers the early pacesetters with five wins from eight. Even so, there wasn't much of a build-up: New Lane's gates had notices for a slimming club and a league match played three weeks previously, there was a bouncy castle by an empty rugby pitch and, more promisingly, round balls being skied over  a couple of heaped trestle tables in the clubhouse car park.  "It's a charity thing, innit?" said a bloke, gesturing towards a stack of used toys. 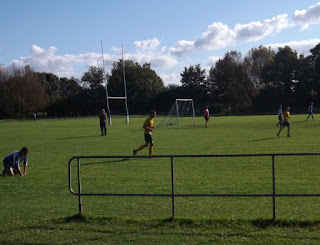 The pitch had a metal rail on three sides and a try line on the other. "Any person caught urinating against this fence will be prosectuted" read a sign while players took turns to piss against a nearby tree.  "Do you want to kick off early?" an RI official shouted across.  "Ref says we can start at five to and it's a few more minutes in the pub."

"Big first 20," clapped RI's manager. "The first 20 minutes are really important so communicate and get stuck in."  "Bit of talking," echoed the keeper before letting off a prolonged burp.  Huntington put the kick-off out for a throw-in then attacked the next time they got the ball.  The home keeper misread the bounce and two seconds later his team were one behind with three minutes played.  "Sorry lads," he said, more quietly this  time.  "We're half asleep," roared a voice from halfway.  We were still inside the "big first 20" when RI's captain rolled the ball to  Huntington player, failed to cut out a pass with his hand, and then watched from the ground as a second goal went in off the post.  "It's alright talking but we're not listening," the keeper pointed out.  Just before half-time, Huntington played all the way through midfield, a forward looping the ball over the goalkeeper and nodding in to the empty net at the other side.  "We go again, don't we?" an RI player said.  "We've got no-one to blame but ourselves." 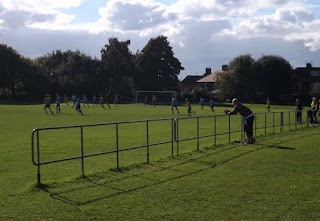 "We can still win this if we stop arguing and belive," the RI manager said at half-time.  Four minutes later a Huntington forward strolled through the defence and rolled a fourth into the corner of the goal. It briefly spurred the railwaymen on, the number 9 firing a shot in before doing enough to put the keeper off as RI scored a quick second. "The ref's missed three offsides in nine seconds and a clear foul there," a spectator tutted. "The problem is that they come from different areas like the West Riding and they don't...look at that marking at the back!"  He broke off as Huntington cheered their fifth goal. There was a pause.  "Shocking," he finally said.

With time running out and the RI rugby union team seven points to the good on the next-door pitch, the home footballers managed to reduce the gap to two once more.  "Big 10," shouted their manager.  But this time it wasn't.