Third time lucky and six weeks late, I finally make a game at the Dringhouses Sports and Social Club, stop five of the fifty-ish pitches in the York Minster Engineering League. Like Osbaldwick and York Railway Institute, Dringhouses are among the competition's heavyweight outfits, winning the championship 12 times since deposing Olympia Cake & Oil Selby in 1932-33.  Much of their more recent success stems from the work of stalwarts such as Colin Mole and Frank Prole, who stepped down from the club's committee in 2005 having amassed 53 years and 33 trophies between them.  Mole was once a schoolboy player at Middlesbrough, Prole arrived by way of Accrington Stanley, Scarborough and RAF Command.  "I'll still be there every Saturday to support the team," he promised the York Press. "It'll be nice to go into the bar after a game and instead of selling raffle tickets, I can enjoy a few pints." 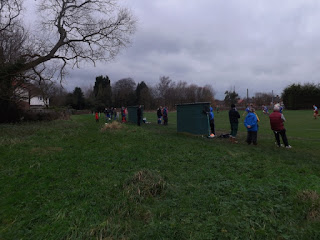 The first things you see from the bar are a railway line and cricket field.  There's a conifer hedge half screening the train traffic, a sign prohibiting "the exercising of dogs" and a fishing net propped against a dugout, used to scoop balls out of a muddy stream of water by the side of the football pitch.  Named after a go-kart track, the visiting team, F1 Racing, clatter and squelch out of the changing rooms, forming up in a huddle as one of their players jogs across from the obligatory pre-match piss against a tree.  "All the best," the two managers say.  "Plenty of talking," instructs the referee.  "Straight in, boys.  Pressing, yeah?" shouts a defender as the Dringhouses keeper belatedly ambles over from halfway. 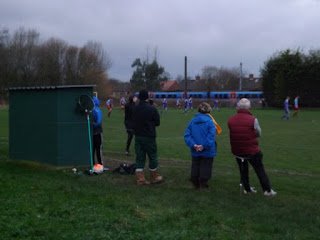 "Pieces" and "Feet" urge the home dugout as Dringhouses gather up a loose ball and work it down the wing.  "Travel," someone advises.  "Options," says the manager as the cross comes in, adding "Drive" a split-second before it's headed into the net.  "Wake up," screams an F1 player.  "Alert," claps the Dringhouses bench.  They're two ahead with their very next attack.  "That keeper's rubbish," a kid says to his dad.   Dringhouses take matters into their own hands, their goalkeeper chucking the ball out and then watching as it sails almost immediately back over his head.  "Terrible, that," says the home manager, the error so grave it almost stings him into a sentence.  Both sides push forward relentlessly. "Get the fucking thing in the net," an old bloke advises as the ball richochets around the penalty box.  Just before half time, a corner squeezes through the F1 keeper's legs.  "Easy as that," the old bloke claps. 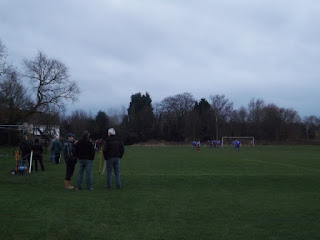 "If in doubt, just don't worry about it.  Know what I mean?" reckons the Dringhouses manager at the break.  "Effort, workrate, squeeze further on and chase everything."  An injured player limps his way along the touchline.  "You want to get some physio on it," says a bloke with a stool on a metal spike.  The sun comes out, tempting a few more spectators away from the bar, but nothing much happens until there's a bust-up in the penalty box and the Dringhouses keeper says something to a foreign player that's audible to everyone besides the referee.  "Ey, ey, ey," admonishes the F1 left-back, "Ey, ey, ey," adds a spectator, wagging an index finger over the touchline rail. "We all heard it," the victim tells the ref, who mutters something about being distracted as he swiftly backpedals away.  People are still pointing at each other as Dringhouses break through midfield and tap in a fourth, and though F1 score again late on the remainder of the game peters out along with the daylight.  "They need to stop the crosses and work harder tracking back," an F1 fan tells his son as they walk towards the car park. The kid hoofs his ball in the air and looks back at the pitch, slowly formulating a response. "Can't we watch a more successful team?" he finally asks.