At 11 o'clock it was looking very much like another blank weekend.  The Northern League hadn't managed a full programme since the end of November, only a pair of FA Vase ties and a single Division Two fixture beating the wet weather.  South Shields against Morpeth was postponed for the sixth time, leading Julio Arca, the winning captain in the 2001 U20 World Cup, to turn out in a friendly on a 3G pitch at a local comprehensive school. The games I'd earmarked for Leeds had already gone the same way as Newcastle United's chances of a trophy this season, and the options nearer York were shrinking with every passing minute.  "Still waiting," tweeted the luckless Tadcaster Albion.  "No game in 28 days," lamented Selby Town. By some miracle Knaresborough had been gifted "clear sky and sunshine", a combination latterly as rare as a ministerial mea culpa or a goal glut at St James' Park*.  "Great pitch drying weather," the town's football club promised.  "Fingers crossed," replied Teversal, their prospective opponents at Manse Lane. "It was on and then it started throwing it down and it could have been called off," Knaresborough boss Paul Stansfield said later. "A lot of effort went in and we had to repay it." 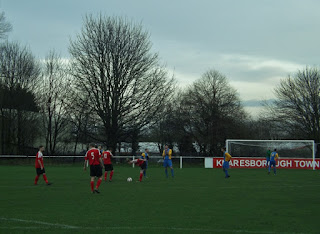 Stuck between semi-detacheds, a petrol station and an industrial estate, the ground - improved to meet grading requirements when the club were promoted into the Northern Counties East League in 2012 -  is neat and tidy but doesn't score much when it comes to aesthetics.  There are a couple of metal stands straight out of a box, a portakabin, pale-brick clubhouse and a corner squeezed off limits by the back wall of a playgroup building.  A bloke in a fluorescent jacket squelches gingerly along the touchline as the teams warm up on some nearby grass.  "Churn that pitch up and there'll be hell to pay," someone jokes as the officials set out on a pre-match jog.  "Is it working?" wonders a voice as the tannoy crackles on.  Postponements elsewhere push the crowd up to 130, the second highest of the day in a step 6 league. "What do you think we'll be watching today?" one spectator says to his mate,  his face turned to a page in the programme recalling previous January fixtures against the likes of Border Regiment, British Railway Nomads and Harold Styans.  "Touch and go," a bystander states in a tone that brooks no prospect of dissent. "It'll be a wonder if any of them can stand up."  Two men in tweed debate the merits of Klopp's gegenpress.  "What do you think of our manager?" asks one. "Well, the players are a lot fitter than last year," muses the other. 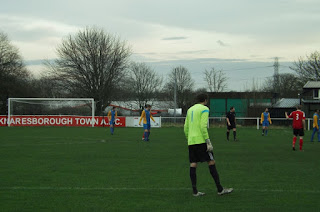 The home team whack an early chance against the goalkeeper's legs - "If you want to get out of this division those are the ones you have to stick away," one of the tweeds reckons - and tuts and groans are more and more audible as passes run out, goalkicks drop short and bodies thud to the sodden ground.  "Keep hold of the bloody thing," yells a bloke pessimistically sporting wellies as Teversal dispossess one Knaresborough attacker before gifting it to a second, Brad Walker steering the ball away from the keeper's limbs and into the net.

The referee swiftly becomes the main object of ire, showing the first of six yellow cards within minutes of the goal.  "You'll have to show one of those for every single tackle," rages one spectator.  "Give yersel' a shake," a second spits out furiously.  "Cloth head!"  "Wooah, woah," cautions a third, "you know what the conditions are like, referee."  A fourth helpfully suggests he should "Grow a pair".  "Dire," thinks a fifth. "He hasn't got a clue."  Somewhere amid the flurry of bookings Walker heads a second goal when the Teversal keeper leaves a cross he assumes is going out only for it to bounce back into play off the top of the bar; with 20 minutes to play the striker thighs in a hat-trick.  "Proper team performance," the man in wellies exclaims as the improving home side wrap up a fifth win in sixth games.  It's a whole lot better than Town managed during their two seasons in the Northern League: their first, in 1909-10, notable mainly for the fact they outdid York City, who propped up the table after registering 746 different players.  Twelve months later Knaresborough had emulated their neighbours with six points from 22 games and dropped back into the Yorkshire Combination. "Could still go up yet on this form," a fan enthuses.  If they do, it'll be the highest level Town have played at since those weekly pre-war hammerings around the pitches of County Durham. 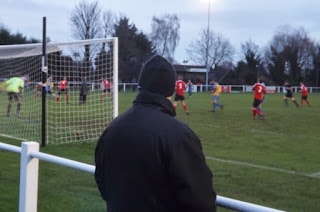 "It's this metal that makes your feet cold," someone moans, banging his heels against the few steps of terracing.  The rain starts falling again, the pitch gets even slippier and two players crash into each other, Knaresborough's Joel Freeston attempting what looks a lot like a leap over a Teversal sliding challenge.  The ref races over and pulls out a red card. "Eh? Eh?" wellies wonders aloud. "Shove it referee," a now familiar voice shouts out.  "You bloody cloth head!"