After a midweek washout back on Tyneside, I spent a Saturday afternoon at Shildon's Dean Street  - indisputably one of the jewels of north-east football at any level of the game - as the swashbuckling home side went 25 points clear and all but sealed a first Northern League title since 1939.  The 11th-tier York and District League Premier Division was simultaneously drawing closer to its own denouement, 2012-13 champions Dunnington beaten 2-0 at Wiggington Grasshoppers, the green and whites cutting the gap at the top to just two points with three games still to play to the long-time leaders' one. 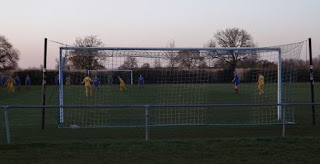 Two-time York League Cup winners, the Grasshoppers don't have any top-flight titles but were the first club side of the Premier League's Sam Byram.  Born in Thurrock, the future Leeds and West Ham defender moved north with his father's bank job and was schooled in New Earswick, a century-old model suburb planned out and funded by one of  York's philanthropic chocolatiers.  "A Rowntree man would return to his three-bedroomed home with living room and parlour, tend his own fruit trees and vegetable garden and watch his children play safely on an ample village green - all laid on for six shillings' rent per week," the Independent reminisced in 1999.  Two and a half miles from the city centre, the community still has almost 3,000 inhabitants and, at Rowntree's insistence, not a single public house, the alternative sources of fun a village hall that once hosted the likes of  Procol Harum and Pink Floyd and a Sports Club where midtable F1 Racing - formerly the works team of Regional Railways North East - were entertaining Church Fenton White Horse. 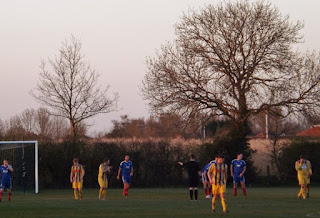 After three successive promotions,  F1 have slowed down a bit this season, the team now named after a go-kart track following up their second-tier title with eleven wins, ten defeats and a single draw from 22 top division games.  Church Fenton are six points and three places further back, dropping to ninth in the 14-team table after a 9-0 weekend spanking by Old Malton St Mary's.  "Same as Saturday, yeah?" says the F1 left back.  "Switch on boys," adds a midfielder before he hits a crossfield pass that bobbles over a boot and goes straight out of play.  "Can we swap the ball, please?" a third player complains.  "This one's shite."

The game's one of two played on adjacent pitches bordered by hedges on three sides and a rail on the other, passenger trains to Scarborough cutting behind twin perspex dugouts and a single advertising board. Aside from those involved in the match itself, there are precisely seven spectators - and two of those are dogs. F1 score a pair of quick goals - the first a four-man move that starts with their own keeper - and go three ahead within 20 minutes, the Church Fenton team all stopped as they wait for offside.  "Just enjoy it," an F1 player celebrates.  "Fucking hell," thinks one of the visitors' defence. The home left back has to tape up his right boot, which starts flapping open at the front, and a substitute doesn't turn up until the stroke of half time. "Didn't finish work until 20 minutes ago, did I?" he says.  "The game's not over yet," manager Ian Yeowart tells his team. The moment he's finished, four rush off for a piss in a hedge. 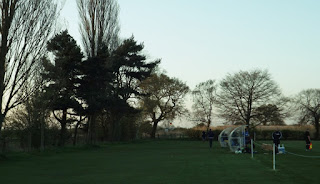 The second half continues at an entertaining pace, Church Fenton putting a shot into a cornfield before Yeowart's side nod in a fourth from a free kick.  Seconds later, the visitors finally hit the net themselves.  "We're back in it here, lads," the scorer says optimistically. "Let's keep this up to the end." More correctly sensing that the scoring is done the few watchers start drifting away as the sun drops slowly behind the railway line, a substitute wandering over to take a photo on his phone. Elsewhere in the division, a deflated Dunnington side lose 1-0 at home to lowly Tadcaster Magnets and Wiggington go down by a two-goal margin at Old Malton St Mary's, who take their third set of maximum points in just five days.  "Yet another twist," the York Press reported, St Mary's, champions in 2012 and 2014, now certain to lift another title if they win two and draw one of their three remaining games.