It's been an eventful last eight months at "Pontefract's longest established, highest profile and top-ranked football club."  Promoted as runners-up after 16 years outside the North Counties East top-flight, Pontefract Collieries have since lost one manager - the long-serving Nick Handley dismissed just two hours before a training session - one chairman and 24 of their 39 league games, thrashed by six-goal margins three times before the middle of October and by a total of 11 goals to three in their last two games.  The faltering home team have only two league wins since November and start the season's final week next to bottom of the division and with just three games remaining to overhaul two of the sides above. “I’m going to be looking to put the club in a good position so that we can take it into the Evo Stik in the next 18 months," Chris Parry had confidently said when he was tasked with replacing Handley at the end of last year. 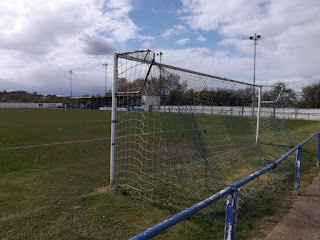 Formed in the late-1950s,  the Colls have dropped out of the top-flight twice since joining the NCEL as founder members in 1982, their bleakest season a grim 2007-08 campaign in which they won just one of 32 matches, propped up the table and only escaped dropping out of the league altogether by restructuring in the competitions below.  There have been brighter moments, too: back-to-back promotions in 1983 and '84, two Floodlit Cups, a Wilkinson Sword Trophy and career starts for Dave Penney, who played or managed at nine Football League clubs after being scouted by Arthur Cox's Derby County, ex-Rotherham United striker Andy Hayward and Paul Newlove, a world record transfer signing after giving up football for rugby league. 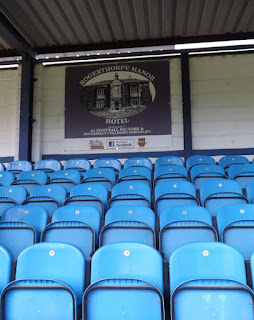 Pontefract's ground, built up at the time of the 1984-85 Miners' Strike and further improved with hundreds of flip seats from Manchester City's Maine Road, has been blighted by theft, vandalism and subsidence from old mining work.  The only sign is half hidden by a traffic light and there's a dirt track beside a spoil bank left behind when the Prince of Wales Colliery - opened in 1860 and still producing 1.3 million tonnes of coal a year - was closed in 2002.  A train cuts above the opposite side of the ground and the Ferrybridge cooling towers rise up beyond the far goal.  At the turnstile, there's a handwritten sign and smiling volunteers selling raffle tickets ("2nd prize very LARGE basket of spirits and wines, 3rd signed JAMES MILNER football shirt...9th Dulux FLUFFY DOG") and programmes.  The bar's showing the end of the early Premier League game, a kid throwing darts next to trophies piled by a stack of ring binders, and a pair of coach seats are parked under an FA Charter Standard Club sign by the gents.  "I wasn't expecting much," says Andrew, "but this is lovely."  A previous visitor had been just as complimentary: "A gem, full of character but at the same time retaining a certain charm." 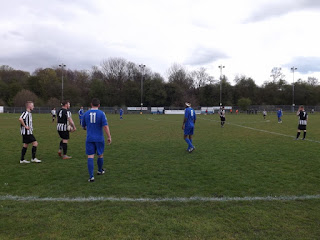 "Support your LOCAL club," the Colls Facebook page had implored, but the crowd is small - "Probably not much higher than the late thirties if you take out the committees," Andrew reckons" - as we near kick off.  "Big winners," demands a Pontefract player demands as they finish the warm up.  "Clipstone have left their cones all over the pitch," someone moans as the teams re-enter the pitch through a metal cage at the side of the main stand.  "Let's get organised early," says one Clipstone centre back to another.  "Keep that defence tight," a home fan yells across the ground. 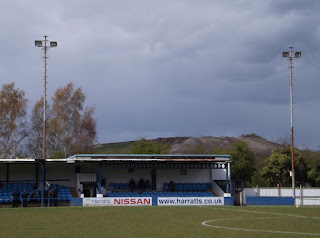 Pontefract miss with two first-half chances, players simultaneously disputing the award of a throw in and a missed handball. "Cut it out, liner," one player advises the official. "Fuck off man," Clipstone's left back shouts. After a bright opening, the visitors fade as an attacking force and it's the home team who look the likelier to edge ahead.  Despite their efforts,  it's still goalless at the break.  "Your raffle's been claimed," says the bloke in the PA box as we greedily head towards a tea hut promising the delights of 'Steak Canadian', 'Spam Sandwiches' and 'Other Items (50p)'  just hours after polishing off a St George's Day Special of beef stew and Yorkshire pudding by a ruined castle in whose dungeons King Richard II once starved to death. "I could have another one of these spam sandwiches," Andrew reckons as the sides run out for the second half. 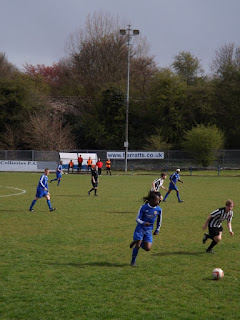 Colls have a set piece palmed over the bar and find the outside of the post with the resulting corner kick before Phil Lindley heads in the opening goal.  Another set piece is played wide, crossed back into the centre and Lindley rises highest to nod into the net.  "Not even a free kick,"Clipstone's manager moans as a Pontefract player limps back towards the centre circle and a defender kicks the ball away off the referee's leg.  The home side miss a one-on-one and then shoot into the ground with two players in space on the six-yard line. "We've not done too bad," says a fan behind the goal.  "At least we've scored once." 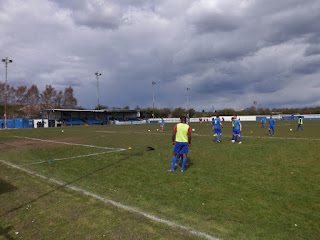 With only seconds left a Clipstone player's felled by a trailing leg and the referee points to the spot.  "You bent get," shouts a home fan. "He's going to save this," Clipstone's keeper says.  The kick goes left but so does a gloved hand, turning the ball around the post.  "Told you," says the keeper.  The victory - only Pontefract's third since winning at Clipstone in November - keeps the home side level on points with Liversedge and leaves them one behind Brigg Town with a game in hand and two left to play.