"Bokelj stadium," the taxi driver told me, jabbing his hand in the direction of a few trees and a cracked breezeblock wall.  "But I like water polo and boxing," he grinned. "Our football is shit."  It was, it appeared, a widely held view: while the national team has drawn three out of four meetings with England, beaten Wales and Switzerland and made it as far as the play-offs for Euro 2012, the Montenegrin First League - the top tier of domestic club football since the country narrowly voted for independence from Serbia in 2006 -  is among the worst supported competitions anywhere in Europe, its average attendance of 555 only very slightly higher than the numbers who regularly watch Workington in the seventh-tier Evostik Premier League. 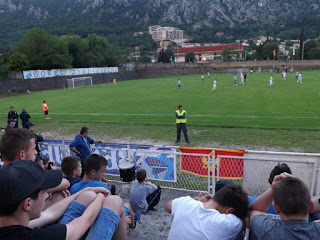 Perhaps unsurprisingly, the First League's international reach is as low as its crowd figures, UEFA currently ranking it between the top-flights of Luxembourg and Lithuania and none of its title holders ever progressing through the second qualifying round of the Champions League. Only Buducnost Podgorica have made any kind of impact elsewhere, twice finishing sixth in the Yugoslav First League, where they played between 1975 and the departure of clubs from four of its member nations in 1991-92. Buducnost supplied three of the 18 players that won the 1987 World Youth Championship for Yugoslavia, Predrag Mijatović going on to win 73 caps and score the only goal of the 1997-98 Champions League Final for Real Madrid.  Another former Buducnost midfielder, the sublimely talented but temperamental Dejan Savicevic, had already won the competition twice with Red Star Belgrade and AC Milan. 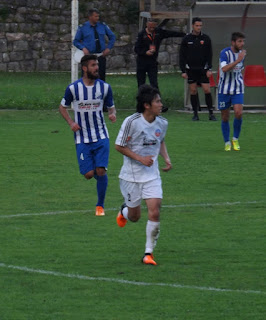 Despite the plastic Red Star and Partizan balls hanging outside tourist kiosks and the occasional foreign ultra symbol stickered on a wall, Kotor is no great football city.  Formed in 1922, Bokelj had never been higher than the second tier of Yugoslav football and played in the shadow of a water polo team that won a national league and cup double in 1986.  When Montenegro broke away from Serbia - Savicevic prominent among those who urged an independence vote -  Kotor's footballers were placed in the Second League, winning promotion through a play-off in 2007 and drawing 0-0 at Rudar Pljevlja in their first ever top flight game. Two years later, Primovac Kotor won the Euro League in water polo and Bokelj - relegated after a single season - could only finish sixth in the second flight. "Even the smallest child here knows the rules of the sport," the leader of Petrovac's Bestije 1986 ultras told Water Polo World after watching his team lose another Euro League final in 2010.  Bokelj, meanwhile, played a single season in the First League between 2008 and 2013 and were even outshone by provincial neighbours Grbalj, two-time qualifiers for the UEFA Intertoto Cup. 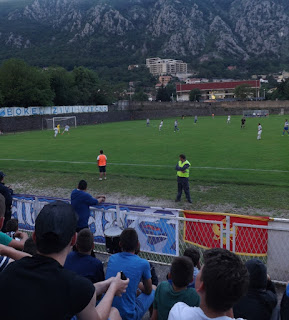 The Stadion pod Vrcem is in the decidedly untouristy Skaljari district, by an abandoned hotel with no windows and bushes sprouting from its roof tiles, a few open-fronted snack stands and a space for coach drivers to park up while their tour groups are busy elsewhere.  The entrance is along an unmarked concrete path which skirts and then crosses a stream.  "Two euro," asks a bloke seated at a plastic garden table.  "Cheap," I say, inanely.  A rusting gate opens on to the single concrete-stepped stand, where a few early arrivals are sitting on chunks of polystyrene and folded up carboard while tipping packets of nuts into their mouths.  There are no floodlights or toilets that I can see and the only cover is a corrugated oblong just about big enough for five people to squeeze under. The terrace ends abruptly by a grassed over rubble heap three-quarters of the way to the corner flag.  'Bokelj Zivi Vjecno' (Bokelj Live Forever), reads a board behind one goal.  At the other end of the pitch, the top deck of a cruise liner protrudes above the tree cover. "Hey Kotor," claps a kid in a Fidel Castro t-shirt before returning to his phone. 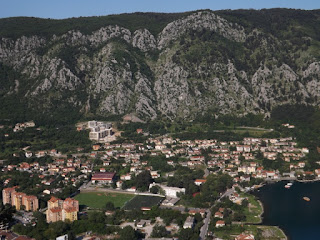 Five games into the third and final round of the 33-game season, Bokelj are in an unprecedented fourth position and are just about holding off FK Sutjeska Nikšić for a place in next season's Europa League.  The visitors, Rudar, were bankrolled  to two league titles and three Montenegrin Cups by a family of drug smugglers before Darko Saric, "the cocaine king of the Balkans" was sentenced to 20 years in prison by a Serbian court.  This season, perhaps coincidentally, they're well adrift of the leaders in third.  When the two teams clatter down a metal staircase for kick off there are between 4-500 paying spectators, including a smattering of Wags in summer dresses, a family who turn up with house cushions and a dozen or so fans in replica shirts with a drum and four flags that they sellotape to the fence.  "Bravo!" they chorus as a home defender goes in for a tackle and wins his team a throw, though the type of pinged crossfield passes that would leave Steven Gerrard and an English crowd purring go completely unremarked.  The small contingent of police pass round a bottle of water, the drum hangs unaccompanied and its owner leisurely drags on a cigarette as the sides pass the ball around in the sun.  When the PA announces the score at another game there's a half-hearted cheer while the bloke next to me checks his betting slip for the time of the goal.  He's no sooner scrunched it up in disgust than Dejan Đenić, a much travelled Serbian formerly of club sides in Slovenia, Holland, Azerbaijan, Lithuania and Poland, stoops to head in for Bokelj.  "Dobre!" one of the Wags claps enthusiastically.  The next biggest cheer of the half is when the sun finally dips behind the mountains and there's no more need for everyone to screen their eyes. 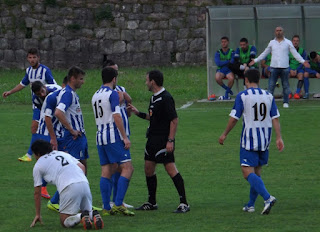 After the interval I'm flanked by a chain smoker in a Royal Marines Commando hoodie and a bloke decked out in Real Madrid tracksuit top and bottoms.  "Luka Modric has football intelligence," he says, among several other things that aren't quite so similar in English and Serbo-Croat.  I'm more interested in Rudar's Ryota Noma - one of only two players not from Serbia or Montenegro - who wears number 2 but darts and hustles about in attacking midfield, dropping short passes into feet that are rarely if ever returned in the direction of his run. Bokelj have a shot tipped away and several heads pop over a fence dividing the far side of the pitch from what looks like a semi-dilapidated hospital building to see what's going on.  For all the attempted promptings of their Japanese playmaker, the visitors manage little until ten minutes from the end, a goalbound poke kept out by the keeper's legs before a follow up swipe is hacked unceremoniously away.  The fourth official raises a board showing three minutes of time added on; a home player immediately goes down with cramp while a second is substituted off.  The whistle blows, everybody roars and the players come across to salute the packed stand.  "Bravo!" shout a pair of fans in the colours of the water polo team.  With Mladost Podgorica on the brink of a second title, and runners-up Budocnost playing Rudar for the Montenegrin Cup, Bokelj, little Bokelj, are just five games away from a first ever trip to Europe.