The last time I paid to see an England team play was in November 1994 when Kevin Keegan - top of the league with Newcastle United - had temporary charge of the U21s. Nicky Butt, Sol Campbell, Steve Watson, Shay Given and Steven Carr all started the game at St James' Park. Sunderland's Martin Smith - to the manager's later fury - had his every touch of the ball noisily booed by many of the 25,000 crowd. While the ordinarily sure footed Keegan was rightly embarrassed, he was for once out of step with the public mood; club sides trumped all.  If England  didn't leave you indifferent, it was probably because it was another source of the multifarious slights inflicted by outsiders on your region, your city and your team. "Watching England's for lower division fans that don't have any decent away trips to look forward to,"  a bloke in a black and white shirt had opined between songs about European qualification and Andy Cole, whose 41-goal season had mystifyingly failed to earn him a call up, during a 'B' international at Hillsborough earlier the same year. "That and southerners. If there wasn't anyone from Newcastle playing, I wouldn't be here." "It's always felt secondary," a Leeds fan elaborated in Tom Gibbons' English National Identity and Football Fan Culture.  "International games drift in and out of your life and England's never felt like my team."  Manchester United's support sang for Argentina in response to the barracking of David Beckham after the 1998 World Cup. "Why should I feel a connection to a country that is arrogant and detestable when it comes to football?" a Liverpool fan wondered.  England, increasingly, was the other: the 'No Surrender' thugs; the coach who never picked your players until they'd transferred somewhere else; the kind of people who give you Tory governments, pay to fly banners from planes or willingly appear on Arsenal Fan TV; Ashley Cole's wage demands; London culturally and economically stomping on your face forever. "Fuck England," a Newcastle season ticket holder once put it. "They don't care about us and I don't give a stuff about them." 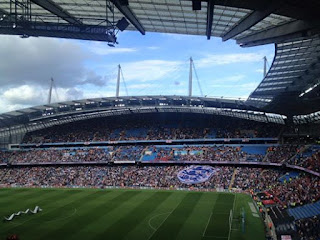 Some things hadn't changed. "If Daniel Sturridge played for us and Jermain Defoe for Liverpool, then Defoe would be going to France and Sturridge staying at home," a Sunderland fan raged when Roy Hodgson announced his provisional squad for Euro 2016.  The sole north-east presence among the 26 players was Andros Townsend, though that felt more a consequence of the hapless state of the region's two biggest clubs  - Sunderland flatlining while Newcastle, fatally holed by incompetent recruitment and the risible Steve McClaren, contrived to relegate themselves for the second time in a decade - than any bias on the part of the England coach.  In Manchester city centre, the songs were all about the Second World War. "There were ten German bombers," fans chorused to the bemusement of the Sunday afternoon passersby. "And the RAF from England shot them down." 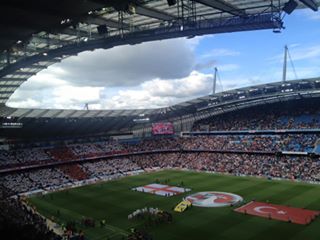 The new England was more evident at the ground itself, a thirty-minute walk from Piccadilly Station. There were slickly produced videos and marketing speak, messages from corporate parterns ("Celebrate Responsibly") and fans wearing jester hats and half-and-half scarves.  "If we see you on the big screen, we want to hear you as well," the PA droned with all the vacuous excitement of children's TV.  "Who. Are. You. Here. To. Support?" Red and white t-shirts had been handed out at one end of the ground, supporters forming a St George's Cross as they took their places behind the goal.  A Three Lions flag was passed down the touchline, and while there were muted boos at the start and end of the Turkish national anthem, there were much louder cheers for Vardy and Kane.  Such was the depth of confidence in England's attack, not even the opposition's 13-match unbeaten run could dampen the crowd's optimism. "I put a quid on 4-0," said a bloke to his mates.  "Easy 2-0 win," another reckoned. 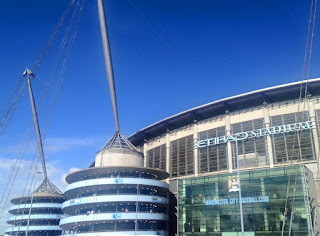 Vardy had already gone close to opening the scoring when Kane put England ahead with just three minutes played.  "Who are ya? Who are ya?" asked the home fans, gleefully anticipating a rout.  But then the visitors settled, the hosts began to flounder in defence and the crowd got edgier and edgier once Hakan Calhanoglu had deservedly levelled with the first goal Turkey had ever scored against England.  A shoe was hurled from the top of the stand and shouts of "Pass it" alternated with pleas to "Just get it in the box."   "Vardy's not been involved," the bloke next to me said to no-one in particular.  "He's had a crap game, Rose," he added a few seconds later.  "What does Sterling think he's doing?" 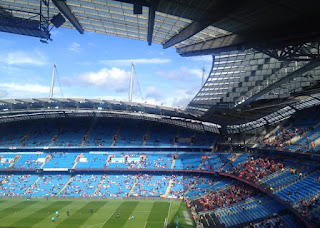 "Stand up if you hate the Turks" a group of fans demanded. The visitors started to boo as the chant half-spread to different sections of the ground.  My neighbour was averaging a "That's rubbish" every five seconds as England struggled to re-impose themselves in midfield.  "Go back to your kee-bab shops," slurred a bloke with a red and white stetson, tattooed cheeks and a Pompey OK patch on his shirt.  Hodgson switched formation, moving the previously ineffective Vardy into the centre of the field.  A few minutes later the Leicester forward was felled in the area, but Kane put the penalty wide. "Rubbish," thought the now familiar voice. "The money he's on he should at least be able to get it on target." The miss infuriated the Pompey fan too. "No surrender to the IRA! Scum!" he raged, apropos of nothing that was happening down below.  There was an embarrassed silence.  "And ISIS scum too!" he finished, swaying alone in the aisle.  The minutes ticked by and then, with just seven left and the 44,000 crowd beginning to move towards the exits, Gary Cahill headed a corner at the keeper, a defender prevented anyone from gathering the loose ball and Vardy sidefooted in the winning goal by way of the keeper's nose.  "Sunderland 'ere we come," celebrated the bloke in the stetson.  At the final whistle a few pissed Manchester United fans were doing their best to smash a soap dispenser. "We're wrecking your toilets," one chanted as he tried and failed to dropkick a door.  "Your cubicles are terrified."

People mixed more happily back in the city centre, where the souvenir scarves had dropped from a fiver to £3 and the songs were all about Vardy's parties and Hodgson's trip to France. "My first England game," said a Leeds supporter on the train back to York.  "Way they played today," his mate laughed, "it's probably your last one too."