When you travel the bowels of the football pyramid, bemusement is a familiar refrain.  "Do Ripon even have a team?" asked an incredulous workmate.  "I lived there for six months and all I ever saw noticed was the racecourse," wondered another.  You could be forgiven for not knowing much about a club that have suffered back-to-back relegations and recently finished rock bottom of a 12th-tier league, but Ripon City have been based at their Mallorie Park ground since the end of the Great War, have a stand that dates back to 1920 and celebrated their one hundredth year in 1998 with a World Cup scorer as their guest of honour. 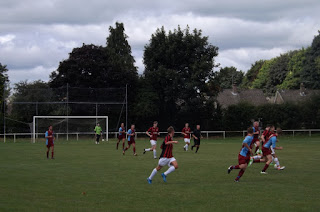 Demoted from the West Yorkshire League Division One after winning just three of their 30 league games, City also lost half a first team to neighbours Boroughbridge Athletic and three committee members plus chairwoman Sue Dennison - selected as one of 150 grassroots heroes by the FA in 2013 - who'd been involved with local football for 47 years and done everything at the club from washing to kit to refereeing games. "I feel like a big weight has been lifted off my shoulders. I can leave knowing I have done my best and I’ve given everything that I could have given. We wish the new regime well. They have a very hard task in front of them,” she told the Harrogate Advertiser. 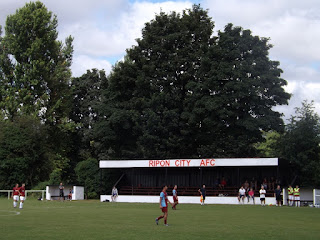 Things were finally looking brighter after last season's upheaval, City reinstating their reserve team after a half-season break, earning community club status and sprucing up their ground, the main stand painted white with Ripon City AFC neatly printed in red capital letters across the front.  The club's second warm-up fixture is against  Dringhouses in a game shifted to 11am to avoid a clash with the city's St Wilfred's Day parade. 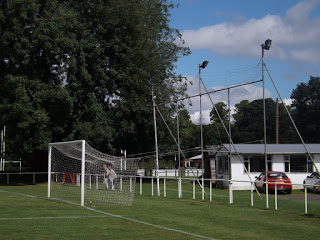 The bus takes over an hour to travel the 27 miles between the cathedral cities, the journey only enlivened when a bloke with four remaining teeth and a 1993-94 vintage Newcastle United training jacket gets on by the Roman ruins at Boroughbridge.  I do a quick lap of the Cathedral and Spa Gardens, recce a handful of pubs and then walk the 10 minutes from the market place to Mallorie Park. Dringhouses are going through their pre-match teamtalk when I arrive, their manager pointing down the wings.  The pitch is railed off, nets behind each goal kept upright by scaffolding poles and a whitewashed clubhouse by the entrance with a handwritten sign promising hot and cold drinks.  The stand has its back to the rugby club, its corrugated roof sloping upwards over five rows of blistered wooden bench seats.  Ripon's subs perch on the front, a pair of spectators sit alone at either end and there are 12 other onlookers dotted around the far side of  the pitch. 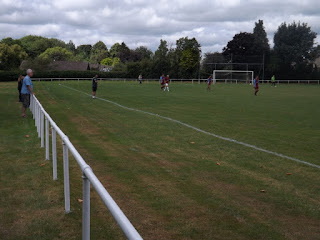 "Let's play the ball when we get the chance," claps a Ripon defender.  "Good lad," the Dringhouses manager says to each of his players in turn.  "Enjoy it, pal." "Pieces," somebody urges.  "Runners," another warns."Switch on early," Ripon's manager keeps on telling his team. "Stay tight, stay tight. PRESS 'EM!"  City ping one of the scaffolding poles, a coach having to scurry up a stepladder to reattach the net. A few minutes later they go even closer, clattering the crossbar from close range.  "I'd have gone low," says the man with the ladder.  With half an hour gone everyone comes off for a drink break.  "We're playing too fast," a home player diagnoses.  "We need to take a few seconds to see what's what."  The Dringhouses boss spends much of the remainder of the half making calls, breaking off once in a while to shout "Good touch"  and "To feet, to feet."  When the whistle blows, he doles out instructions under the trees behind the main stand. "Get in the shade, lads," he orders as a substitute wanders off to refill the water bottles. 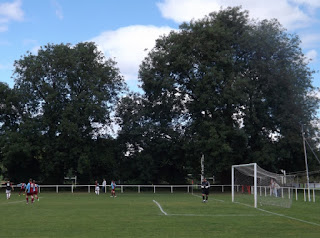 Ripon score soon after the restart and then send a spectator jogging across the carpark to retrieve their next effort on goal. "We've stopped playing, haven't we?" a Dringhouses centre back asks rhetorically. "Do some magic," someone shouts and a home player takes a bouncing ball on his chest and hits in at the keeper's near post. Dringhouses pull a goal back, the home side have a 3-1 lead, and then the visitors score twice in a few minutes either side of having a third attempt smack an ankle on the line.  "That Ripon keeper keeps coming out," a fan observes.  "They've just signed him," a hopper says.  "The secretary had to play there last year."  A couple of early floats pass by on the road behind. "They can't really develop this place with the houses over there," the hopper says. "There was talk of them moving to the barracks when it closes next year but I don't think that's imminent."  The players hang back to take down the goalnets as I set off on the four-mile walk to Fountains Abbey.  "Cracking game," someone says.  If you haven't been yet, get there while you can.