Northern cities which prospered on the back of their heavy industrial hinterlands, Newcastle and Doncaster are divided by almost 200 kilometres but indelibly linked through the footballing exploits of a single man.  Raised in a house that had no electricty, inside toilet or bathroom,  Joseph Kevin Keegan grew up using his younger brother's pram as a goalpost, washed cars to make some extra money and got his first pair of  boots when his dad won a bet on the horses. Overlooked by his hometown team, the diminutive teenager flunked a six-week trial with Coventry City and was only finally spotted by Scunthorpe United playing Sunday football while earning £6 a week as an errand boy at Pegler's Brass Works.  Signing as an apprentice with the Division Four team meant a 25% drop in pay, 6am starts and a two-bus commute from the family home to training; when he retired as a player 17 years later, Keegan  had won three Football League titles, four European trophies, one FA Cup, a Bundesliga title, been twice named European Footballer of the Year and scored 21 times for his country in 63 games, captaining England for six years until the 1982 World Cup. "He never stopped working, never stopped trying to improve both himself and his team," one admirer wrote of his impact on the Reds. "Without him, Liverpool wouldn't have made the step up from perennial challengers for domestic honours to a team capable of dominating across the continent.  Because Kevin Keegan really was that good."

While the boyhood Rovers fan never made it off the terraces at Doncaster's old Belle Vue ground, he would twice utterly transform the fortunes of the side his father supported.   The elder Keegan first left Hetton-le-Hole to fight in Burma and then moved his family south when mining work got scarcer on the County Durham seams.  The Keegans didn't stay in the north-east but the north-east stayed in them.  "Without ever being to Newcastle I felt this thing inside me...in my genes," he told the writer Martin Hardy after a third spell at St James' ended acrimoniously in 2008.  "I played football for dad," he confided to an earlier biographer. "Your roots are your roots, and there was a tremendous pull, an inevitability about me coming at some stage to Newcastle United." 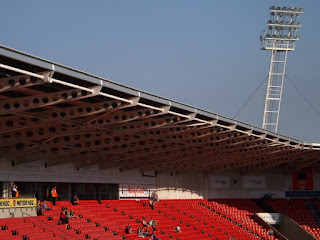 Keegan was in the dugout for the Magpies' only other pre-season visit to Rovers' Keepmoat Stadium, 18 months after the 15,000-seat stadium opened its doors in January 2007.  Two years later, an Andy Carroll goal moved the visitors three points closer to promotion from the Championship, the fatal undermining of the manager having ended in a dispiriting, self-inflicted relegation the summer before.  "The club can never go anywhere under Mike Ashley," Keegan insisted.  In the six years that have followed, the owner has yet to prove him wrong, though five new signings and the retention of Rafa Benitez have engendered rare feelings of optimism in a fanbase which had grown disillusioned to the point of near apathy under Pardew, Carver and Steve McClaren. 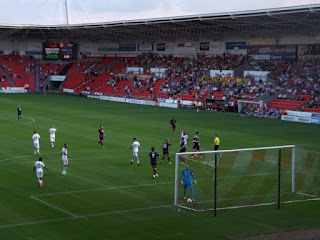 Red brick and utilitarian, Doncaster Station faces out over the back end of a supermarket and the side of a main road; the visual equivalent of one of Pardew's latter team selections. "Bit of a shithole, isn't it?" says a Newcastle fan lugging four cans of lager in search of a bus. I walk through a concrete underpass and emerge next to the grim vista of a high rise building with tattered England bunting blowing limply in the wind.  There's a bloke in a Doncaster shirt with 'Cardiff '07' written on the back, an industrial estate and then the ground itself, floodlights angled from each corner and lines of black and white shirted away fans already queueing to get in. 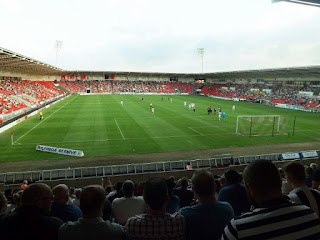 The Newcastle team stroll out to the sound of New Order's 'True Faith'.  "I feel so extraordinary, something's got a hold on me," sings Bernard Sumner.  It feels prophetic.  The sun shines down and the away end keeps filling.  "Toon! Toon!" a voice foghorns from a corner. "Black and white army!" two thousand voices reply. The visitors start with two new signings; three of the home side are "without number" and one doesn't even get a name.  It doesn't take long for the first tentative judgements of the new season to be made.  Matz Sels - Belgian title winner with Gent in 2015 and the Pro League's current Goalkeeper of the Year - only half clears a backpass with his first touch of the game: "Fucking hell! He's shocking him," the bloke behind me wails.  "Told you he was garbage,"  he nods knowingly when the keeper barges into John Marquis 15 minutes later.  "Five point five million from somewhere in Belgium and how many kicks has he fluffed already?" he asks as Sels picks Andy Williams' penalty out of the net.  "Five and a half million quid," he repeats despairingly during a later lull in play.  "What a waste, what a waste." 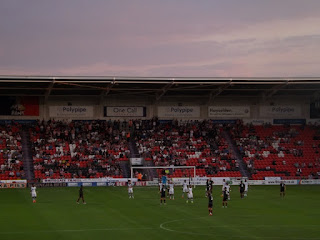 If Selz is nervy, Adam Armstrong is a livewire, stretching defenders with his pace and twice stinging the Doncaster keeper's hands.  Shelvey tries to push things forward but loses patience and blasts into the stand, Anita and Colback buzz into tackles but there's very little to get excited about until a simple corner routine brings a pair of unopposed headers and Williams' second goal of the game.  "Shite again," the voice behind barks.  "He's just flapping, man." 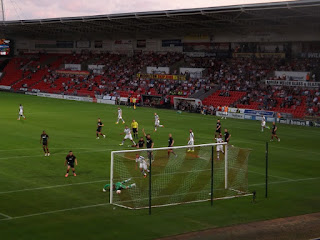 "In the first half, we didn't play at the level I was expecting," Benitez later says.  He responds to his team's pedestrian performance with a slew of substitutions for the second, Isaac Hayden - one of seven changes - looping a goal back within five minutes and almost adding another just 20 seconds later.  Armstrong smacks the keeper instead of the net, Dwight Gayle - all deft touches and sudden darts - is just inches away from tapping in before the otherwise impressive Shelvey treads on the ball and almost gifts Doncaster a third goal.  "Gini Wijnaldum, we want you to stay," the far corner choruses, swiftly followed by a less complimentary rendering of the same song for the wantaway Moussa Sissoko.  Wijnaldum comes on to muted boos and mopes around to little effect for the rest of the game.   A smoke bomb goes off in the away end; a boisterous cluster of Rovers fans bounce along to a drum.  Newcastle get closer and closer, Gayle, Gouffran and Thauvin all narrowly missing the target before Ayoze Perez finally squares the game in the first of seven minutes of time added on. "The feeling from the second half was much better and that is what we have to do," Benitez says.  Pre-season doesn't tell you much about a team, but for Rafa's Newcastle there's still work to be done.