It's the afternoon of my 36th birthday and we're wavering between a train ride to FC United or a dash by car to see Dunston at Staveley when a sat-nav error leaves Andy on the wrong side of a Manchester canal.  The FA Vase semi-final is hastily ruled out, I finish a three-hour journey from the Welsh countryside and am then told I have ten minutes and counting to dump two bags at left luggage, buy an onward ticket and make it onto the 13.11 from Piccadilly to Stalybridge.  During the fifteen-minute journey I discover the following events have occurred during my week among Russians in the wilds of North Wales: Sunderland have been knocked out of the FA Cup by Everton - "Best own-goal ever," says Pras - that neither Pras, Andy or fellow birthday boy Johan has the faintest idea what the result of the first test match between England and Sri Lanka was, that Barcelona drew with AC Milan in the Champions League, Stiliyan Petrov was diagnosed with leukaemia, and that British cabinet ministers, in a frantic scramble to divert the nation's attention away from pasties, granny taxes, quarter million pound dinners and all-round hapless buffoonery (yes, Gideon, I'm thinking of you), have managed to stoke a panic which leaves people hoarding petrol in milk cartons and a York woman with 40% burns. 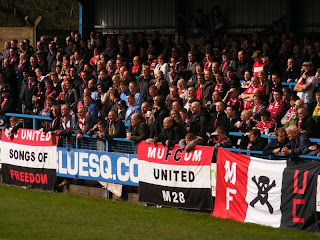 The recent news headlines have made a lot better reading for supporters of FC United, the fan-owned club they said wouldn't last until Christmas 2005 hitting a £1.6 million community share target to fund a 5,000-capacity stadium after seven years as reluctant tennants at Bury. With the landlords having first call on the facilities at Gigg Lane, the Rebels are in weekend exile at Bower Fold, Stalybridge, which by happy coincidence is also home to one of Britain's very best railway station bars.  Less serendipitously, our late arrival means it's also one of the most overcrowded, necessitating a quick bounce to the nearby Q Inn - officially listed by the Guinness Book of Records as the shortest pub name in the country - and the White House, from where a botched attempt to walk to the ground and a wait for a taxi combine to make us five minutes late for kick off.

There are 1,726 people in the ground when we pile through the turnstiles by way of a quick stop off at the burger van.  That's down from the near 3,000 who took in United's last home game at Gigg Lane, though the relocated Manchester Roadenders are making up for their reduced numbers by ratcheting up the decibels. "This badge is our badge" segues into "Hello! Hello! We are the Busby Boys", Woody Guthrie's gentle melody merging into Henry Clay's marching song chorus. The lull, when it comes, is almost immediately broken by the Sex Pistols' Anarchy in the UK: "I know what I want and I know how to get it. I wanna destroy Glazer and Sky!" 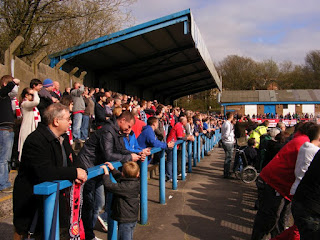 Befitting its regular owner's elevated status among the Conference North's top six, Bower Fold's a tidy, well-appointed stadium: 6,500-capacity, covered stands on every side of the pitch, and half-forested hills behind the all-seater Sir Tom Pendry Stand, renamed in honour of the long-time local MP and one-time Shadow Minister for Tourism and Sport. There's plenty of time to take in the view, the extent of United's dominance ensuring much of the game is played at a pre-season pace, with home players seldom hurried in possession and able to almost stroll away from their nominal markers at will.  It's a strangely languid display from Mickleover, who had won three in a row before Wednesday's 3-1 defeat by Buxton dumped them back into the relegation zone. Only Kristian Ramsey-Dickson, drafted in on-loan from Burton Albion, impresses for the visitors. With top-scorer Karl Ashton starved of service up front, United keeper James Spencer has so little to do in the first half he could almost join the crowd behind the opposite goal. 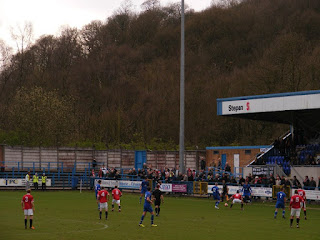 It takes twenty minutes until the deadlock is inevitably broken. Mickleover can't clear the ball, Matty Wolfenden plays in Mike Norton, who hits the ball past keeper Damon Clarke without breaking stride for his 16th league goal of the season. Behind the goal, fans launch into "He's Michael Norton, he's not from Gorton", hundreds of scarves are twirled in the air and handfuls of confetti blow across the concrete at the bottom of the stand.  Minutes later, Lee Neville crosses from the left and a defender heads the ball straight into the path of Wolfenden. Game over. Goal number seventeen for United's top scorer in the league. "They should have cleared it again," points out Pras. "Did you see Wolfie's volley?" a kid marvels to his dad. 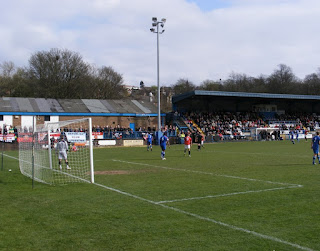 We head towards the bar before the whistle blows, just in time to beat the rush. "Players' food will only be served on production of a meal ticket," reads a sign taped to the wall, though even with the crowds FC attract there are precious few of those about at this level of football. "Ten in at a time, sorry," says the man on the door, a United fan-cum-matchday volunteer like those selling programmes, pies and lottery tickets, running the merchandise stall, operating FCUM Radio's live broadcast or hanging up the impressive array of flags: 'FC United. Cheadle Lushes!', 'Songs of Freedom' and 'Republica FCUM Margentina.' "Another twenty and that's it," says a second doorperson, looking at a line that stretches all the way back to the brick toilets.  "I heard we might be here next season," says a fan at the head of the queue. "Here?" I won't be coming if we are." 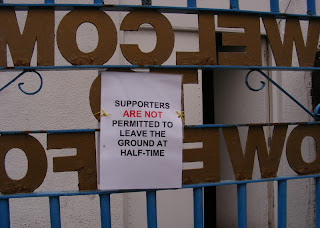 We're well into the second half when Adam Jones nods in a free-kick from the excellent Carlos Roca, prompting a brief flurry of action which sees Wolfenden nip in ahead of Clarke and substitute Nicky Platt roll the pass in for the game's fourth and final goal. "It's a better standard of football than I expected this season but we're also more inconsistent than I expected," says Mike Molloy, part-time FCUM DJ and one of the thousands of fans who part-own the club. "There are better teams around us but anything's possible with the individual ability some of our players have got." As if to underline that last point, left-back Lee Neville gets the man of the match award from the sponsors, while the club's website - whose report on the game is headlined "Rampant Reds Roll Over Mickleover." - opts for the equally impressive former Oldham and Wrexham striker Wolfenden. 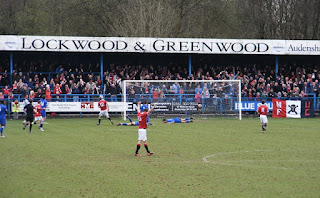 Hednesford's draw with Nantwich puts United three clear in the final play-off place as they chase a first promotion since the summer of 2008, although the knot of post-match drinkers gathered around the portable TV in the neighbouring Hare and Hounds pub are more immediately concerned with the number of points about to be dropped by Manchester City.  "City have scored," one yells through to the queue at the bar. "I know, it's 3-2," comes the shouted reply.  "It was. It's three-all now." "Bollocks."

We make it back to the station bar for more beer and the famous black peas ("They're just like peas in vinegar," Andy says, declining a second spoon). The night finally draws to an end back in Manchester, where I manage to fall asleep in a Chinese restaurant at the same time as forking one last scoop of rice into my mou...zzzz.

FCUM plus beer has a way of doing that to your Saturdays. Give it a whirl.