The first ever final of the Durham Challenge Cup took place at Monkwearmouth Cricket Club on an April afternoon in 1884.  Sunderland, originally founded in 1879 as Sunderland and District Teachers' Association Football Club, lined up against Darlington, formed at a grammar school meeting in July 1883.  Appropriately enough, the game would be an education for everyone involved. 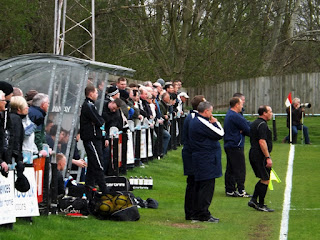 Sunderland had lost 2-0 to Tyne in the final of the 1883 Northumberland and Durham Cup before "a large assemblage" at Newcastle's Brandling Park.  A year on, sporting their normal colours of navy blue shirts and knickerbockers and urged on by a partisan crowd of 2,500,  the Wearsiders emerged 4-3 victors after what the Northern Echo called "a most unpleasant match".  Darlington appealed the result, the referee later admitting the winning goal had only been awarded after threats of violence from both players and spectators. The FA ordered the final to be replayed at a neutral venue and dispatched Major Francis Marindin - Crimean War veteran, founder member of the Royal Engineers Football Club, former FA president and eight times an FA Cup final referee - north to handle the game.  "An outstanding official who really knows the rules," was the commonly held verdict on Marindin's abilities.  Sunderland won 2-0 at Birtley.  It was the first trophy won by the fledgling club; within ten years they had lifted the first two of their six Football League championships. 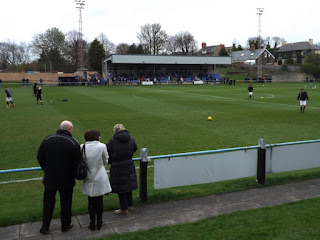 There's hard standing on three sides of the pitch, a grassy rise facing the main stand and a balcony of the Bob Paisley Bar overlooking the goal to the left.

Sunderland - winners of the cup a record twenty-one times - didn't enter their reserve side in a 2011-12 competition that's been contested by almost fifty clubs drawn from six different leagues. Durham City, Darlington and Hartlepool United went out in the early rounds, leaving Gateshead FC's blend of youth players and full-time professionals - finalists in three of the last five seasons  - favourites to retain the cup they won for the first time last year. The Tynesiders haven't disappointed, scoring thirteen and conceding only twice in four games against Northern League opposition.

Gateshead's opponents in the final, Spennymoor Town, are themselves fourteen-time winners of the competition and are currently chasing their third Northern League title in a row. "They'll undoubtedly be the strongest side we've faced in the Durham Challenge Cup this season," says Gateshead coach Paul Bryson, once a Spennymoor player himself.  His managerial counterpart, ex-Hartlepool United midfielder Jason Ainsley, is one of seven Gateshead old boys in the Spennymoor set-up. 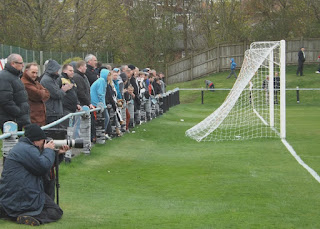 "Come on you Moors"

The final is held at the Eppleton Colliery Football Ground for a second successive year, the 10.45am Good Friday kick-off and threat of rain doing little to dampen the enthusiasm of the crowd. Developed to Northern League standards when Eppleton Colliery were promoted in 1992 having won two Wearside League titles and seven cups in the space of three seasons, the ground received an extra upgrade when Sunderland City Council spent £3 million relocating community services there, and is now maintained by the Hetton Town Trust and Sunderland AFC, whose reserve and women's teams are now the most frequent users of the pitch. Eppleton Colliery - Durham Challenge Cup winners themselves in 1990 - folded in 2005, resigning their place in the middle division of the Northern Football Alliance after back-to-back relegations and five bottom place finishes in the last seven of their seventy-six years as a club.

With six players injured, two suspended and the first-team in action over the weekend, Dyson sends out five full-time professionals to supplement his youthful squad.  Goalkeeper Tim Deasy played in the FA Cup third round during his 93 games for Barrow, Chris Carruthers - capped eleven times for England U20s - won the 2007 Division Two play-offs with Bristol Rovers, Martin Brittain turned out for Newcastle United and Ipswich Town, Chris Moore has won both the FA Vase and FA Trophy, and James Marwood - son of the Manchester City executive and Arsenal title-winner - is a former Newcastle United reserve. Deasy's called into action twice in the opening minutes as Spennymoor start brightly, and with the fleet-footed Gavin Cogdon driving through the centre and Craig Ruddy a constant danger down the right, nobody is surprised when Adam Johnston opens the scoring with only ten minutes played. "There's only one united and we're in the Northern League," sing the fans in black and white stripes behind Deasy's goal. 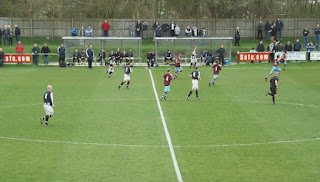 Gateshead try to take the sting out of Spennymoor's gameplan, passing the ball around midfield as the Northern League side hustle, snap and attempt to release the dangerous Cogdon and Johnston on the break.  Teenage forward Jordan Marshall bustles around but never manages to escape Leon Ryan at the heart of the Spennymoor defence, while  Chris Moore tries unsuccessfully to work openings down the left.  Right on half time a quickly taken free kick puts Cogdon in on Deasy, the striker celebrating the second goal with a handstand on the six-yard line as a few Spennymoor fans start a chant of "Easy, easy."

With Carruthers already off injured and the ineffective Marwood and Brittain withdrawn at half time, it's a less experienced Gateshead side which resumes after the break.  Moore plays more centrally, his direct running posing the occasional danger to the Spennymoor defence, but Marshall is too often as lonely as Andrew Lansley in a roomful of doctors.  Ruddy sees a shot bend tantalisingly wide, Deasy beaten, before Dan Moore nods in a left-wing cross for the third goal. "You're terrible man, Gateshead," screams a man in a Geordie baseball cap. "Nee shape at all." 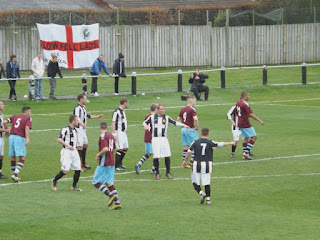 128 years after it was first contested, Spennymoor Town's Leon Ryan lifts the Durham Challenge Cup off a wooden trestle table by the side of the pitch (a slightly better look than the blue plastic chair it had been left on before the game).  Gateshead fans pack up their flags, the jubilant Spennymoor squad head off to celebrate with their supporters at Hetton Lyons Cricket Club.