By the end of the week I had to get out.

I'd been teaching Italian teenagers for five consecutive mornings in a corner of an otherwise empty school.  I'd walked up to and round the castle three times,  the nearest supermarket twice, had a visit from the local newspaper and seen several dozen hills, a trio of classrooms, one Co-op and a dining hall.  On Saturday morning everyone else left by bus for the Beatles Museum and Liverpool One.  "You could go to Prestatyn,"  someone suggested.  And so I did. 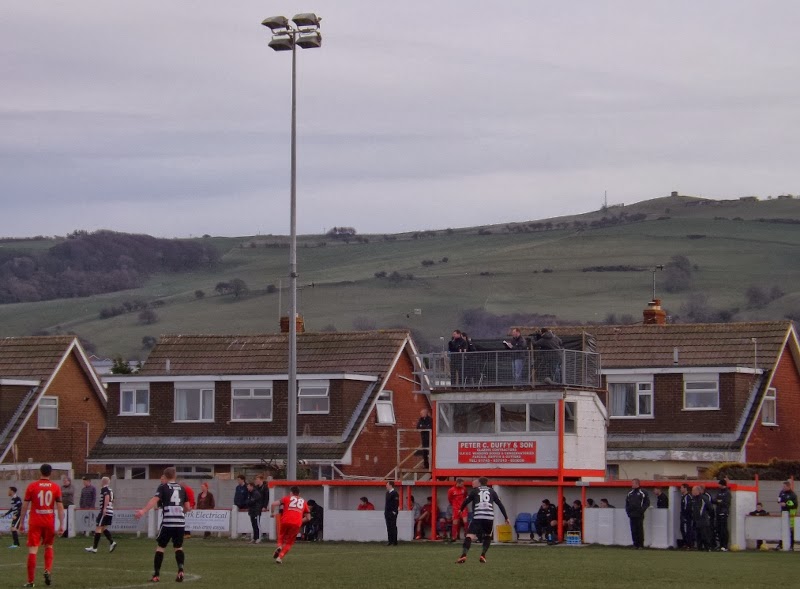 Truth be told, the town's football club had been on my to-do list for a while.  Birthplace of John Prescott and the Kwik Save chain,  I only knew it as a brief stop between Rhyl and Manchester Piccadilly, the place where Alan Partridge enjoyed weekend-long Wings binges - "the band the Beatles could have been" - and for a Philip Larkin poem that opens with the words 'Come to Sunny Prestatyn'.

Even on the warmest day of the year so far there wasn't much of that to be found on the north Wales coast. Wind, drab skies and dog walkers follow me along the brisk hour's hike from Rhyl town centre to the sign at the start of Offa's Dyke National Trail, virtually point to point between two of the twelve venues in the Welsh Premier League.   Immediately visible from the seafront, Prestatyn's Bastion Gardens ground backs on to a cricket pitch and a Pontins holiday camp, its near neighbours a crazy golf course, an amusement arcade and a plaque remembering a Beatles concert that has an insolvency notice blutacked underneath.  The first two pubs I try are eerily deserted, the Wetherspoons-clone on the main street standing room only, jammed with pushchairs and two deep at the bar.  Luckily, the football club has beer plus memorabilia, a smattering of red-shirted drinkers and a friendly, immediately welcoming vibe. 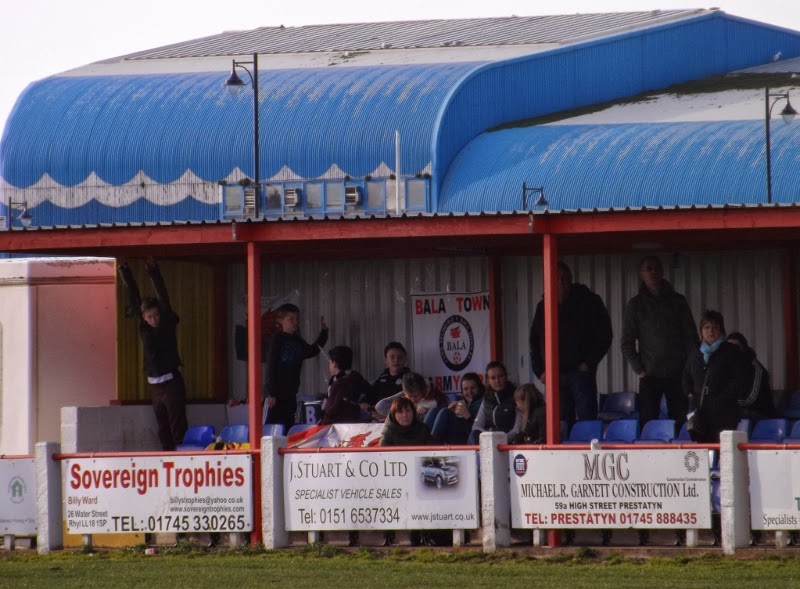 The Welsh Premier League's a world away from the bombastic, globalised and relentlessly comercial near-namesake operating across and within its borders.  "This is not a pot-hunting or title-winning club and never has been," said one of Prestatyn Town's founder members.  "If we can get to the top then all well and good, but there will be no broken hearts if we don't."  When the club was promoted in 2008, groups of volunteers worked around the clock for just over a week to ensure the ground met the WPL's grading criteria.   Merchandise is sold from a hatch as you walk through the turnstiles.  The seats in the solitary stand were donated by Shrewsbury Town.  Nonetheless, last season's debut Welsh Cup win had, remarkably, bagged Neil Gibson's side a first foray into European competition, where they defeated Liepajas Metalurgs on penalty kicks before losing 8-0 on aggregate to  HNK Rijeka.   Equally improbably, today's visitors Bala Town - hailing from a village of fewer than 2,000 people - came within an away goal of victory over Levadia Tallinn just a decade after playing in the Wrexham Area League.

Bala's support arrives with four flags and a drum, which they rat-a-tat whenever their team attacks.  We're a quarter of an hour in and just past the fifth flourish when Sean Thornton - still bottle-blonde but nowadays several rungs below his Premier League peak - finds Ryan Valentine, whose cross bounces in front of the hesitant home goalkeeper, hits a stanchion and drops into the net.  The away side have the swirling wind largely at their backs,  Jon Hill-Dunt's goalkicks barely reaching the halfway line while an attempted up-and-under spins backwards and goes out behind the place it was kicked. But with Lee Hunt - once of Bala and with over 150 career goals in the WPL alone -  the sort of forward you could aim at a gatehouse and expect it to give way first,  the home side have significantly more luck battering their way through the centre while slinging balls in from the flanks.  On 29 minutes Hunt harries the ball away from a Bala defender, Chris Davies cuts it inside and Gareth Wilson deftly scoops into the top corner.  Moments later, Hunt's upraised boot is just centimetres away from a second.  "Sort it out, lino," a Bala fan yells. 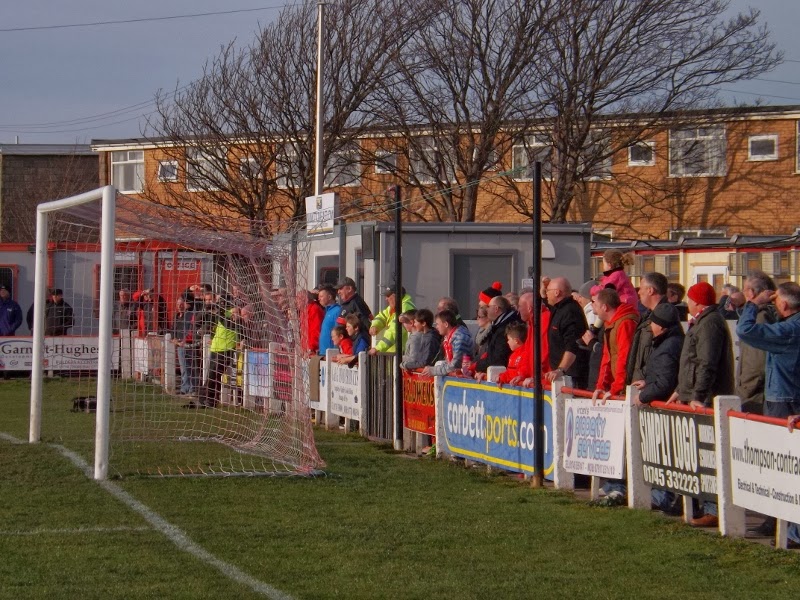 After a stuttering opening quarter, the second half sparks into life when Hunt tumbles in the penalty area, the referee signalling a goalkick with the majority of the crowd screaming for a foul.   "No contact," the linesman explains.  "Embarrassing,"  says a defender. "Do you want to think about that again, referee?" asks Gibson from his technical area.  Ten minutes later Bala's  Kieran Smith is tugged to the ground. This time the referee doesn't hesitate.  "Soft one, that," says a home substitute as Ian Sheridan calmly rolls in the third and final goal.  The Prestatyn supporter to my right takes out his e-cigarette, pauses for a moment, and then silently mouths an obscenity.