My World Cup started in the third week of May with two flights and a taxi, the latter from Buenos Aires' Ezeiza International Airport to the Estadio Monumental Antonio Vespucio Liberti (El Monumental for short), the home of Club Atlético River Plate. I was met by Andrew Aris - last seen outside the turnstile block at the Daejeon World Cup Stadium in 2002 - Aldo Baccaro and Juan Cruiz La Banca, whose nine-hour tour of the stadium took in a first-team training session, the club museum, a theatre, cinema, subsidised cafeteria, gymnasium and primary school, all located on the underside of the terracing where Argentina fans celebrated the 3-1 win over the Netherlands in the final of the 1978 World Cup. 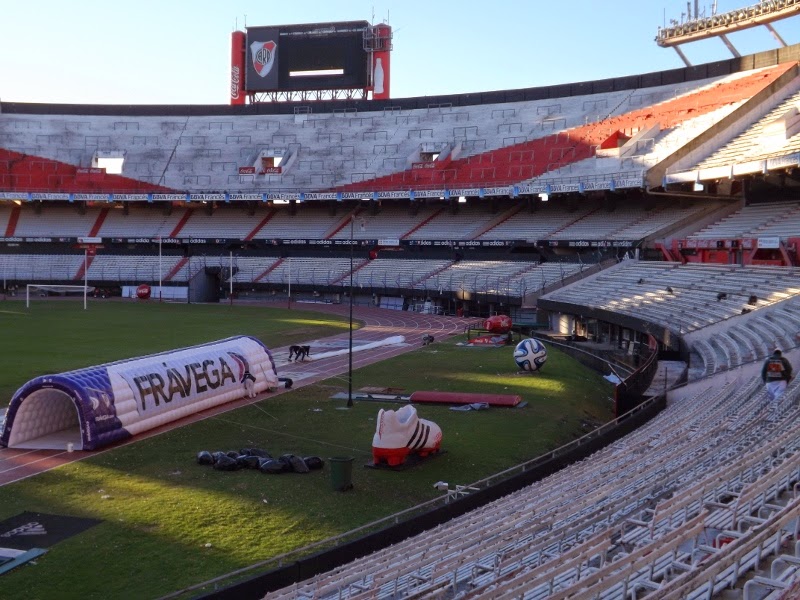 Omar Larossa played 64 minutes of that final. "I wish I could tell you, to put into words," he said to an audience at Boca's La Bombonera, his voice creaking with emotion, "how it felt to kiss the Cup". Larossa was flanked by three of the 1966 quarter-finalists branded "animals" by Sir Alf Ramsey, Antonio Rattin - "an outstanding player," thought England's George Cohen - a genial figure at 77 years old. "Bobby Charlton was a wonderful midfielder,"  the ex-politician remembered after hearing where I was from.  "Bobby Moore," rhapsodied Silvio Marzolini, once rated the finest left-back in world football and later Diego Maradona's coach. "A great man." 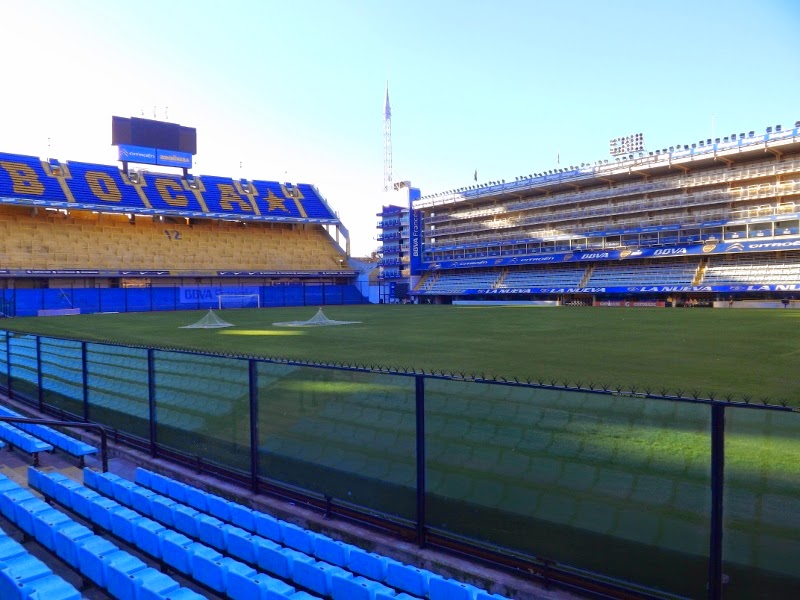 Two days later I was at Racing Club for a press event with the 1967 club world champions.  Juan Carlos Cárdenas, scorer of the decisive goal as six players were sent from the field in Montevideo, prominent among the guests.  "Celtic were a big team," he recalled.  103,000 fans had seen the first leg at Hampden Park, 100,000 more packed El Cilindro for the second.  From there it was a short hop over the river to Uruguay, the same journey made by over 25,000 Racing supporters for the third and final leg almost half a century before. "Where are you from? Which team do you support?" the customs officer asked me at the port town of Colonia del Sacramento. In Monetvideo there was a gate on the main street for the 1930 World Cup winners, though La Celeste's current crop could only labour to a single-goal victory over Northern Ireland on a rain-sodden pitch at the Estadio Centenario. A few days by an Atlantic beach in Punta del Diablo were followed by a second division play-off back in Colonia - the crowd swelling into double figures as a neighbouring school let out for the afternoon - and an overnight cross-border journey to Porto Alegre, killing a morning at the bus station before the 21-hour trip north to Sao Paulo. 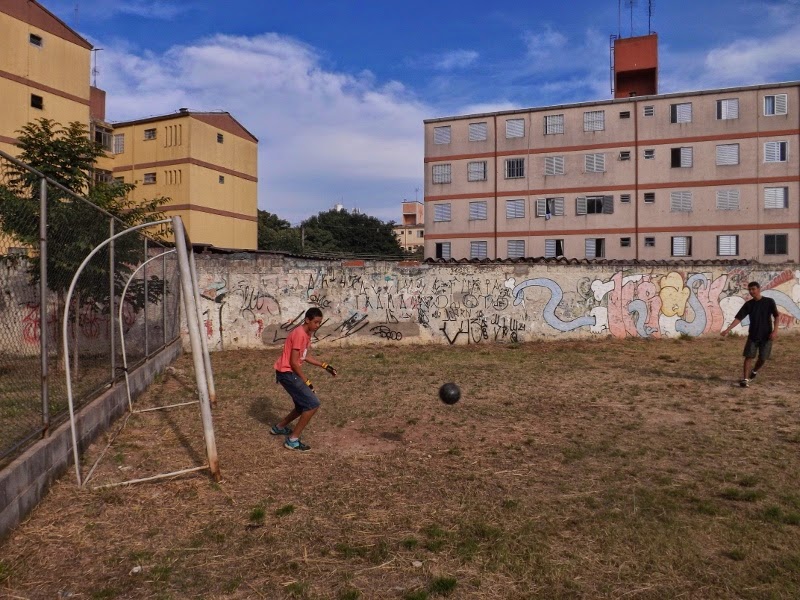 I arrived in Latin America's biggest city on day three of a crippling public transport strike. There was a rope drawn across the Metro entrance and a taxi queue that stretched all the way around the concourse.  We edged forward like a defensive wall for an hour and a half, handlers shouting destinations along the line as they tried to whittle it down.  "We are always in favour of football but this tournament is more about money than sport," a fellow passenger said as we finally left Tiete Station in the rear view mirror. "The government doesn't have money for anything except FIFA." There was just as much cynicism at the Arena Corinthians itself, where football photographer and fixer extraordinaire Caio Vilela  took us four days before the tournament got underway.  "When will it be finished?" I asked. "Sometime in the second half," came the now familiar reply. 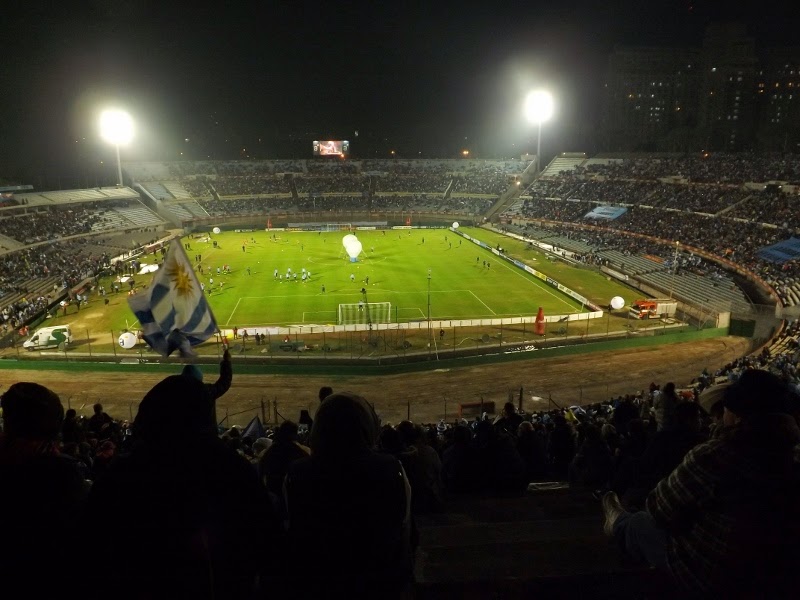 Rio de Janeiro on match day one was a very different place.  Chileans mixed with Colombians, Argentina fans played beach football with a combined France and Scotland team, and Brazilians thronged the Copacabana Fan Fest.  "There are different  queues to buy and pay for your beer," moaned one English fan, "and only about fifty toilets for everyone to use."  I chose to watch Spain play the Netherlands from the beach outside, the Atlantic lapping just metres away as Robben turned Ramos, Pique and Casillas into Boumsong, Bramble and John Karelse.  A few days earlier I'd clambered sweatily up Sugarloaf mountain with Paul Finnerty, taken a wrong turn and seen England's oceanside training complex from above.  One half against Italy aside, it would be the only impressive thing about Roy Hodgson's team. 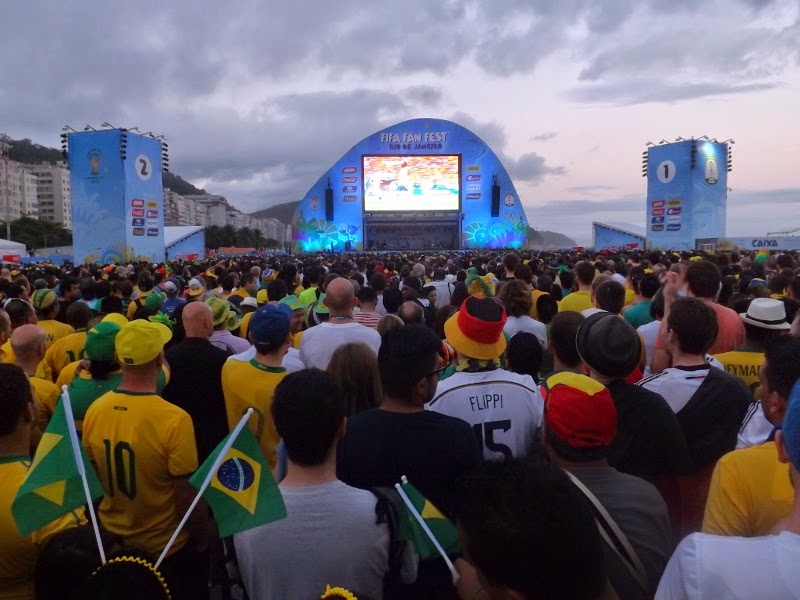 Brazil vs Croatia on Copacabana Beach

Enough buses. From Rio I decided to fly back to Porto Alegre.  The temperature dropped by ten degrees and the French fans were all congregated in a single city centre bar.  A member of their Football Federation arrived in a sponsored car, supporters lining up to pose for photos.  "If he was one of ours we'd be queueing to throw things at his head," said a bemused waiter.  I watched England lose to a Balotelli header in the company of an Irishman, two customers and a bar owner round the corner then headed back to the hotel.  "Not much of an atmosphere, is there?" mused Laurie Hanna. The next morning a broken door foiled my plan to meet up with the Honduras squad pre-game, leaving my mood no more positive than the graffiti - No Fifa, FIFA Go Home and Sem Copa among the politer messages - lining the Goal Walk on the way to the Beira-Rio ground.  I ducked back out of the cordon to see Laurie in a bar owned by Andre Vieira, a Copa Libertadores winner with Luis Scolari's Gremio in the mid-1990s before a peripatetic career took him to Switzerland, Romania, Moldova and Costa Rica. 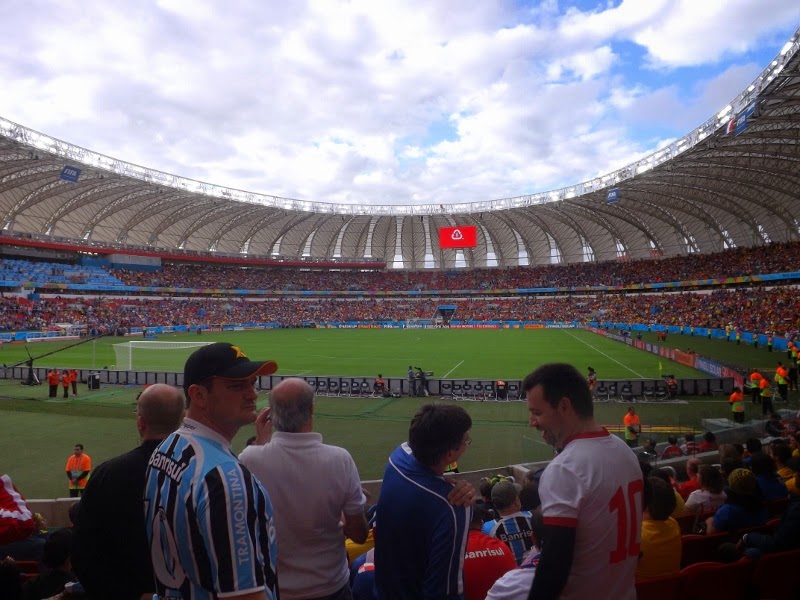 Honduras could have done with him in a starting eleven which was reduced to ten when Wilson Palacios was dismissed in the move that led to France's first goal, Karim Benzema coolly converting a penalty awarded when Palacios barged into Paul Pogba.  The Brazilians in the crowd - supporting the underdogs with memories of the 1998 final yet to abate - whistled in derision, the woeful French support countering with a muted 'Allez Les Bleus' before attempting to start yet another Mexican Wave.  Benzema was instrumental in the second strike,  the first ever use of goalline technology at a World Cup sending the BBC's Jonathan Pearce into on-air meltdown. Inside the ground, the boos just got louder.  While Honduras hacked and harried, France - with Matthieu Valbuena buzzing and Yohan Cabaye at his imperious best - controlled, Benzema scoring a third goal with eighteen minutes left.  "I'm sorry," Andre told Laurie, his Honduran flag a souvenir of the 2010 tournament, when we returned to the bar post-match. 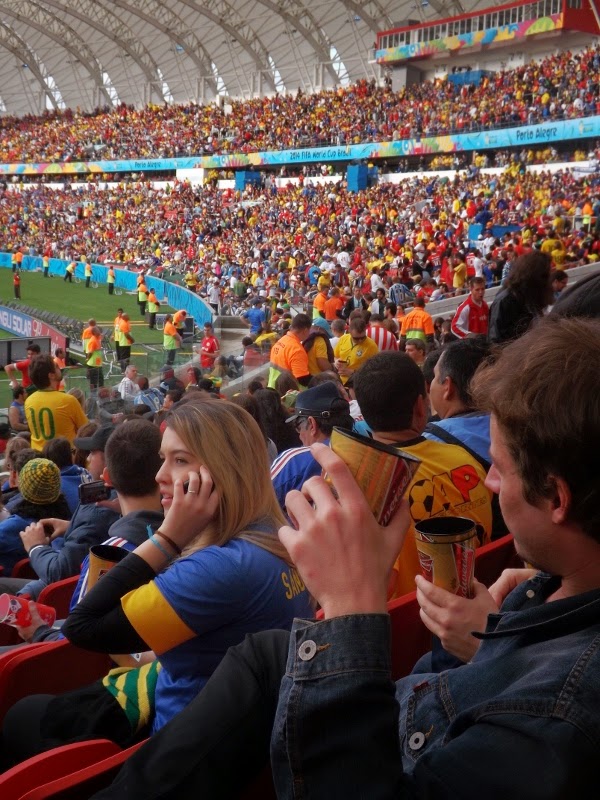 When the French left the Australians arrived.  My final afternoon in Brazil was spent watching Germany demolish Portugal in the company of a few hundred Fanatics dressed in matching hoodies, t-shirts and baseball caps.  I flew back the next day, beating England home by a week. No luxury hotels for me but no contest when it came to who had the better time. 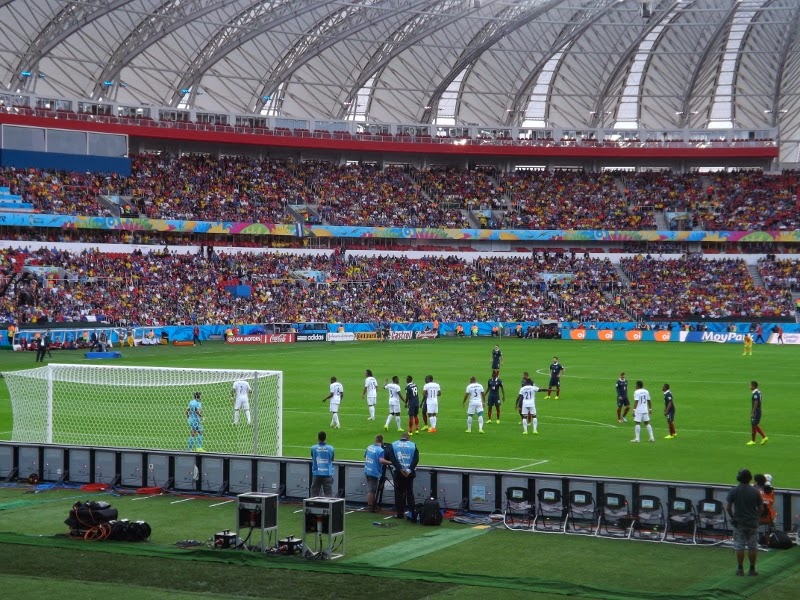 Laurie Hanna's Honduras flag (on the left), the only banner covering a FIFA sign.


Roll on mid-January and the African Cup of Nations.