If you thought it had been an eventful summer for Leeds United and Blackpool fans, try keeping track of the comings and goings at little Richmond Town.

Scoring over 100 goals in each of their first two seasons meant players were always vulnerable to the relative big boys of the Northern League, the teams that finished third and then fifth disappearing over the summer when manager Chris Lax and all but one of the squad departed only months after they'd taken on Middlesbrough Reserves in the semi-final of the North Riding Senior Cup. Unsurprisingly, this season hasn't started so well, Town fielding only ten players during a 7-0 hammering at Horden Colliery Welfare and fifth from bottom of the Wearside League table with five points from their opening nine games. Last weekend Lax's replacement quit and the club were unable to raise a team to travel to Cleator Moor Celtic. "It all appears to have gone tits up," as one online observer delicately put it. 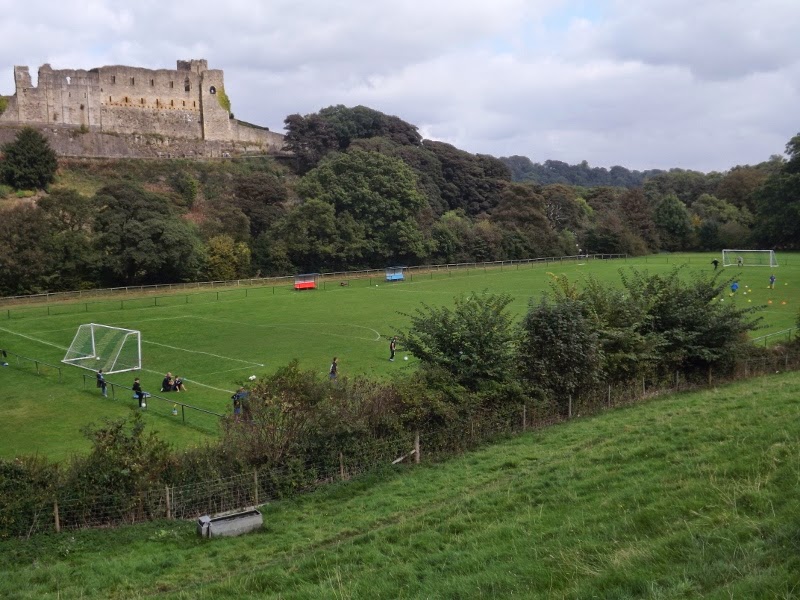 Lax took charge at Northern League Stokesley for two matches, but left the club along with its chairman due to what the Northern Echo described as "internal politics".  Days after the Cleator Moor debacle, and after "a great deal of consideration", he returned to Earls Orchard to "try and steady the ship for the next few games".  The first of those was a 2-2 draw away at Harton & Westoe, the second this afternoon's Monkwearmouth Charity Cup tie with Jarrow FC. 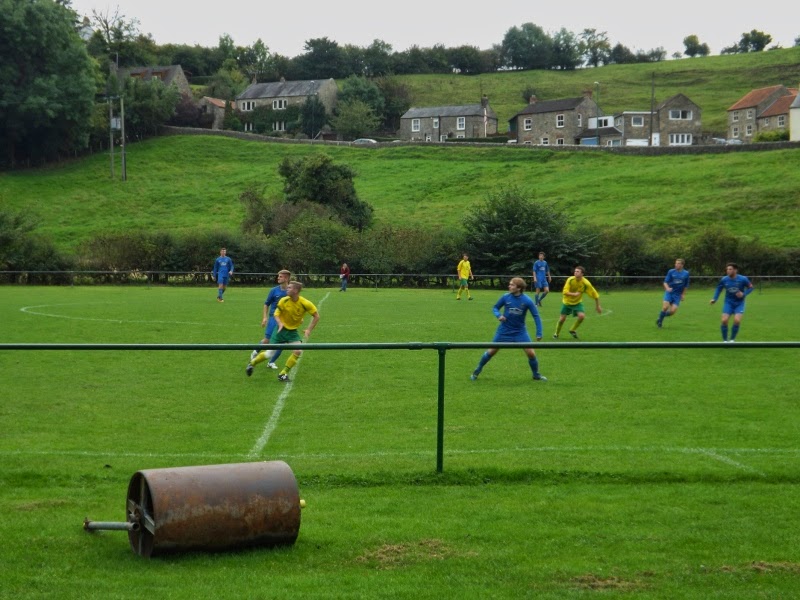 Earls Orchard had long featured on my to-do list, not least with its current tennants looking to move away.  Jack Charlton opened the clubhouse in 1975 and a perimeter rail and corrugated steel dugouts have since been added, but with further development restricted by the ground's picture postcard setting and the Northern League requiring floodlights, fifty seats and covered standing for promotion, the club have been scouting for a home capable of sustaining higher-level football.

Richmond's round ball team was founded in 1945, called itself the Young Conservatives for a time in the otherwise swinging 60s, and lifted a quadruple of Teesside League trophies -  the championship, Macmillan Bowl, Lou Moore Trophy and Saturday County Cup - in 2012 without garnering much of an interest in even the local newspaper.  Never traditional footballing territory - Rob Andrew, Cambridge and England fly-half, is easily the most famous of the town's sporting sons - there are, nonetheless, signs of burgeoning interest: I spot a Richmond Town tracksuit in a queue at Greggs the Baker and a scarf in a shop window next to signed Middlesbrough and York City shirts. 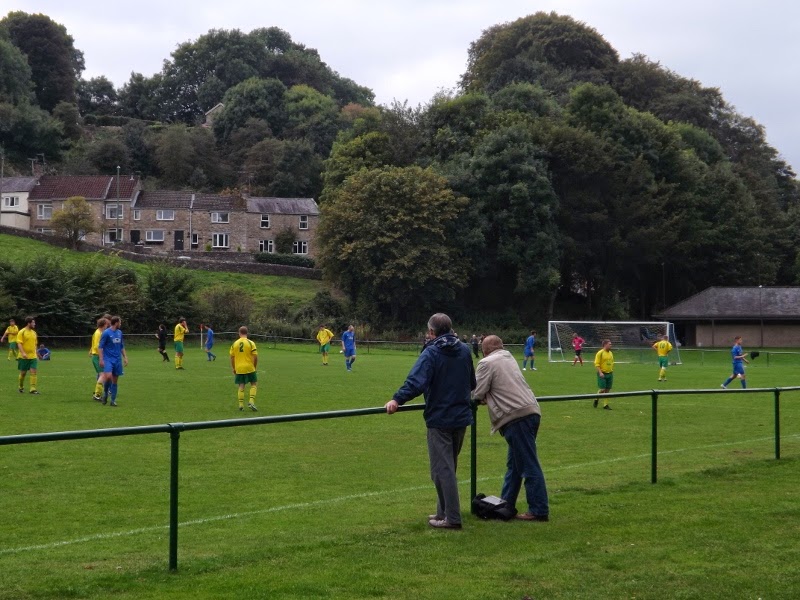 Earls Orchard is five minutes downhill out of the cobbled Market Square,  overlooked by the ramparts of the 11th century castle, and fringed by rabbit holes, the Coast to Coast walking trail, stone houses and the Swale, purportedly the fastest-flowing river in England. As I arrive, the teams are held up by last minute alterations, the officials pacing out the distance from penalty spot to goal-line while the man on the entrance gate scurries across with a stepladder. "Has anyone mentioned the nets, mate?" nods a spectator knowingly.  "Big hole in the left-hand side.  You'll see it."  The referee is already there.  "If you tip one over, you might get your hand stuck in the gap," she warns the Richmond keeper.  "It'd be the first one he's reached this season," one of the assembled crowd jokes.  A substitute arrives to repaint the penalty spot.  "All this to go two nowt down in the first few minutes again," says a Richmond fan. "I just don't want you to lose a keeper," the referee is telling Chris Lax.  "We've only got one," he replies, balancing someone on his shoulders as the net is pulled slowly over the crossbar. "What a female referee does," reveals a spectator, "is make you concentrate more instead of gobbing off at the officials."

The game begins ten minutes behind schedule but quickly makes up for the delay.  Jarrow push forward, Richmond counter and the ball breaks down their left.  "He's in there," says a local as the ball arcs off the number 9's boot. "Bloody hell, that's some start!" "Did that last season too," adds the Richmond keeper, pointing towards the bulging net. "Quality."  Jarrow respond by digging in and pinging the crossbar.  "Don't tell me to fuck off," the linesman suddenly complains to the visting dug-out.  "Just you be quiet," responds a man with a walrus moustache and blue bib over his jacket. "Get back over there and do your job.  Good lad." 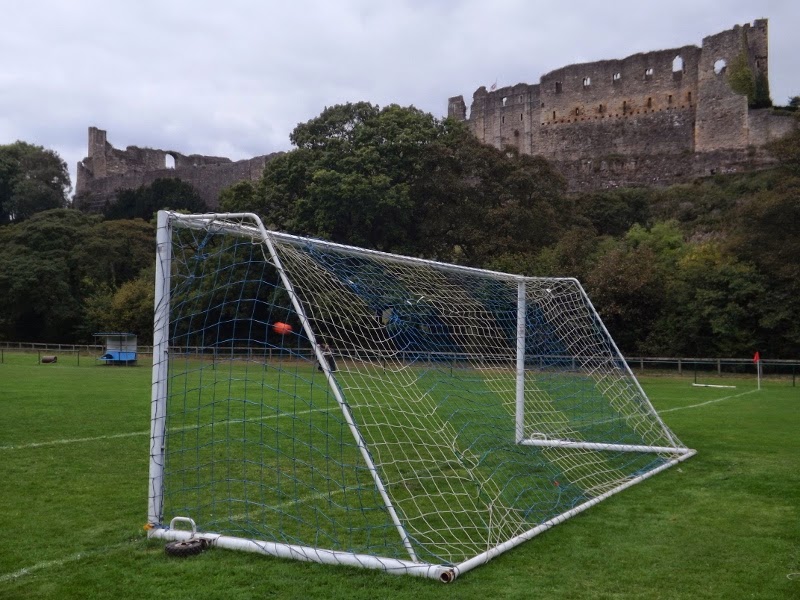 "I'll tell you what," says a Richmond fan in slacks and a jumper, "I went to Manchester the other day and they've got a new area called Salford Quays with the BBC sports centre.  I went downstairs and there was a dalek."  He pauses and surveys the pitch. "They've been the better team."  "Aim for the cock-eyed post," yells the Jarrow assistant as his left back lines up a free-kick.  "What a lovely afternoon," says jumper and slacks."One more like that and you're off," the referee admonishes a visiting player who's just loudly questioned her ability to control the game. "Is he alright, ref?" one of the visitors asks of a player who's been thwacked by the ball.  "Just a bit dizzy," she shouts.  "Aye, that's two of you then," he mutters in reply. 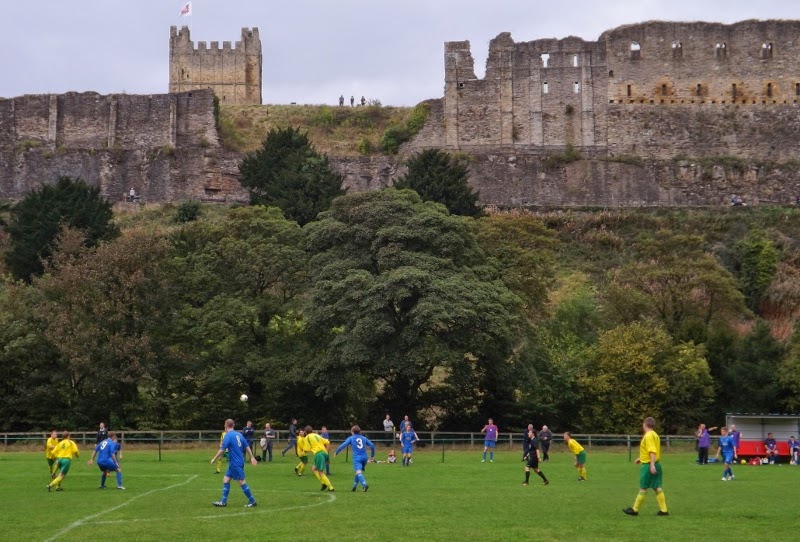 Both teams have goals disallowed, Richmond beginning the second half with three good chances to extend the lead before Jarrow squander a pair of their own.  "He looks good when he's running," a spectator explains after a forward shoots into the goalkeeper's body.  "It's when he gets the ball the problem starts."  I leave the ground with the full-time whistle in my ears and the words of J.B. Priestly playing on my mind.  "Another and altogether more splendid kind of life," he'd written about his experiences at Bradford's Valley Parade. Splendid indeed.  Earls Orchard on a late-summer afternoon is something that every football lover should experience at least once.