Little did either of us realise it at the time, but Chester City Football Club were about to have a small but potentially pivotal role in a three year old's childhood.  On Saturday January 5th 1980 Pink Floyd topped the charts and Newcastle United topped the league.  Beaten once in two months, the black-and-whites opened the new decade by smashing Sunderland 3-1, prompting one or two of the more exciteable football pundits to make Bill McGarry's team an outside bet for the FA Cup.  It was a viewpoint which sadly neglected both United's propensity for self-destruction and the adverse effect of Mick 'Zico' Martin's pre-Christmas injury on the centre of their midfield. 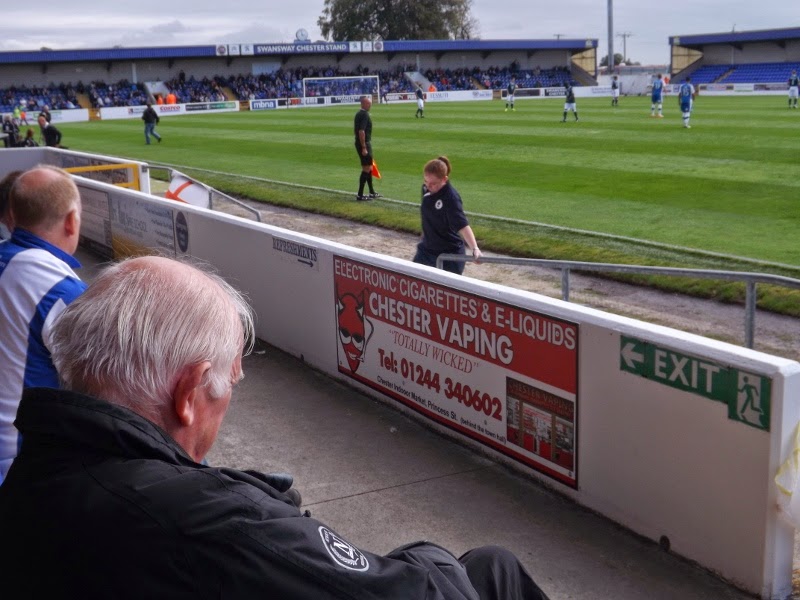 There were 25,000 people at St James' Park on third round day, most expecting the second division leaders to tramp all over their Division Three opponents. Instead it took only three minutes for Peter Henderson to give Chester the lead; with a quarter of an hour to play a gawky teenager from Flintshire ran through to score a second. "I'll never forget the noise, the bustle, the excitement as we neared the ground.  I'd never seen that many people at a game before and it was incredible.  It was the most amazing day of my life up to then," Ian Rush recalled in an interview he gave three decades, almost 400 goals and 15  major honours later.

While Rush went on to bigger things, McGarry's team disintegrated, winning only once more in the league as they plummeted from four points clear in January to ninth at the start of May.  Sunderland were promoted, McGarry sacked and Peter Withe departed for Aston Villa, where he swiftly won a league title, England caps and the European Cup while his former side were exiting the FA Cup to Exeter City and committing to "stringent economies wherever possible". 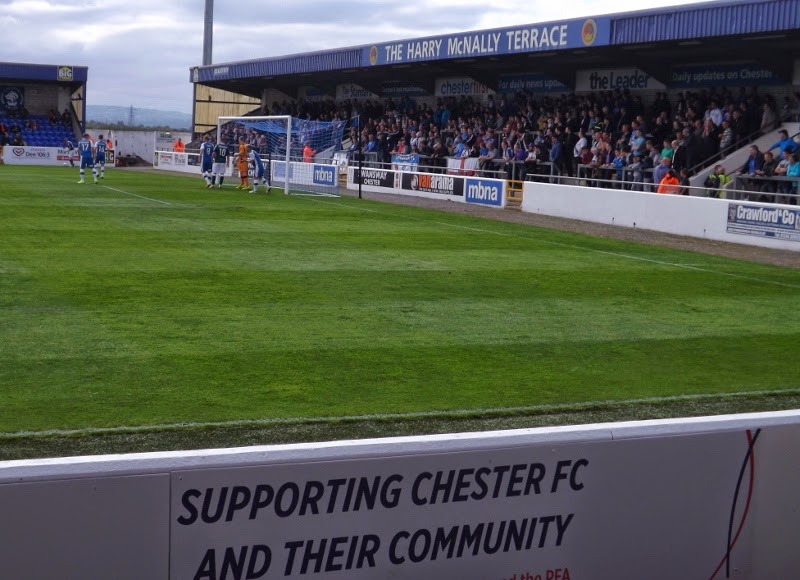 And then he arrived.  "Keegan! We've signed Kevin Keegan!" my dad announced through an all-day massive grin.  It was a coup made possible by the club's first ever sponsorship deal - Scottish and Newcastle Breweries stumping up for a promotional job which heavily supplemented the England captain's wages - and the continued inability of the club to make it back into the top flight.  "I need a new challenge and I think I'll find it here," said Keegan after rebuffing Manchester United and 30 other clubs.  Had Newcastle not been in the post-Chester doldrums, we would almost certainly have figured as number 31.  It rests entirely on a work of childhood supposition, but Chester City gave me Kevin Keegan; I've always remained grateful to those eleven men in blue.

Non-League Day and a late-summer job at the city's university seemed the perfect opportunity to pay them back.  A noon meeting with Chester fanzine editor Richard Bellis revealed a plethora of watering holes - the Brewery Tap on Lower Bridge Street my personal favourite - and a dearth of pre-match optimism.  "We've let in eight goals in our first two games.  Don't expect to be entertained." 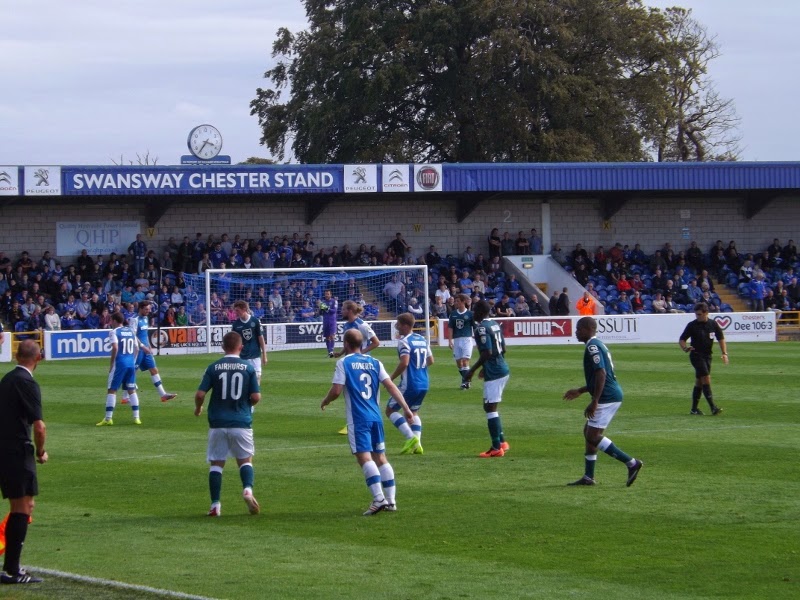 Relegated on the final afternoon of last season, reprieved in the summer and with one of the smallest budgets in the division,  Chester's goal for this season is merely to survive.  "I think we'll get smashed today," the middle-aged man behind me says.  "Look at him," his neighbour replies. "He's not aware of what's going on around him. When he brings the ball forward, he always makes the wrong choice."  "We are CFC, we're the blue army," crescendo the Harry McNally Terrace.  From somewhere behind: "He's not a right-back but then our other right-backs are crap."

Chris Iwelumo - "of international miss fame" - starts and remains on the bench for Chester, leaving John Rooney the most recognisable face on show.  Wayne's brother bustles about like an aggrieved bull but is sloppy in possession, compensating for the number of time he loses the ball by the one time he strikes it into the net.  His goal comes in the 13th minute, a free-kick smacked unerringly round the wall and into the corner of the Macclesfield goal. "That was good!" says Neil Bellis, the intonation reflecting his surprise.  "If you're going to wait three games to score at home, it might as well be one like that."

The pessimism in the stands leaves me expecting a Macclesfield counterstrike that never really materialises.  They create one chance - Joe Worsnop springing at the feet of Arthur Gnahoua with the striker poised to score - and have another gifted immediately afterwards, but it's Chester who come closest to another goal, Rooney's cross eluding both Kingsley James's head and the Macclesfield net by no more than two inches. 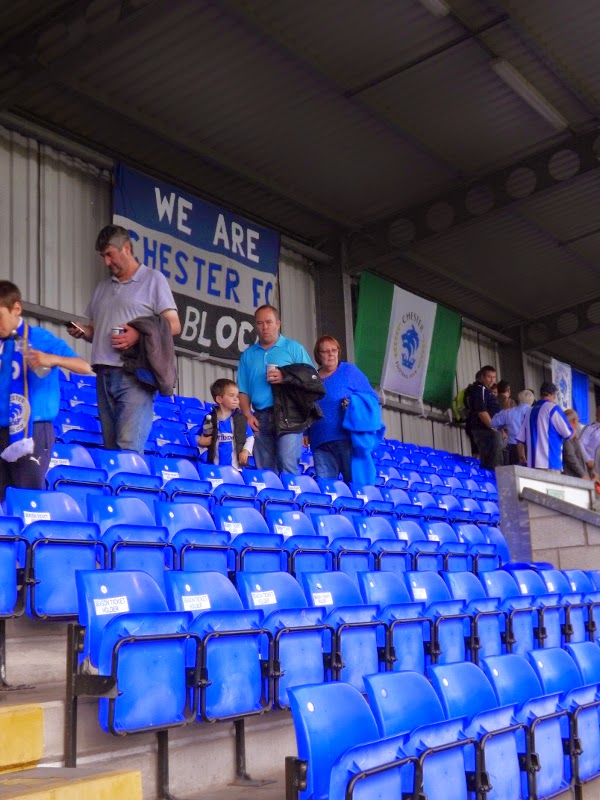 Half-time conversation centres on the quality of matchday catering, the likelihood of Macclesfield scoring twice in two minutes towards the end of the game, and the qualities of the Deva Stadium. "A tidy little ground," one visitor thought.  "The first to meet the specifications of the Taylor Report," Neil Bellis tells me, "and it might be the only one to straddle a border."  The club offices, behind me, are in England, the pitch and three of the stands in Wales, though cross-border fraternity is in short supply on the Harry McNally, an increasing number of their songs referencing Wrexham in terms which are significantly less than complimentary.

The travelling Macclefield contingent, in contrast, have very little to get excited about, Chester's defence restricting their attack to a few half-chances.  When they do get through - a striker stumbling, turning and finally shooting towards goal - Worsnop flings himself full-length to beat the strike away. "What a save!" someone shouts. "Complete fluke."

The whistle blows after a nervy four minutes of added-on time, James - built like a Roman legionnaire - celebrates with a leap, and 2,500 relieved fans file out of the ground and into the surrounding industrial estate.  "Really pleased with that," says Richard Bellis as we head back to the station. "Yes, really pleased."