"It was," they reckoned, "the finest team Hexham had ever seen."  The near invincible Hearts side of 1946-47 won 25 and drew six of 34 league games, playing 11 times in eight days as they pipped Newcastle United 'A' to the Northern Alliance championship by a single point.

Formed only three years previously, Hexham Hearts had played in the Ryton & District League before moving upwards to the Alliance, their side stacked with talent from front to back. Goalkeeper Maurice Edgar and inside right Steve Howdon had played wartime football for Newcastle United,  Bob Batey was in the winning side in the first televised FA Cup final, Walter Atkinson would be taken on by Norwich City, while Sunderland, Bury and Darlington had all cast admiring glances at midfielder Norman Menzies only to be deterred by the £1,000 fee the Tynedale club demanded for the move. 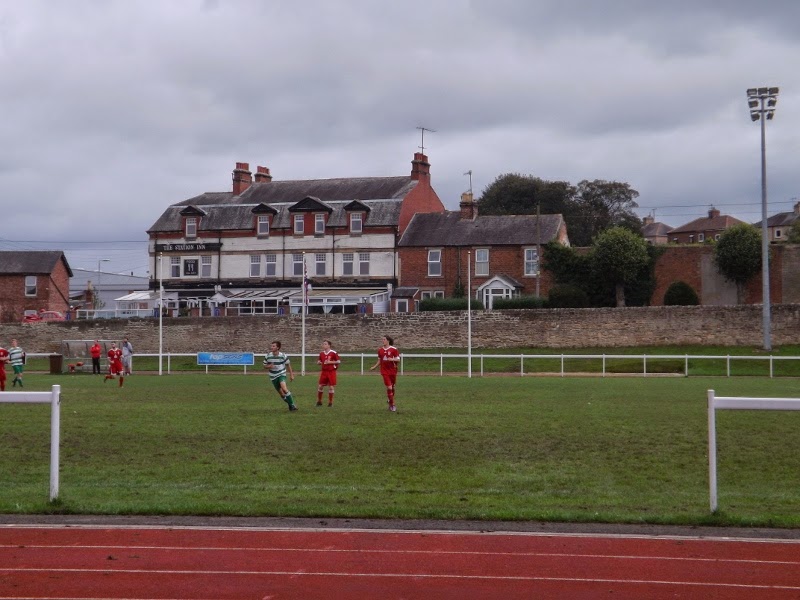 In the same era that Second Division Newcastle United smashed records as Britain's best supported team - their average attendance of 56,299 in 1947-8 only narrowly overtaken by Manchester United in the year the Old Trafford club won the European Cup - Hearts regularly drew four-figure crowds to their Tyne Mills ground.  In 1949, 4,000 watched an Aged Miners Cup win at Ashington, 14,000 turning out at St James' Park when Howdon's hat-trick beat Blyth Spartans in the Northumberland Senior Cup final.  Five seasons later, 2,000 were present at Hexham to see Hearts - conquerors of Cramlington, Alnwick Town and Newburn - play Horden Colliery Welfare for a place in the first round proper of the 1953-54 FA Cup.  They lost 2-0 in a replay and would never come close again.

League success and supporters were both dribbling away, gate receipts down to "a few shillings" when Hearts dropped out of the Alliance in 1956.  In 1960, they went out of existence, their committee down to the last three men. "The players we had our eyes on have gone elsewhere," lamented secretary W. Hepplewhite, "and I cannot see the club starting up again." 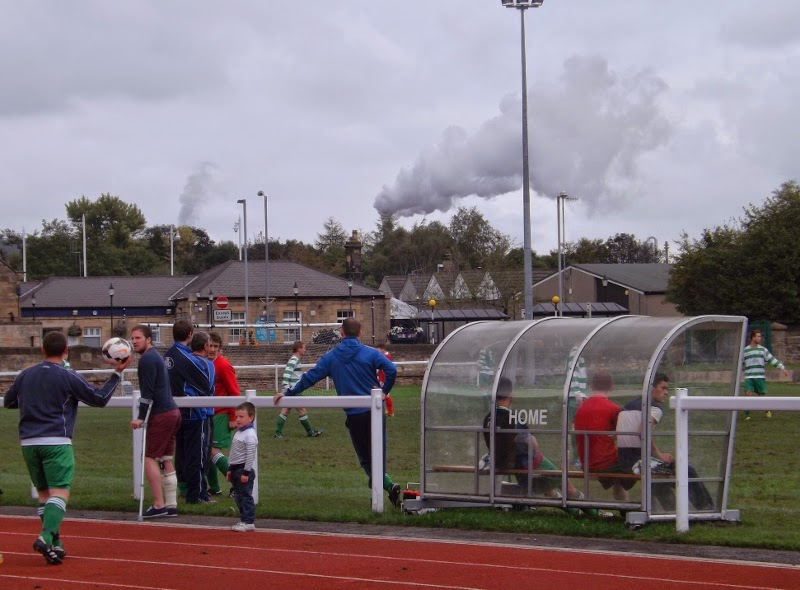 My bus trundles west out of Newcastle and into the old Reiver lands. 'Welcome to England's Border Country' reads a sign in front of aged miners' cottages in Heddon-on-the-Wall; a burger van on the A69 has a St George's Cross flapping either side of the serving hatch.  "I'd have let them go, me," a woman says, effortlessly switching between TV talk and the Scottish referendum.  "They'd soon stop complaining when they have to pay their own way." "I don't know," her friend says less truculently.  "I wish they'd have gone and taken us with them." Their conversation brings back memories of my grandad, who went from the Normandy landings to United Buses.  "The north-east's biggest problem," he used to say, "is that England doesn't need us and Scotland doesn't want us."

Through Ovingham and Corbridge - birthplace of Steve Bruce and, incongruous as it therefore may seem, once labelled "the snobbiest village in Britain" - to Hexham, a prosperous market town with an Anglo-Saxon abbey and a football pitch tucked between a Waitrose, a swimming pool and its railway station.  Nowadays only Hearts' green-and-white hoops remain, sported by a neoteric Northern Alliance side that has its origins in the 2002 merger of two junior teams, and whose 2011-12 Second Division title success was the first in the town since their long-defunct predecessors packed up half a century before. 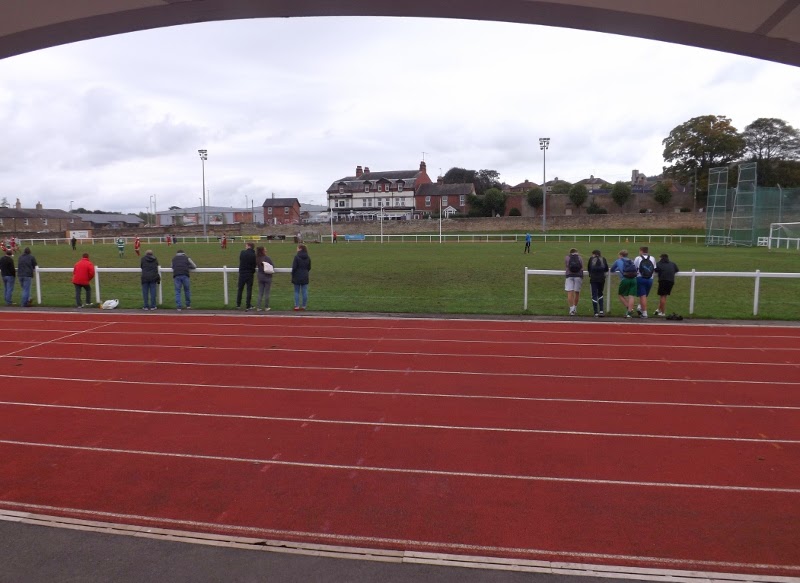 This afternoon's Bay Plastics Combination Cup visitors are Bedlington Terriers Reserves.  There's a crowd of twelve, the picnic benches left unattended but an elderly couple occupying two of the blue plastic seats. "A Stanley knife went in sideways," one of the spectators says.  "Ah rammed it in, pulled it oot.  Mind, me hand was sopping by the time wu got to Kwik Fit." There's a respectful silence. "First ten minutes, stay alive," yells a Bedlington centre-half.

"Hoy another ball on.  That one's shit," Hexham's keeper grumbles to the dug-out. "There's nowt the matter with it, man," comes the indignant reply. "It's just been blown up."  His opposite number has a voice as sonorous as a newspaper seller.  "Work," he rasps.  "Keep yer shape." Midway through the half he clutches a header from the Hexham number 11 that's vaguely reminiscent of Alan Shearer's against Germany in Charleroi. "Tremendous!" admires the Terriers left back. "Divvent push it. If there's nothing on, gan back," Hexham's coach tells his team at the break. 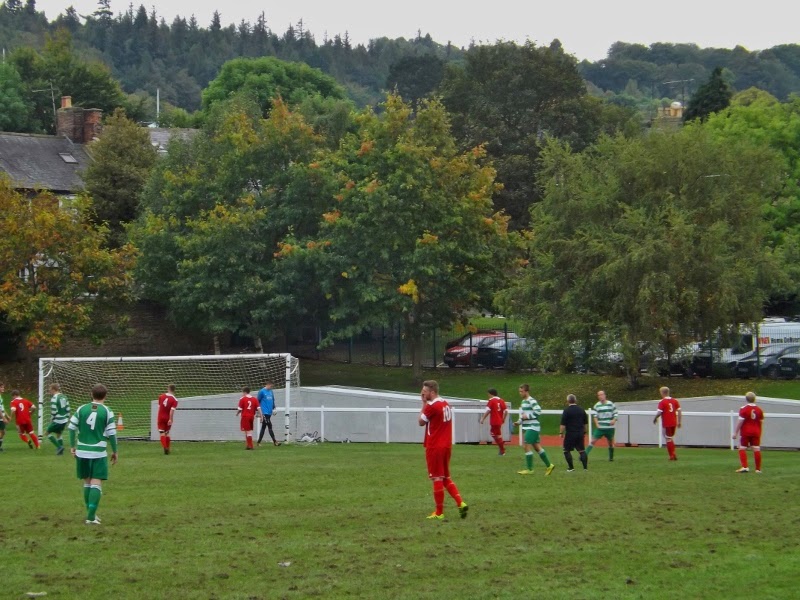 In the end, it's not as if they have any choice.  We've barely kicked off when Bedlington's burly number 10 heads down into the clarts, accelerates through a gap and toe-pokes under the goalkeeper for the game's opening goal. The number 9 sweeps a second home with the side of his foot, the third comes when the keeper flaps at a corner and 11 nods in at the post. "Howay lads, keep yer legs moving," claps a Hexham centre-half.

The fourth is scored by number 5, jabbing home from six yards; the fifth comes when number 8 feints, steps over and then delicately curls the ball into the top corner, the sixth when the goalkeeper parries in the direction of yet another red shirt. "Got to be off," groans a home defender.  The linesman - a Hexham substitute - looks up at the sky and shakes his head.  Right on the whistle, number 5 scores again, running off laughing as his teammates turn back towards halfway.  "Seven-nil," mutters a spectator, wrapping his tongue around each syllable.  "Seven bloody nil."