It's the last weekend of October, 23 degrees and still shirtsleeves weather in Kichijoji, where I've come to escape the madding crowds of city centre Tokyo and watch Japan Football League high-flyers Yogokawa Musashino play MIO Biwako Shiga, near-namesakes of a team I'd seen walloping all-comers on a daytrip from Kyoto in 2011. While Musashino, formed in 1939 as the club side of Yokogawa Electric Corp, don't have much to show for seven decades of history besides a smattering of prefectural honours and a handful of youth team graduates - notably ex-Japan and Southampton striker Tadanari Lee - Kichijoji is one of the capital's hippest suburban hang-outs; I pass Dutch flowermarkets, Italian trattorias, German bakeries, a faux-Thai backpacker cafe, university campus and, finally and confusingly, two floors of a leisure centre before exiting at the entrance to the ground. 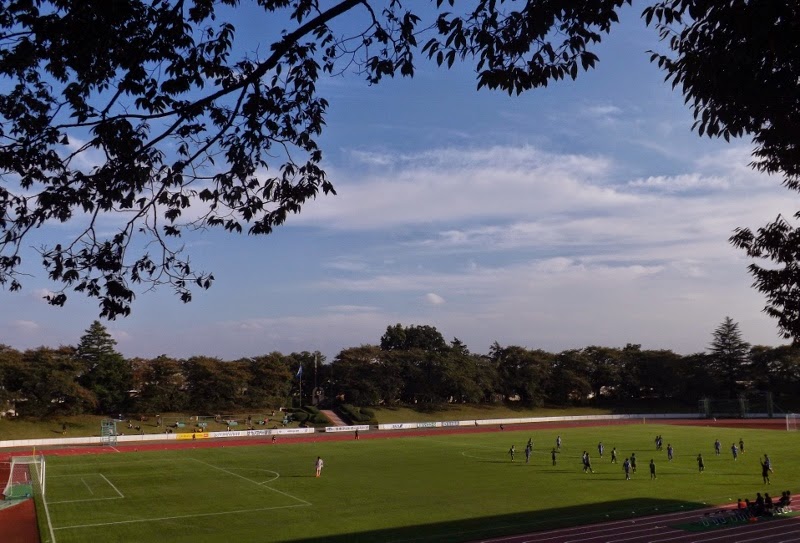 In the typical display of synchronised efficiency, one person takes my 1,000 yen, another simultaneously hands out a free photocopied programme sheet and a third, with a bow, a flyer for a women's game before I'm through into a concourse with merchandise stands, food concessions, volunteer sellers carrying alcohol down to the terraces in boxes, and a Brazilian restaurant stall flogging ice cold lager and meat-on-sticks.  A few dozen spectators sprawl across a grass bank opposite the only stand, which is around half full, shaded by a metal roof and overhanging trees and awash with the noise of the Boys Musashino being comprehensively outsung by six Shiga fans. The visitors break off in a collective shriek as a Musashino shot spins backwards off the keeper's hand, cheer the agricultural clearance which prevents a goal, then pick up with a chant that sounds so disconcertingly like a paean to Newcastle United's Gabriel Obertan that I almost splutter my beer. 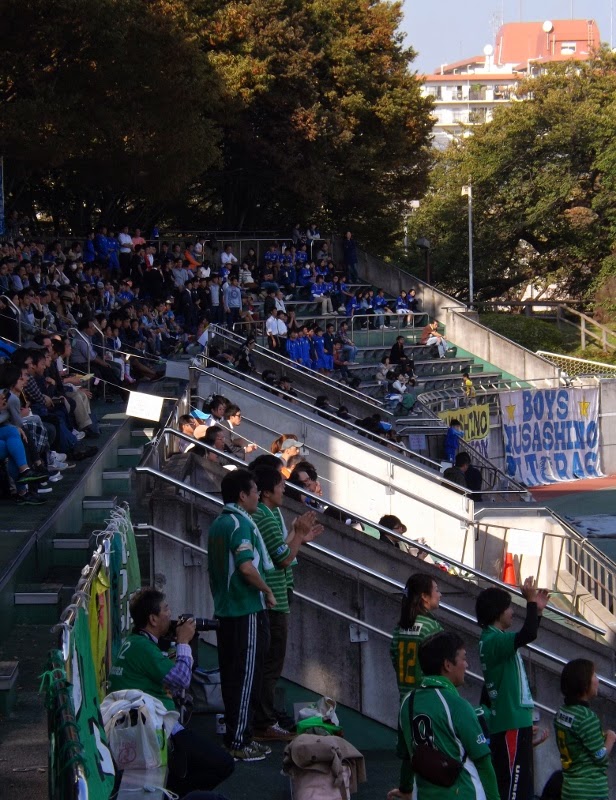 Rhythmic clapping and the drone of a helicopter soundtrack most of the half, Shiga probing intelligently down the sides of the pitch while Musashino storm and bully their way through the centre. It's not much of a surprise when the visitors take the lead,  Tatsuya Saito played through, drawing the keeper and sending the celebrating Shiga fans into choruses of Go West and When Skies Are Grey.  Ever polite, the substitutes line-up to clap the starters off the pitch at the interval, two ranks of cheerleaders breaking out into an acrobatics routine which ends in a human pyramid and the closing bars of the theme from Sesame Street. 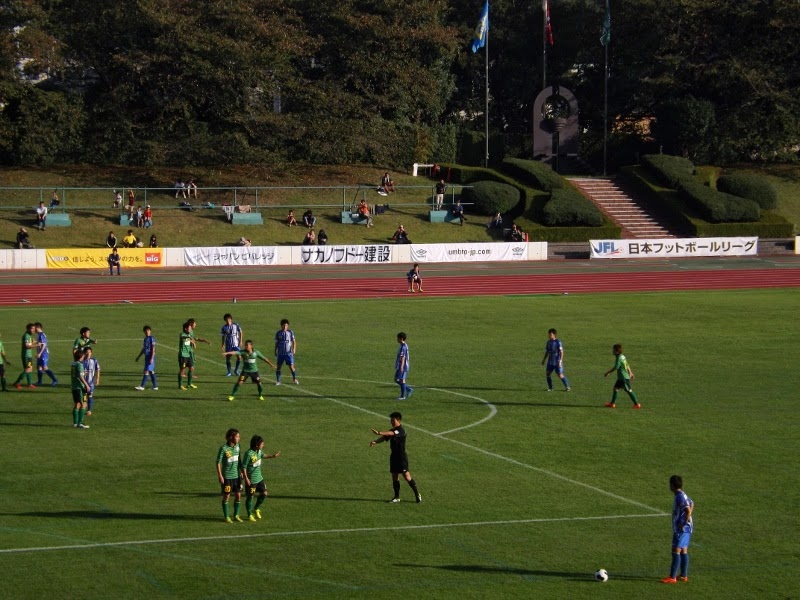 Whatever they were listening to inside the changing rooms, Musashino - beaten only once in ten league games but without a home win since March - come back out reinvigorated, levelling the scores when a set-piece is only cleared as far as half-time replacement Daisuke Eiro.   The home support bounce up and down a bit, briefly return their attention to cup noodles and smartphones, and then start bawling out 'Musashino' as the previously unruffled Shiga defence starts gifting up chances.  Blue shirts swarm around the goalmouth but studs and shots miss by inches and the game soon drifts towards torpor despite the boisterous efforts of the Shiga fans, who attempt to rouse their team's attacking intent with bursts of Twisted Sister's We're Not Gonna Take It Anymore. 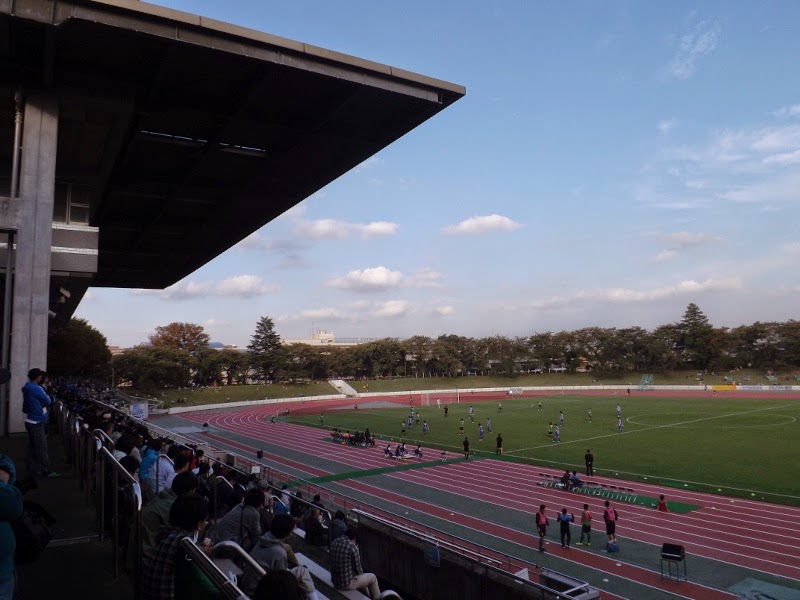 There are nine minutes left when a harmless ball down the left is centred along the ground and flicked in by Tsuyoshi Kaneko, the third of Musashino's second-half substitutions. Kaneko's marker looks at the goalkeeper, the goalkeeper looks back at him.  Musashino flags twirl in the windless air.  The stunned away fans, defiant to the last, launch into Popeye the Sailor Man. 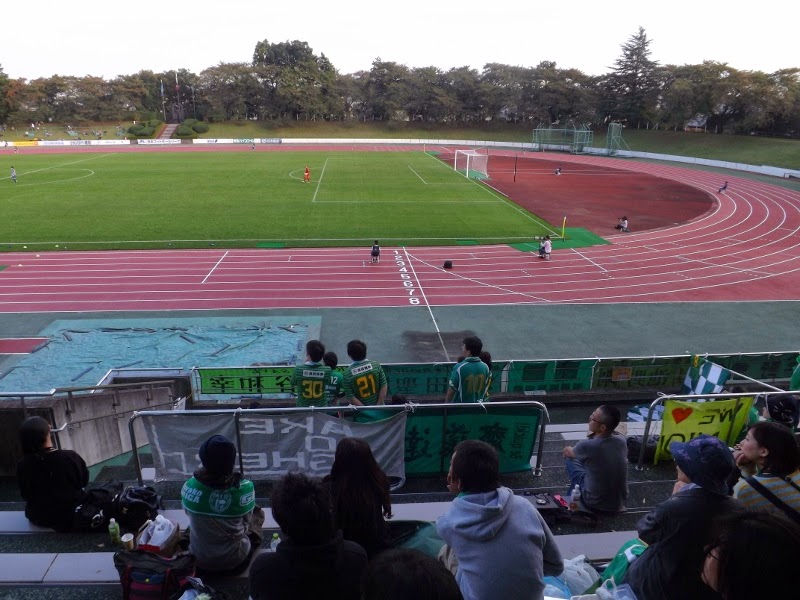