A holiday weekend, 16 qualifiers representing ten regional associations, four pitches - three inside the 1964 Olympic Park - two time slots per day, a £3 souvenir programme and free entry to the matches themselves.  There's no Wembley final, two-legged tussles, midwinter postponements or complaints about the dominance of the Northern League, but this is as close as Japanese football comes to the English FA Vase. 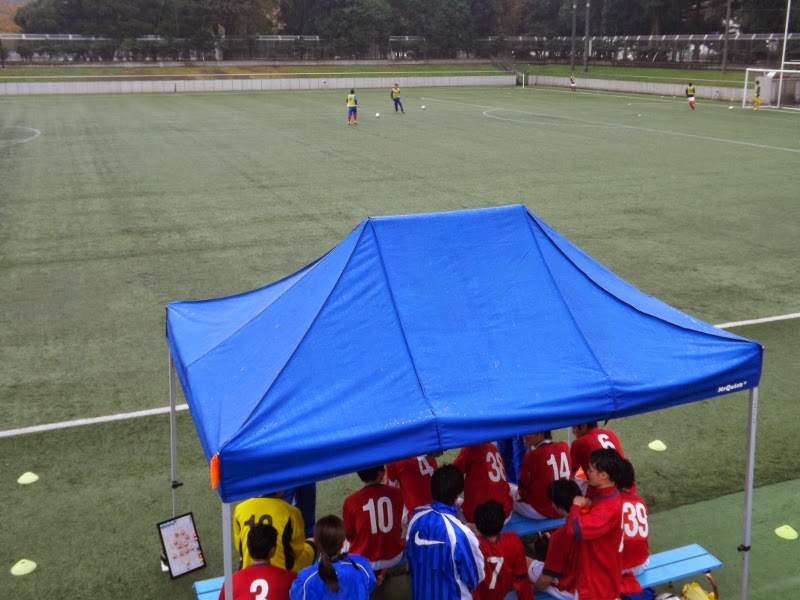 My tournament began on finals weekend at a rainy Komazawa Park, three stops from Shibuya and formerly host to a Tokugawa shogun, US Army officers' club, the 3rd Asian Games, the 1964 Summer Olympics and the 2014 Tokyo Ramen Show. Originally picked as the main site for the cancelled 1940 games, the park served as the city's second venue 24 years later and is now a public space with baseball, softball and athletics venues, a memorial museum, bike rental, concrete Jenga tower, cherry trees,  a dog run, outdoor swimming pool and leafy jogging trail, "causing inconvenience to others" and "counter-clockwise runners" prominent among the list of impermissible acts. 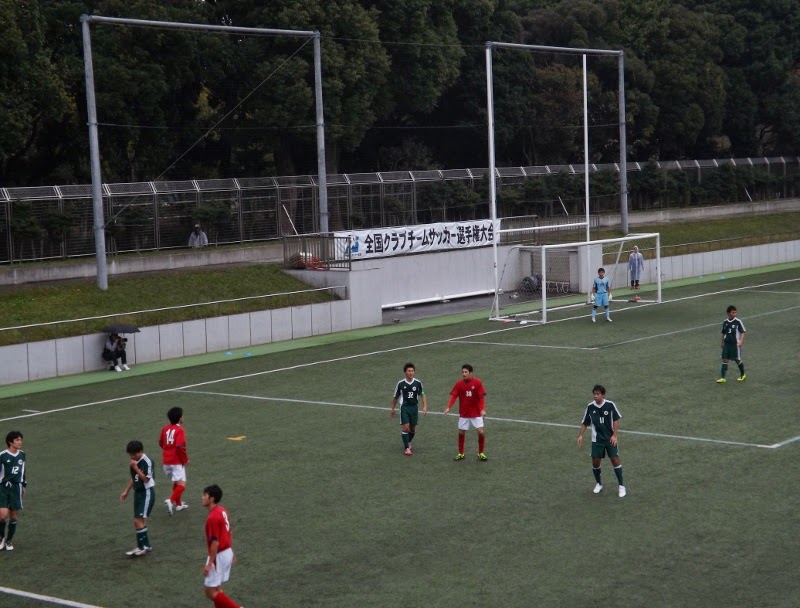 The first round pitched local favourites and two-time Japan Youth Cup winners Mitsubishi Yowa against a side of Kagoshima University graduates on the Number 2 Ball Sports Ground.  First used for field hockey in 1964, it has one stand, a scoreboard and trees blocking the view of the neighbouring pitch, where Osaka's Kandai Club 2010 were dismantling a team from Shizuoka.  One photographer and a huddle of 50 or so umbrellas are in attendance, a solitary travelling fan tying a flag above the rain-spattered bench seats as the two sides shelter in gazebos. 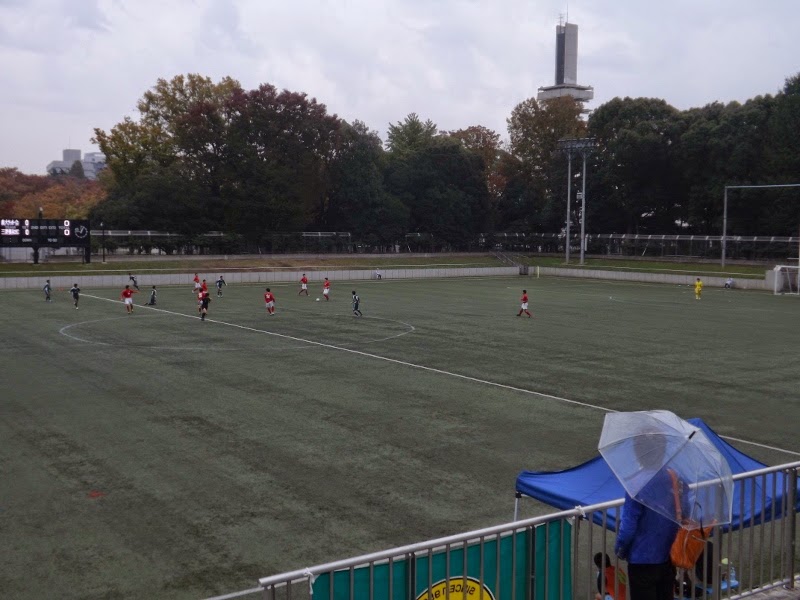 While the players come from opposite ends of the country, the style of football is common to all: played at a zip with brittle defences, little pressure in midfield and lots of neat-and-tidy passing which tends to fizzle out when it comes anywhere near the goal.  Mitsubishi work the game's first opening, eliciting a fisted save and a strangulated cry from a spectator sporting headwear shaped like a birthday cake and a t-shirt which reads, in mellifluous gibberish, 'Too Much Loud Could Says All the Candies All the Time.' He's even less happy when Kagoshima ruffle the net, two lofted corners causing all kinds of consternation in the Mitsubishi defence before an outstretched boot stabs a loose ball past the scrambling keeper and a posse of falling bodies on the line.  The lead lasts all of a minute before a soft free kick trickles into an unguarded corner of the Kyushu side's goal, a hat topped with red-and-white striped candles tossed exultantly into the air. 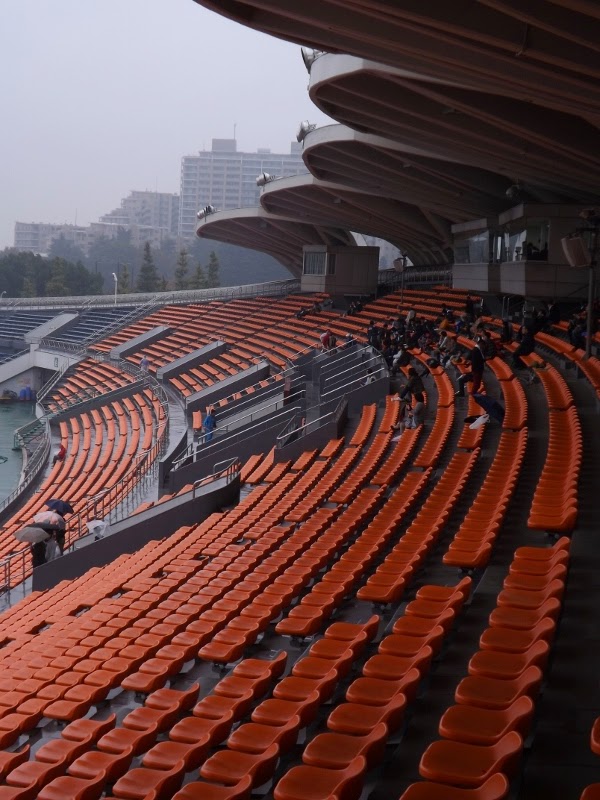 Both teams come bounding back out from half-time teamtalks in their respective gazebos, some adroit twisting and turning by a corner flag earning Mistubishi a second goal when the subsequent cross is headed through the goalkeeper's hands.  As he hunches Mannone-like hurling insults at his gloves, Kagoshima break quickly upfield and level the scores.  Yowa have a penalty appeal waved away, a shot hacked off the line, an abysmal spot-kick easily saved and then sneak a winning goal in the final minute of extra-time.  The rain thunders down, and only the hardiest of counter-clockwise runners, a few dozen specatators shivering under brollies and the men from Mitsubishi survive. 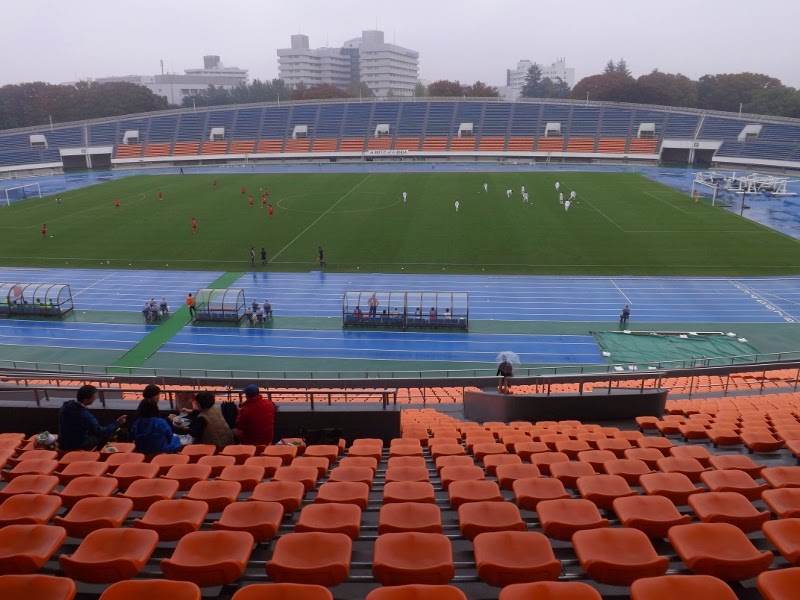 A couple of hundred metres away, past poncho-clad ramen sellers, military recruitment stands and a teenage girl band pogoing on a covered stage, a sparse crowd is gathered under the roof of Komazawa Athletics Field for the Derby della Diesel Engine, Yanmar Amagasaki of the Hyogo Prefectural League taking on Toyota Motor Hokkaido Soccer Club in a stadium with scant lighting, a blue running track and 20,000 largely empty seats. The stadium hosted seven football matches in 1964, two Emperor's Cup Finals and J-League side Tokyo Verdy, once home to Hulk and Ossie Ardiles; today, on a sodden grass pitch, both non-league teams are zinging the ball around confidently, Amagasaki scoring first when a forward zips through the centre of defence, easing the ball round the keeper as he comes sliding out.  Yanmar dominate, adding a second goal through a deflection before Toyota Motor get a respite from the penalty spot shortly after half-time.  Amagasaki reassert themselves, restoring the two-goal advantage after a defensive error, a drop of the shoulder and a clip off an ankle which sends the ball spiralling into the net. Toyota squeeze a second, a cross fortuitously spinning in between the goalkeeper and a post, and then equalise with five minutes left to play. Back come Yanmar, the ball arriving at the feet of a substitute and his instinctive daisycutter bending into the net.  Game over I think, making my way down the empty orange-and-blue rows to the exit.  But then Toyota get a second penalty and calmly despatch it into the space vacated by the Yanmar goalkeeper's dive. 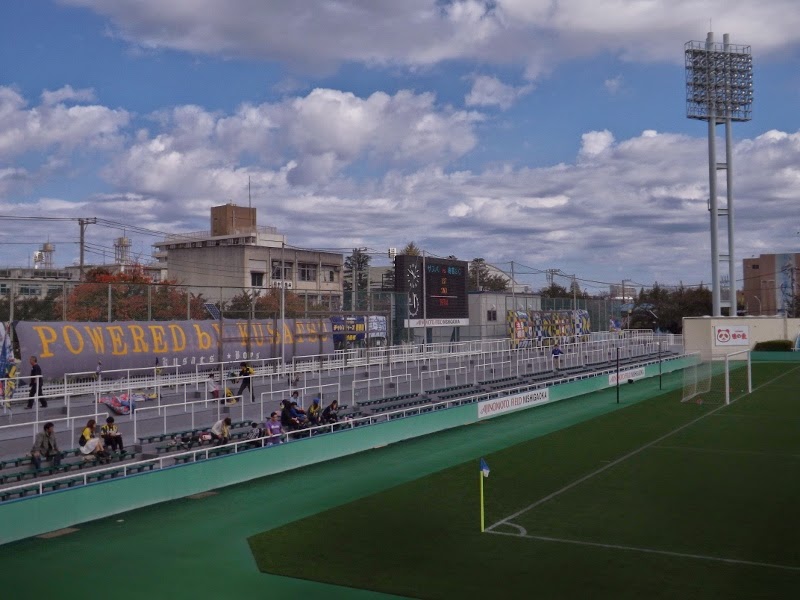 The first half of extra time is uneventful, the second even more so until two atempts are frantically cleared off the line and a third is headed in.  The Amagasaki scorer celebrates like he's just won the tournament; Toyota don't respond.  Two games, two grounds and fourteen goals isn't a bad return for a rainy Saturday. 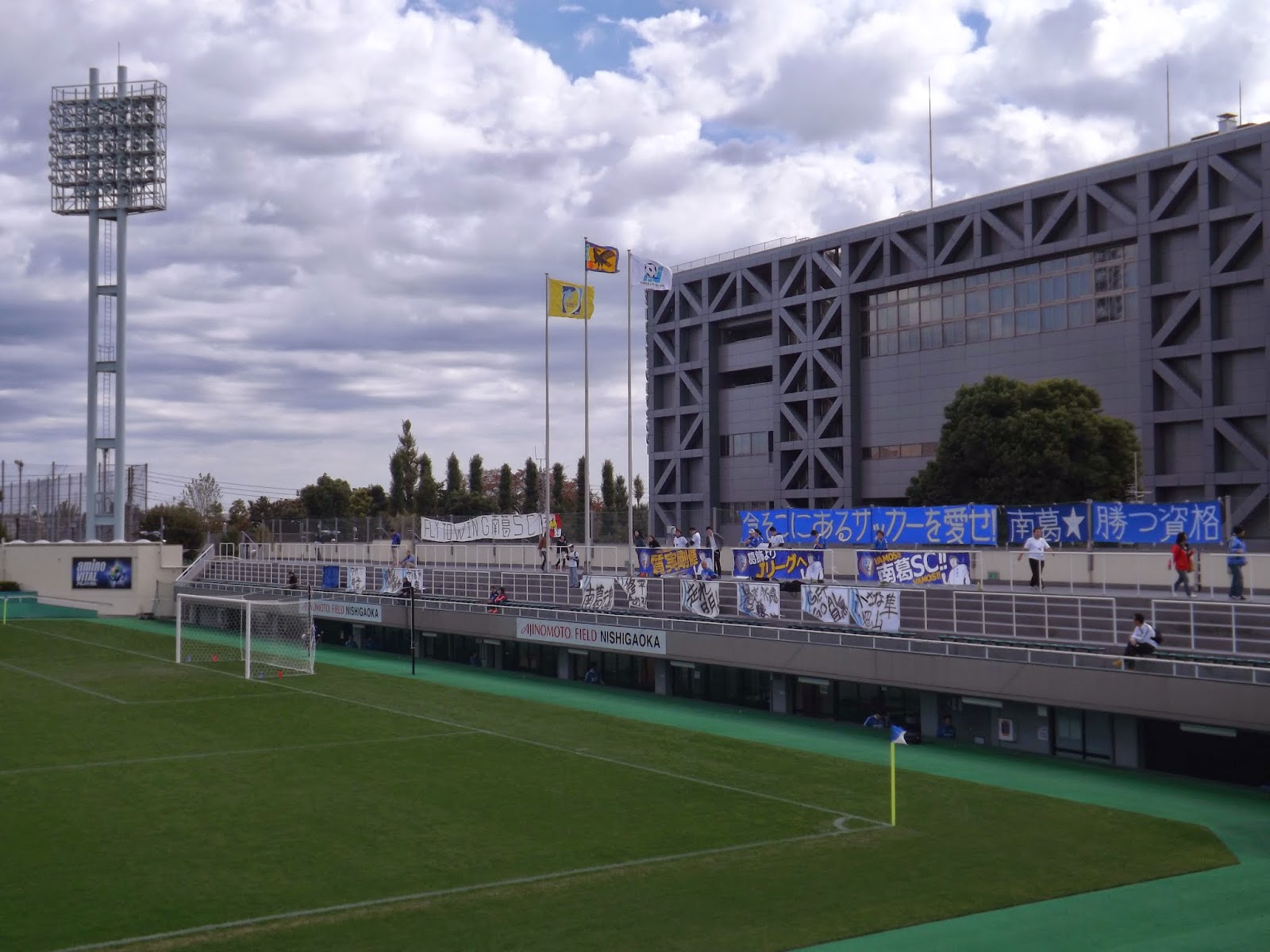 Forty-eight hours later I'm on the other side of Tokyo for the first semi-final at Nishigaoka Stadium.  Built six years after the Tokyo Olympics, the football-only ground is managed by the Japan Institute of Sports Sciences and was previously home to FC Tokyo as well as the venue for some of Tokyo Verdy's peripatetic wanderings around the capital city, though its capacity falls just shy of the 10,000 seats required for permanent J.League membership. Not that anywhere near that number are needed today, a few hundred neutrals, fifty odd Nankatsu SC and a dozen or so Thespa Kusatsu Challengers fans comprising the crowd for the 11am start.  Affiliated to a J2 side, the Challengers are the tournament favourites, scoring seven times in dispensing with Nagoya's AS Kariya and then Yanmar Amagasaki on the previous two days.  Nankatsu, who I'd seen just over a week earlier narrowly failing to earn promotion from the ninth-tier Tokyo Senior League Division Three, have eliminated Kyushu's Kashima SC and Tokyo division two side Ome FC.  "Fly to Wings", "Vamos SC!" and "Get Goal" urge the banners pinned behind their goal. "Powered By Kusatsu" is slung across the opposite end, where the travelling contingent have gathered with a bass drum and flags.  The underdogs fire one effort past the post and force the Kusatsu keeper into a scrambling save, but tire late on as Kusatsu clatter the post, scoop a penalty horribly high and wide, and then force the ball over the line in a goalmouth melee, the whole team rushing behind the goal to celebrate with their fans.  The beaten side have only a third-placed certificate - shared with Mitsubishi Yowa, who were beaten 2-1 by Kandai 2010 in a game played immediately after Nankatsu depart the pitch - and the acclaim of the opposition support to show at the end of a season of near misses.  "We didn't achieve our target," apologises a club official, "but we've taken an important step towards it." 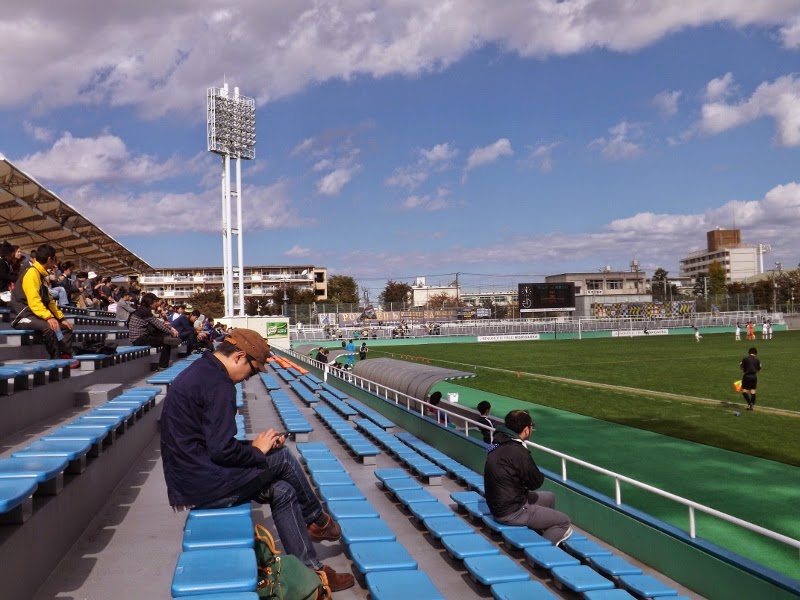 The following day, I'm back at work as Thespa defeat Kandai in an afternoon kick-off watched by 162 at Komazawa Athletics Field. It's not quite Wembley - even for a Vase Final - but Kusatsu don't mind a bit. 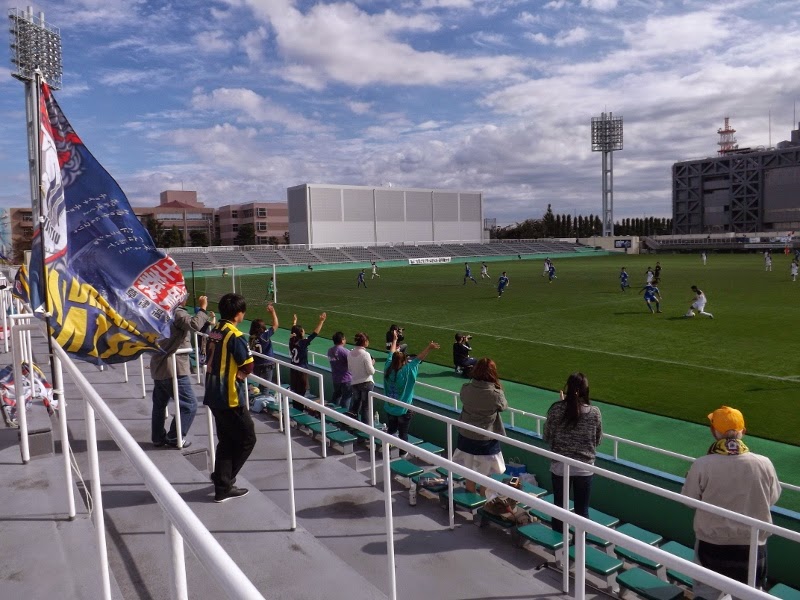