Aged 11 when the series began in 1981 and still a Roy Raceish 21 three decades later, Tsubasa was brought up in Nankatsu City, where he played in all-star elementary and middle school teams and harboured dreams of becoming the greatest footballer in the world.  His adventures, first serialised in the Weekly Shōnen Jump magazine, have been followed avidly by hundreds of millions on TV and game consoles; in his home country, Tsubasa's triumphs played "a crucial role in Japanese football's exponential growth from relative obscurity" in the early-1980s to World Cup host in 2002 and, to the eventual detriment of the national team, inspired a whole generation to become attacking midfielders.

The fictional Nankatsu was based on the real-life eastern Tokyo ward of Katsushika, home to Yōichi Takahashi, a baseball fan and manga artist who'd become interested in football while watching televised games from the 1978 World Cup.  "I did some research into soccer and learned that in Europe it was far more popular than baseball.  Soccer was the world's number one sport. I was hoping I could share the excitement of what I had witnessed on television through my drawings and in so doing hope that football would become more popular here in Japan".  At first Takahashi had to educate and not just entertain his readers: "Even 'World Cup' was an unfamiliar term so I had to explain in Captain Tsubasa that it was such and such an event, that it's the world's greatest tournament, held every four years". 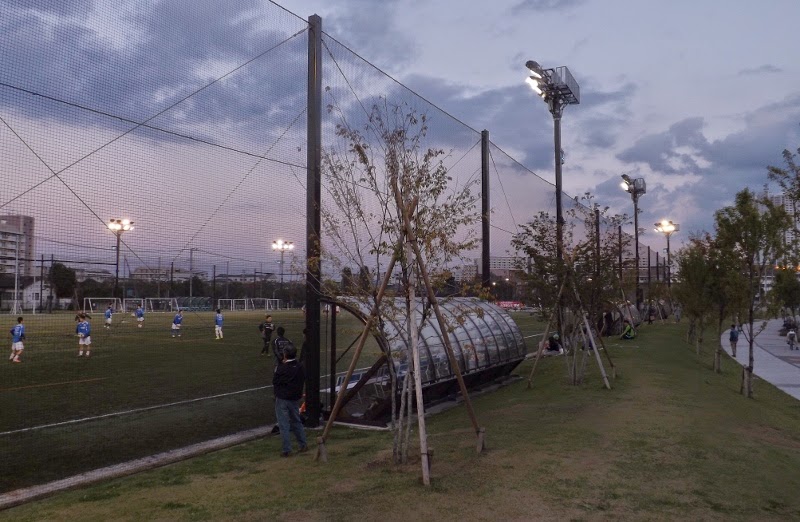 In the following three decades, Tsubasa has guided Japan to World Youth Cup and Olympic-qualifying success, pioneered the flying drive shoot, clip jump and heel lift cyclone kicks, lost only a single game in which he's played, moved to Sao Paulo and then Barcelona, where he was shunned by a coach modelled on on Louis van Gaal before netting three goals in a 6-5 win over Real Madrid, married his childhood sweetheart, and influenced the likes of Zidane, Messi, Hidetoshi Nakata, Alessandro Del Piero, Andrés Iniesta and Fernando Torres. "I remember when I was a kid....everyone in school was talking about this cartoon," the Chelsea striker said when he visited Japan for the 2012 World Club Championship.  "These two young players got into the national team then moved to Europe and played for Barcelona, so it was like a dream. I started playing football because of this." 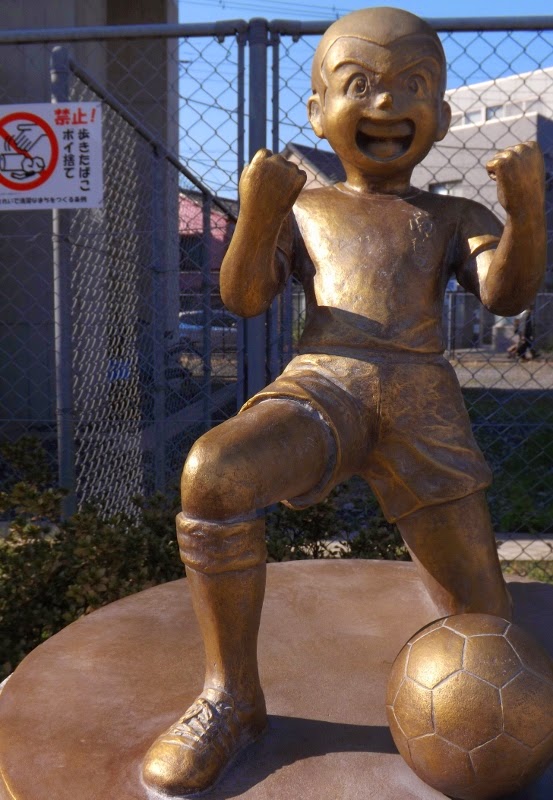 While Tsubasa and his contemporaries have long since departed Nankatsu, his creator still lives in suburban Katsushika, where seven bronze statues and an adult football team commemorate the place where Japan's greatest sporting export first honed his skills.  Formed in 2012 and swiftly renamed to mirror Tsubasa's all-conquering school team, Nankatsu SC currently play in the third division of the Tokyo Shakaijin Soccer League, six promotions off their goal of reaching J3, the lowest rung of Japan's nationwide professional league. 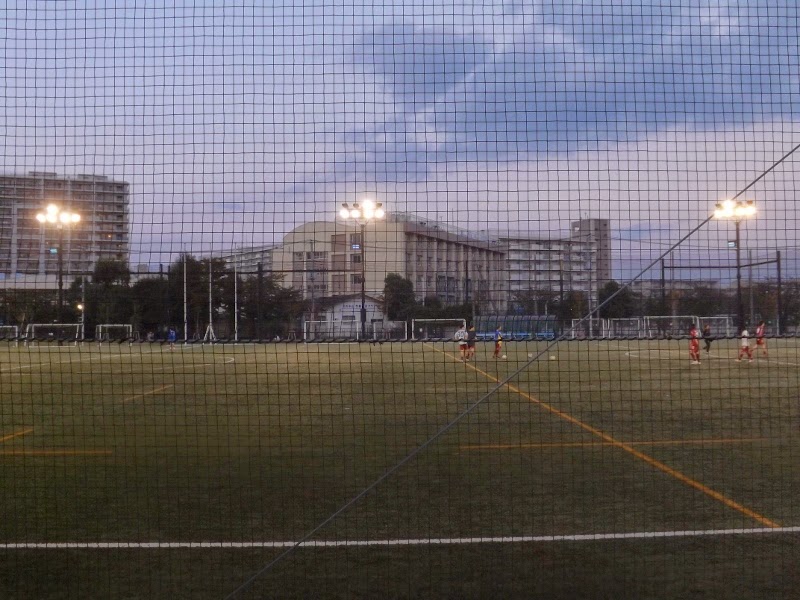 Behind the Wire: Niijuku Future Park


Seating at the Niijuku Future Park is in perspex dug-outs or a grass bank, the pitch fully enclosed by wire fencing and a solitary vending machine and smart new changing block behind one goal.  Nankatsu's pre-game preparation includes passing drills, shuttle runs, set-piece routines and an exhaustive series of sprints and stretches; their opponents, Jam FC, make do with half an hour of pinging a ball off the fence followed by a quick burst of attack v defence. Nankatsu finish off with a loud cheer, I'm handed a free match programme in a cellophane bag, and then, accompanied by the click, click, click of a cameraphone from the visiting bench, the first of the evening's double header gets promptly underway. The 100 or so spectators spread out picnic mats or unfold camping chairs, one practising his golf swing with an imaginary club while the nimble-footed Daiki Hatakeyama skips round two challenges and loops a cross which is redirected into the grip of the grateful Jam goalkeeper.  Moments later Hatakeyama skillfully pirouettes between his markers and chips to the far post, where the number nine is lurking to put Nankatsu ahead.  The lead's doubled from a rapid counter before Hatakeyama drifts into space and slams a cross into the top of the net for the third.  "Wooah!" yells an appreciative spectator between mouthfuls of Pocari Sweat, "Action!" claps the Nankatsu coach.   Jam head one back from a free-kick but Nankatsu smash in a fourth before Daisuke Takiguchi twice unpicks the defence to make the final score 6-1, the two teams shaking hands before walking over to bow to each bench. 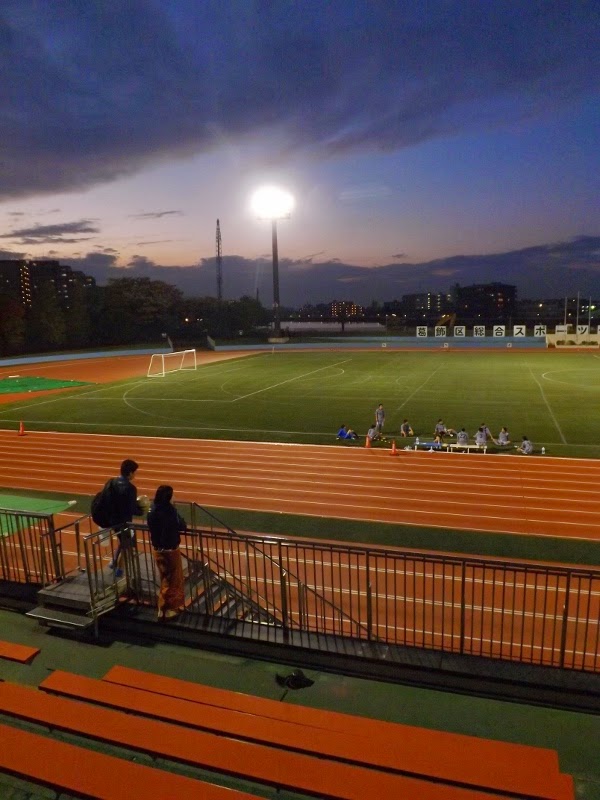 The following week I'm at Nankatsu's final league game of the season, the home side needing a series of results worthy of a Captain Tsubasa plot - a four goal win, the leaders to lose and the second-placed team to emerge pointless from their final two games - to snatch the only promotion place.  The game takes place on the opposite bank of the Nakagawa River,  a few hundred fans converging on the Katsushika Sports Centre's single stand. As the first game of the evening draws to a close, Nankatsu volunteers bustle about setting up sponsor logos, giant drums for the pre-match entertainment and a chalkboard on wheels to keep track of the score.  The club's players are every bit as busy, one goal disallowed and another blocked at the last by the goalkeeper's legs before the Recruit FC defence leave the number 34 alone from a corner to nod Nankatsu's opener with 15 minutes played. 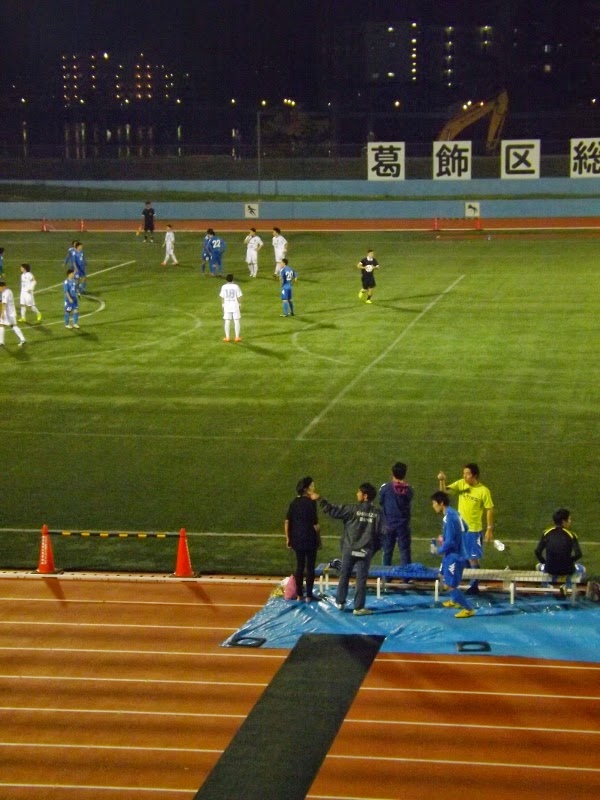 Nankatsu (in white) on the attack

Shota Meguro toepokes wide after managing to outsprint the keeper to a through ball, the number 18 cuts past three challenges but steers his shot the wrong side of the post, the tireless Meguro scoops wastefully over the crossbar and the Recruit keeper fists a free-kick away for a corner.  Time ticks on, Kazato Yamagishi smacks the ball against the keeper when sent through on goal, and the second doesn't come until the game's in its final minute.  By then, promotion is out of reach.

"Captain Tsubasa will keep going," Takashi recently told an interviewer.   So too Nankatsu SC, whose story has just begun.