Just a couple of weeks after the All-Japan Club Football Championships I'm back scurrying through the backstreets of the capital's north-west suburbs to catch the first round of the Tokyo Senior League Division Two Cup, in which Sperio Johoku - "Believe in the Dream! Run to J.League" - are hosting Elyse FCDX, a club whose name sounds a bit too much like a bad night out in a Roppongi nightclub. 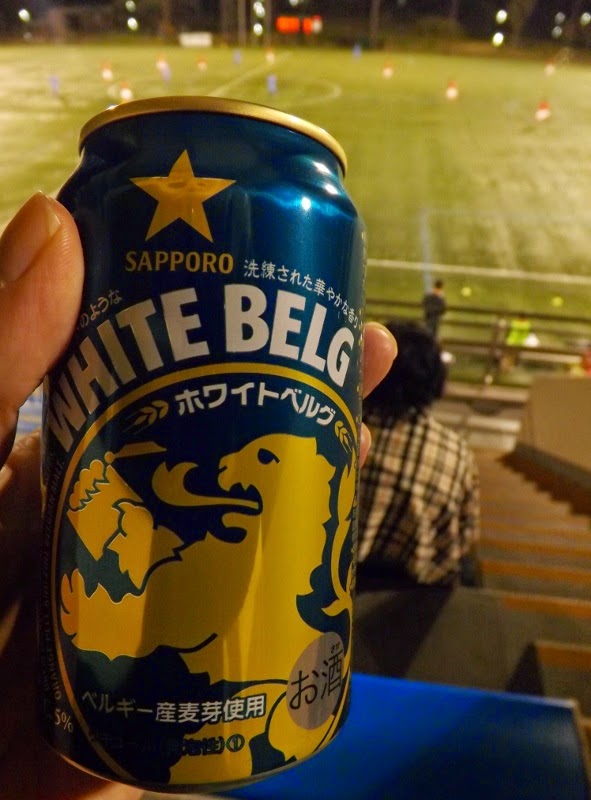 Sperio are about to celebrate their tenth anniversary of tilting at the J.League but have been caught five promotions short since 2009, their latest league season ending with 11 wins, two draws, 67 goals, a fully fledged ultras group and nothing a runners-up place behind Ome FC. 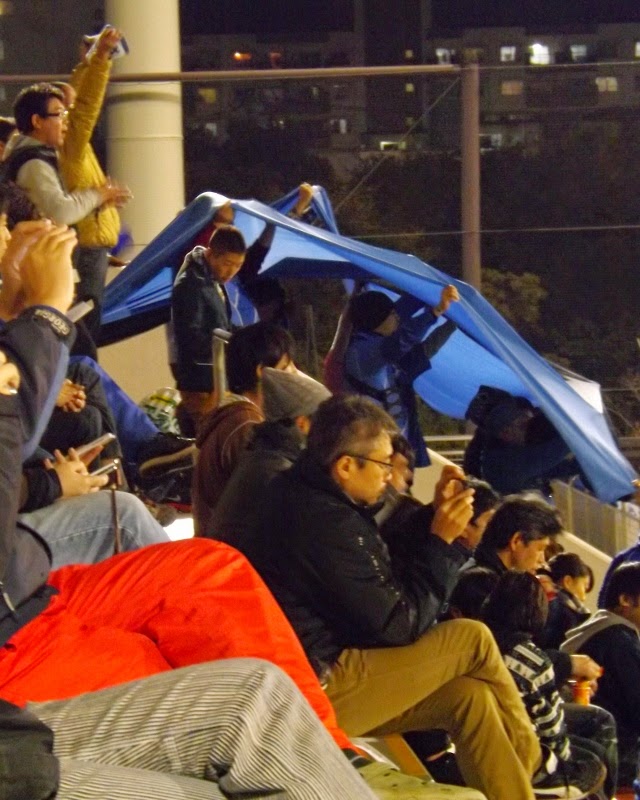 I arrive at the same time as the Zorro Azul, who are busily unpacking their banner displays and food bags; blue flags and bento boxes, canned coffee and synchronised chanting.  They cluster together in a corner of the 1,000-capacity stand, which faces out over an artificial pitch, landscaped forest trail and a pair of car parks.  "Sperio Johoku!" roars the leader through a megaphone, drawing four syllables out of the first word and shrinking the second down to two.  The two sets of players meet in the centre circle, shake hands and respectfully bow to the stand. "Ole! Ole!" the blue shirts answer, the din continuing unabated for the first five minutes then stopping abruptly, the megaphone downed and replaced, temporarily, by a suburban silence punctuated by traffic noise and the players' shouts.

The home team are all darting runs and flicked passes in the opposing half, but a bit less sure-footed when possession flows the other way. "Joh, Joh, Johoku," rumbles swiftly down the stand as a player bodyswerves an Elyse defender and backheels the ball away from a second. "Oh Sperio, come on Sperio."  The away side intercept,  advance, spread the play to an overlapping midfielder and smack a shot into the net. "Yaa-hoe," scream the visiting substitutes.  The Zorro Azul clap and stomp on regardless. 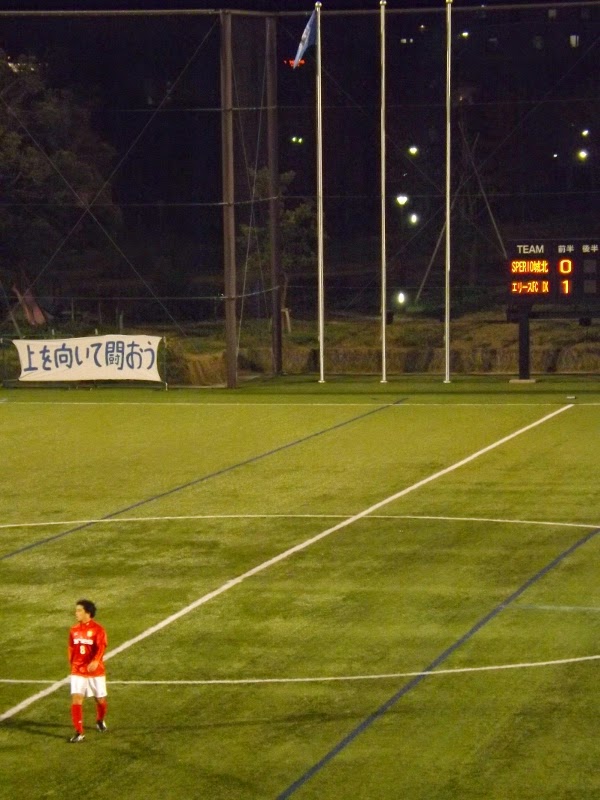 Neither the noise nor the home club's efforts to muster a goal let up,  the number 9, Nagasawa, slaloming through the area but stumbling as he shoots into bodies.  A second chance is stalled by the snap of a linesman's flag and a third goes begging when a player politely eases up enabling the keeper to collect a bouncing through ball, screams of "Clatter him" or "Get stuck in, man" conspicuously absent as the fans yell on with their support.

Two peeps signal the close of the eight-minute interval, Sperio first back off the touchline as Elyse huddle in a group.  Johoku's number 10 hits the post with a free kick, the Elyse keeper makes a springing save and Nagasawa lofts another half chance into a wire fence.  At the other end, Elyse almost turn in a second but have to settle for a corner which travels all the way across the six-yard-line, meets Hiroshi Kumagai's forehead and bounces into the goal.  The away side celebrate en masse with some Bebeto-inspired arm swinging by the corner flag; Sperio's fans refuse to acknowledge the blow, pogoing with their flags and scarves at the other end of the stand. 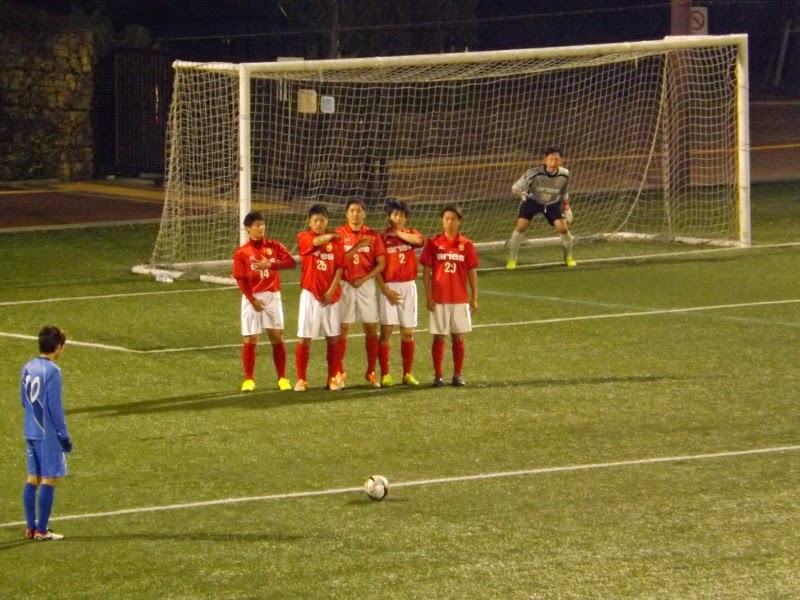 Johoku keep pressing but Elyse largely keep control, Nagasawa drawing appreciative nods from a scout and a save from the keeper after evading a pair of tackles but the away side otherwise restricting the blue shirts to potshots from range.  Off the pitch, only a double substitution quietens the home fans, the corner hushed while the referee checks off the names.   And then, with just three minutes left, a hopeful forward ball sees a Johoku player drift off his inattentive marker and almost apologetically nod into the net.  Sperio race back with the ball, launch it back into the area, and Nagasawa controls with one touch and hits the bottom corner with the second, the referee checking his watch with the Zorro Blue are in mid-Theme from the Monkees. 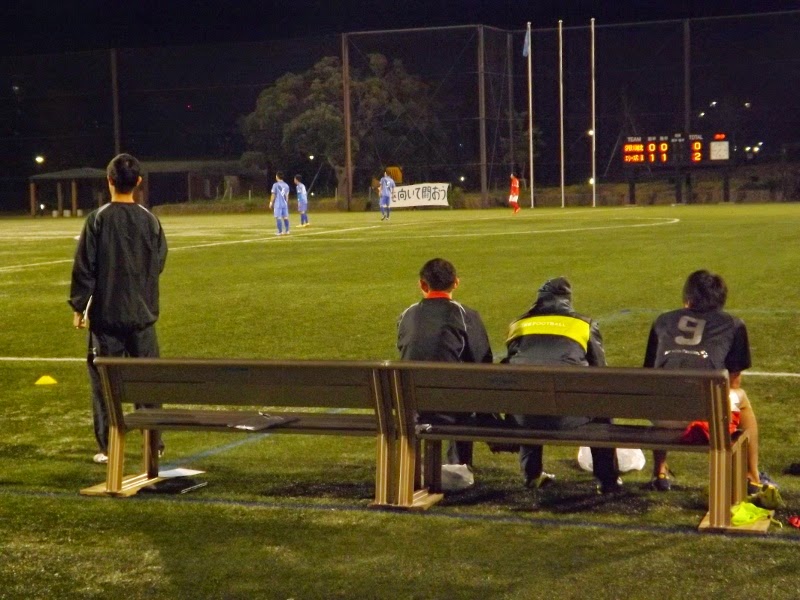 We're straight into penalties, Elyse missing their opening kick while Sperio convert their first two.  But then the third Johoku player chips against the goalkeeper's legs, Elyse keep on scoring, and when Nagasawa clears the bar it's finally all over.  The blue shirts clamber up the stairs, line up in front of the stand, apologise for the loss and bow once again to the fans, who respond with a choral burst of "Sperio Johoku", the team joining in the refrain.  Elyse take the spoils on the pitch but Johoku retain the honours off it.