They won five FA Amateur Cups, two of ten games against Barcelona,  played to crowds of 100,000 at both Calcutta and Wembley, and lent their name to a scandal that almost brought down an entire amateur league,  341 footballers, over 1,000 officials and a county FA banned - many indefinitely - after it was discovered clubs were paying their players more than just travel and tea money.  "Sensation after sensation," the Northern Echo wrote. "The darkest day in the history of Durham football."  Whatever else, life has been anything but dull for Crook Town AFC. 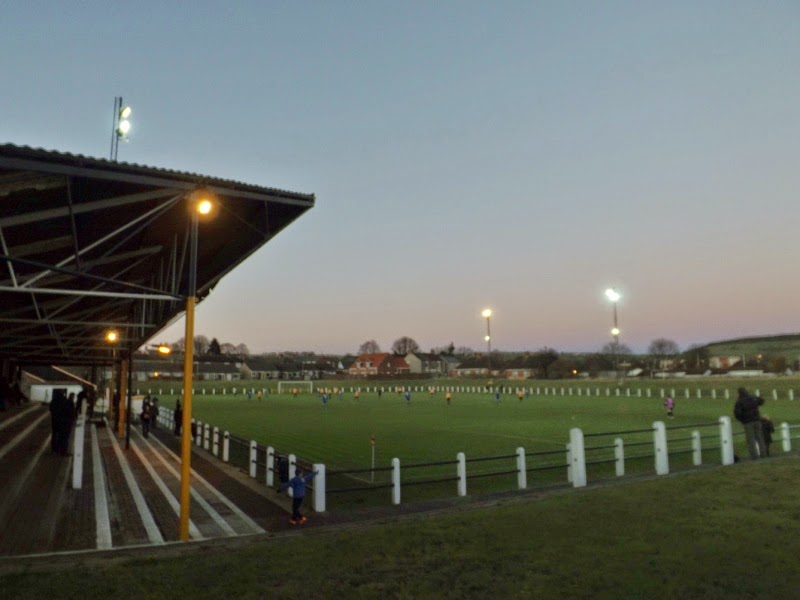 Crook was the first club of Jack Greenwell, who spent 11 seasons with his hometown team in the Crook & District and Northern Leagues.  Borrowed by West Auckland Town for a world championship in Turin,  he made 88 appearances as a player for Barcelona, then coached the Blaugrana, Mallorca, Espanyol, Valencia, Gijon and Peru, guiding the latter to a Copa America championship in 1939.  Greenwell died of a heart attack in Bogota while training Independiente Santa Fe.  "At that time," says his profile on Crook's website, "most people found it an adventure going to Bishop Auckland."  It was with Crook that Frank Clark won his first honours, passing up an England youth cap to play in the 1962 final of the FA Amateur Cup. By the time the left-back retired, he'd added two European trophies, a pair of League Cups and a First Division title, and made more than 500 appearances for Newcastle United and Brian Clough's Nottingham Forest.  "It was the camaraderie in the club that made Crook so special," he recalled over half a century later.  "I have so many happy memories of my time here."  Seamus O'Connell, cattle-dealer and Football League champion with Chelsea, played at Wembley for Crook in 1959. Gary Pratt ran Ricky Ponting out in the 2005 Ashes and spent the following year as a striker in the second division of the Northern League. 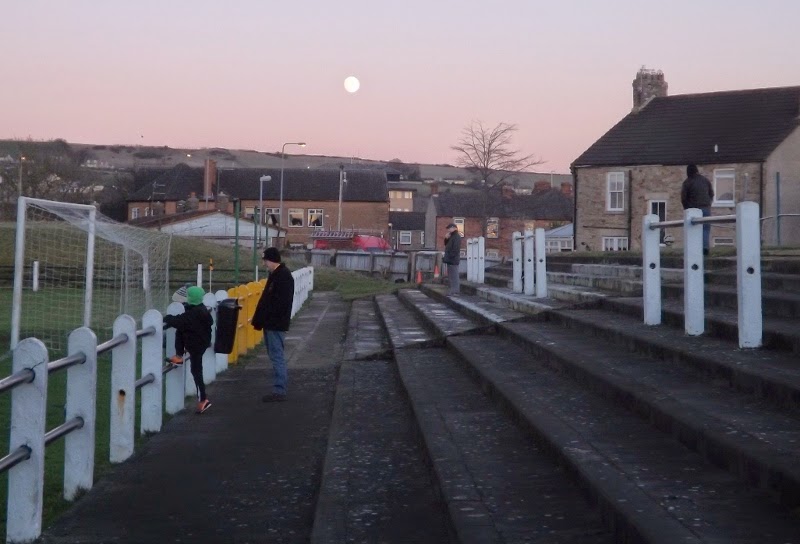 Last season, back in the top-flight for the first time since 2000-01, the black and ambers were comfortably ensconced in midtable, 114 goals shared between 15 players and Kyle Davis top-scoring with 26 in the league.  Not a single one was still at Millfield on September 24th when nine-man West Allotment Celtic were beaten 3-1 in Crook's first and so far only league win of the season. In May, manager Gary Pearson had resigned after three seasons and a second division title. "I feel at the present time the club itself is not in a position to either progress or sustain its current positioning," he explained.  Paul Bennett arrived with 20 new players including Bruno Pilatos, a European Under-17 champion alongside Saido Berahino and Ross Barkley, but quit for "serious personal reasons" in the middle of August. Nick Harrison had come and gone by November, his final game a 4-0 defeat at West Allotment in which Crook fielded an ineligible player and were later docked three points.  Peter Mulcaster, a Northern League manager since 1973, was persuaded out of retirement - "If there's illness and the money runs out, they send for Mulcaster. I never manage teams who have money," he said during a third spell in charge at Northallerton Town - but his young side began 2015 with only three points from 27 games, a 13-point gap to next-from-bottom and a negative goal difference of 90, having leaked 43 in their last six games alone.  "Not the best way to celebrate 125 years of your club," as one Crook fan put it. 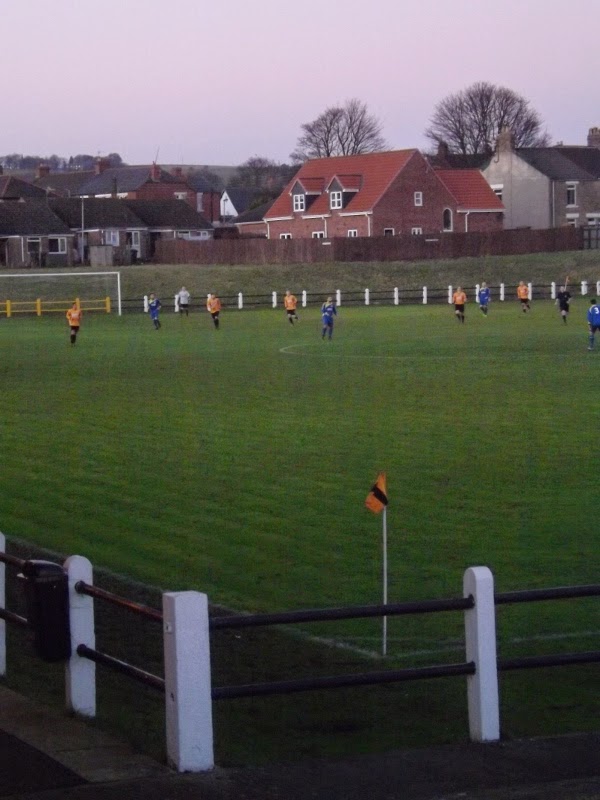 Millfield, bought for £625 from a rugby club in 1898 and built out of colliery waste, is a wonderfully atmospheric setting for football.  Grassed-over on two sides,  it has uncovered terracing at the turnstile block end and a pair of corrugated-roofed stands - "Frank Clark chipped one of those bits at the front fifty years ago" - facing back to the town centre and a lone wind turbine.  The crowd maybe scrapes 100, the merchandise stall is a trestle table and two Makro carrier bags. "Well done, well done, well done," the Crook goalkeeper monotones, in a voice redolent of a handler guiding a sheepdog through a gate. "Well done.  Show for it. Well done, well done." 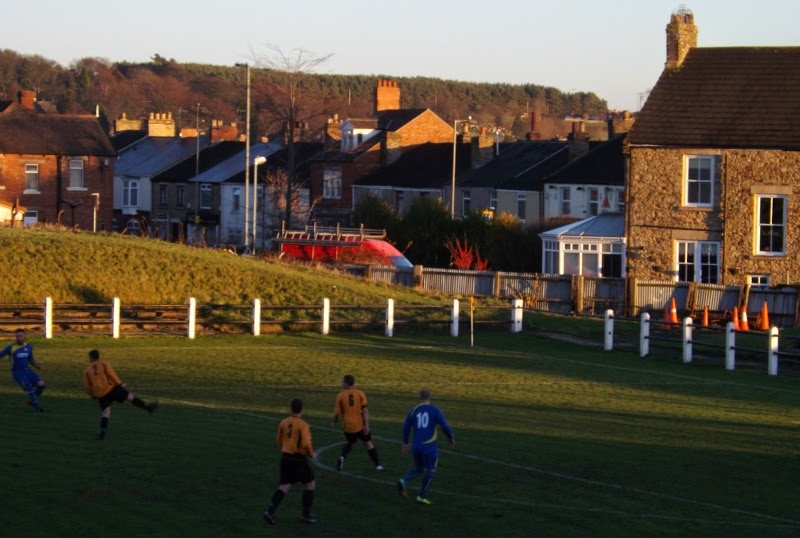 The black and ambers had conceded 11 in their last home game, but Jarrow Roofing are still adjusting to life without John Campbell, picked up by Oxford United after scoring 24 goals in 19 games.  Though Malcolm Morien, a clever forward signed from Blyth Town, ran on to a pass from midfield to put Roofing ahead with just six minutes played,  Crook harrassed and chased down everything, levelling when captain David Webster controlled a defensive clearance and picked out the top corner of the net.  In front of us, a man in polished brogues and a flat cap broke into applause. "Rarity, that bugger," he said to no-one in particular. "Happens once every six months."  Roofing did almost everything but regain the lead, an elderly Crook supporter getting more and more irate every time they attacked.  "Ah man, howay," he raged as Morien slid a Paul Gardiner cross wide.  "He was offside, ye bugger.  BLOODY OFFSIDE. Get a grip, man, yer almost as bad as them in the Premier League.  Get yer finger oot yer arse, son.  If you cannut dee it, you shouldn't come."  "At least it's only 1-1," his mate clapped at half-time. "Newcastle's gerrun beat, Gateshead's gerrun beat, but Blyth's two-up - Keith's got it on the radio." 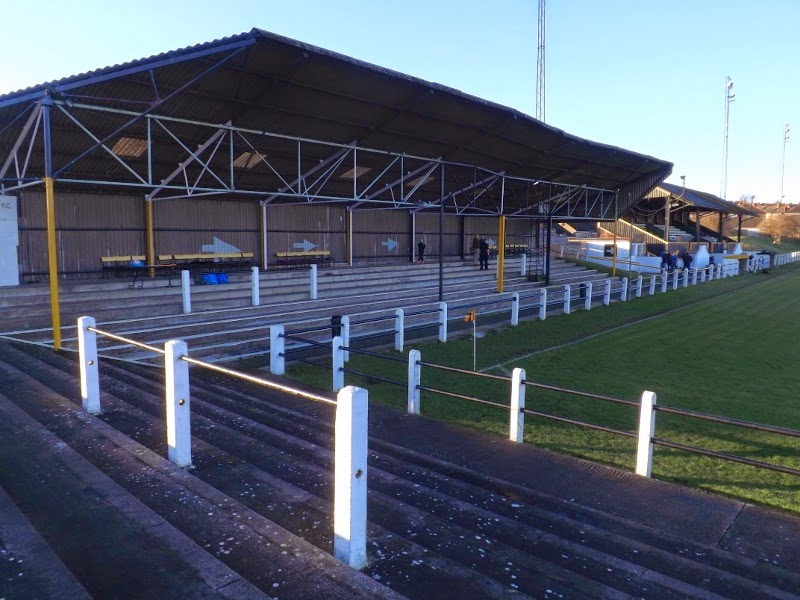 "Blyth's 2-2," someone shouted as Lewis Teasdale nodded the visitors back into the lead against his former club.  "2-2?" Roofing's manager asked, turning to the stand as his team headed back to halfway. "Would that suit them, do you reckon?" pondered a man in a Crook Town knitted cap. "Gan back there for a replay, I mean."  But the Spartans had already fallen behind - "3-2 Birmingham," a voice said forlornly - when Teasdale played in Morien for Roofing's third goal.  Crook, tiring, weren't prepared to give in, Jack Errington, who started last summer on the books of Premier League Burnley, slipped while clearing a cross and Wyn Fremlyn gleefully struck the ball past Roofing's Andy Hunter.  "They could win it here," one visiting fan thought. "Campbell's coming on for Oxford," said another. 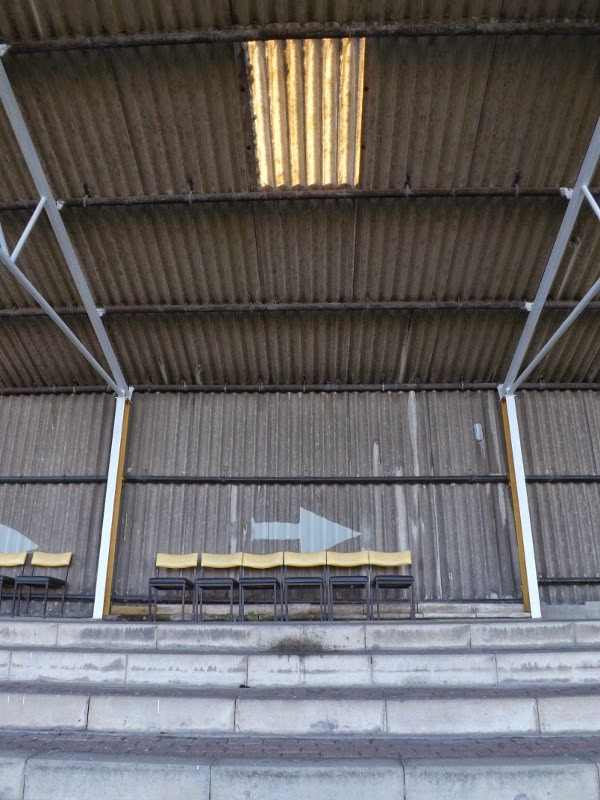 There were five minutes to play when Shaun Vipond scored the away side's fourth goal.  Two minutes later Morien completed his hat-trick, and five minutes after that Teasdale got his second from a cross by Corey Barnes, once a 16-year-old Football League debutant with Darlington and far and away the afternoon's outstanding player. "Well played, lads," yelled a Crook fan as the teams departed the pitch.  "Best enjoy what we can from the rest of this season."