Seaton Burn was a pit village six miles north of Newcastle-upon-Tyne and the birthplace and first club of John 'Jack' Carr.  Newcastle United's third England international, the left-back was in the squads that lifted three Football League championships and reached five FA Cup finals, winning only one.  "If United can't win the cup they ought to be given it for good attendance," joked a supporter before the Magpies finally broke their hoodoo in a replay held at Goodison Park - 70,000 inside, 15,000 more locked-out - in 1910.  Seven years earlier, Carr had been one of three players approached by chairman James Telford in the aftermath of a seven-goal defeat to Aston Villa. "We seem to be making a mess of things. Will you go into the boardroom, lock yourselves in, and choose what you consider to be our best team?" 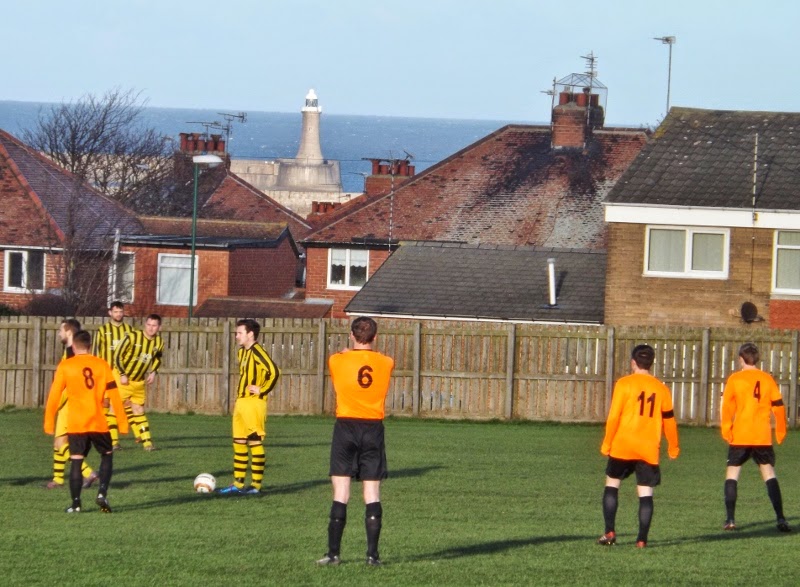 It was, reflected journalist Ivan Sharpe, "the birth pains of one of the most brilliant teams in the history of the game". "Each man was an artist," wrote another correspondent. "They had a rhythmic beauty," Sharpe recalled.  "(That team) would give any modern side a two goal start and beat them," thought Scottish left-half Peter McWilliam, Spurs boss when they won the 1921 FA Cup.  Herbert Chapman, speaking before his move to Arsenal, told the press his ambition was "to build a Newcastle United there."  Carr - "A gentlemanly defender," the club's centenary history describes him, "the ball always being his objective rather than the man" - played 279 times with his only professional club then joined the St James' Park coaching staff when he retired in 1912. A year later the Magpies went on one of their regular playing tours of Denmark and returned with two Olympic finalists, defender Nils Middelboe and Anthon Olsen, a forward who'd scored seven times at the Stockholm Games.  Neither trialist made the grade, though Middelboe - an accomplished tennis player and Danish record holder in the triple jump and 800 metres - moved on to London, captaining Chelsea as an amateur while working in a bank.

When war broke out in 1914, the Royal Field Artillery was billeted at St James' and training sessions ended with rifle practice at the Gallowgate goal.  Carr served in the Motor Transport Army Service Corps, then made use of his Copenhagen connection to bring about a temporary appointment as Denmark coach at the 1920 Antwerp Olympics, Middelboe among the side defeated 1-0 in Spain's first ever international fixture.  The Seaton Burn miner's son left Newcastle's staff in February 1922, managing Blackburn Rovers until December 1926 and later working as a Tyneside publican before his death in 1948. In 2012, his two full England caps and a third won at a trial game were sold at auction. "One of the most celebrated locals to play for United," the club's Who's Who recalls. 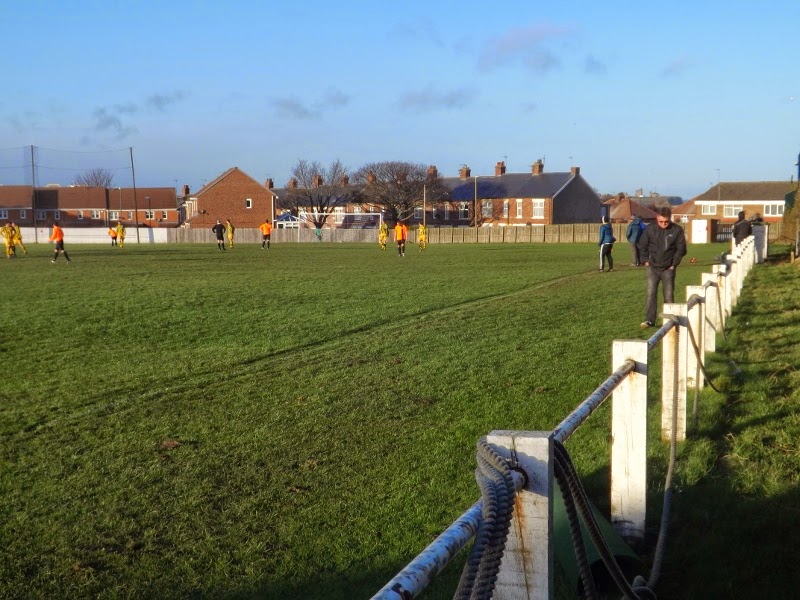 That's a long-winded way of describing why Whitburn Athletic versus Seaton Burn, a midtable battle which wasn't even the stand out fixture in the basement division of the Northern Alliance, first caught my eye.  I'd already seen Whitburn in their home village before their move up the North Sea coast to Jack Clark Park, a council pitch where South Shields played for 17 years after the club sold its Simonside Hall ground for housing, was beaten to a new site by developers and then upped sticks to Gateshead for a second time in 1974.  There are bowls centre signs and recycling bins at the entrance, the sea a choppy blue strip above the felt and glass roofs of allotment greenhouses.  Used by Marsden CC, the changing rooms for the main ground are in the cricket pavilion and the football pitch is marked out on the boundary, a tape barrier keeping the touchline clear of the wicket. 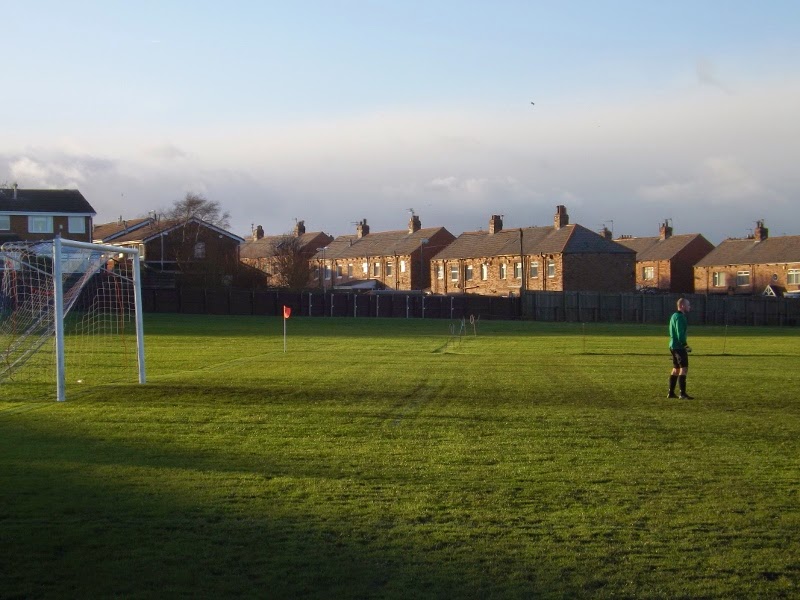 Whitburn were formed in 2010, which was also when Seaton Burn were relegated back to the second division with only eight points and "a very poor season as far as results go".  Last year the clubs finished 8th and 11th, which is exactly where they remain when the game kicks off in a shower and 30mph gusts of wind.  Four spectators huddle miserably by a pile of picnic benches under the clubhouse roof. "Mind," says one, "it was worse last week.  Freezing, it was.  Absolutely Baltic."  "I was at an under 8s game once," says his mate.  "The subs were crying when they kicked the ball and we had to take the goalkeeper to hospital with suspected hypothermia."

The home side are decked out in easyJet orange, Seaton in yellow and black stripes. Both linesmen keep their coats on and their heads covered.  "I'll gan oot when I have to gan oot," the referee says, appearing in a doorway.  I stand in the minimal shelter provided by a hedge and a waist-high metal fence, which the players have to vault over whenever the ball goes out of play.  "You're mad watching this," a Whitburn substitue says.  "Can you get me jumper out of the changing rooms?" the goalkeeper shouts across. 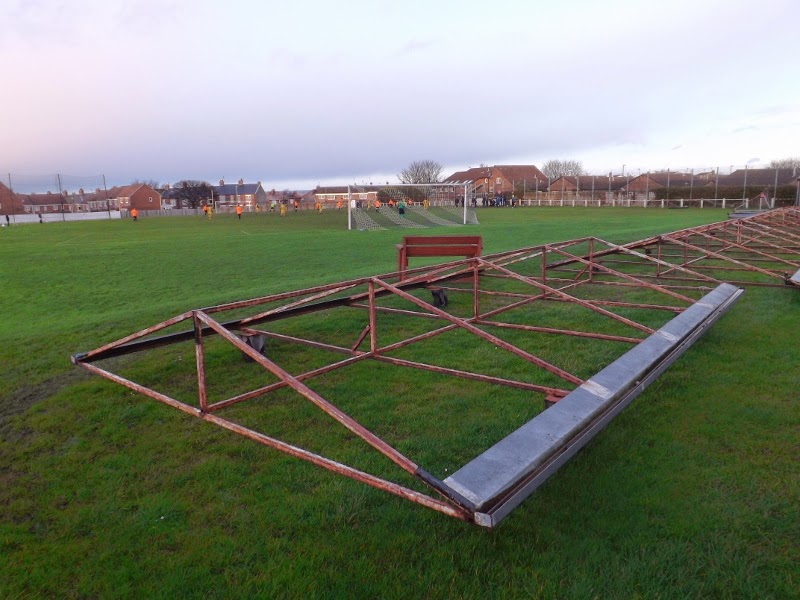 The game, unsurprisingly, isn't much of a spectacle, most attempts to play football losing out to the wind.  Whitburn have a goal chalked off when a Seaton Burn official flags for a foul throw, their players muttering unhappily as they return from halfway, while the visitors very briefly think they've scored when the ball squirms clear of the goalkeeper but is gathered before it crosses the line.  The break's kept to five minutes, the second half getting increasingly tetchy as the home side venture repeatedly into the opposition's penalty area but can't put the ball in the net.  "Just wait until summer," a spectator says, stamping his feet on the grass. "At least the rain will be warmer."