Even on a frosty afternoon in the middle of January there's something special about a Northern League trip to Shildon.  "Durham's Wild West," penned a recent repeat visitor in When Saturday Comes. Pinned in by red brick-and-pebblesdash terraced houses, Dean Street's covered grandstand and spindly floodlight pylons are right up among the quintessential tableaux of the world's second oldest football league. 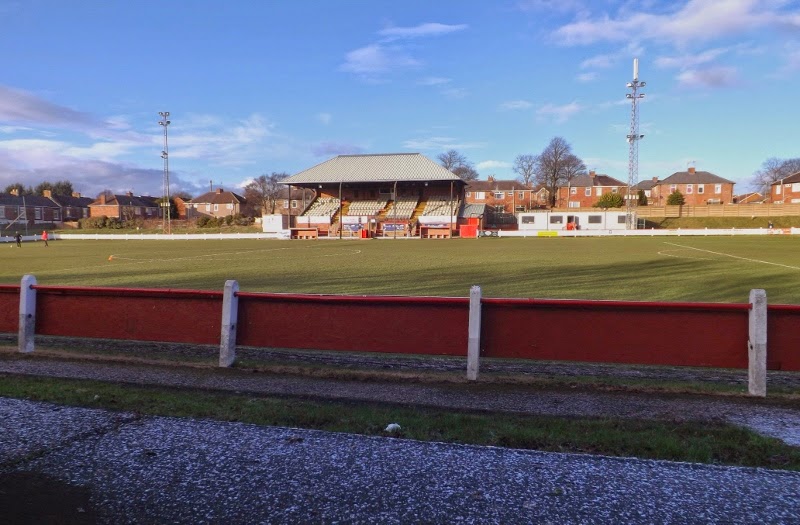 The stand went up in 1923, the team's fortunes rising just as dramatically in the eight and a bit years which separated  the club rejoining the Northern League in 1932 and half the championship resigning "on account of the difficulties of playing war-time football" in December 1939.  Dean Street's golden generation - Harry Nicholson, Bill Bushby, George Hope, Jack Downing and Alf 'Wacker' Wild, "a defender of such belligerence that to this day those who saw him play wince and clutch their shins at the very mention of his name," wrote The Guardian's Harry Pearson in 2008 - cantered to five titles, finished second three times and third once, lifted five League Cups, reached an Amateur Cup quarter-final and made the second round proper of the FA Cup. "The Railwaymen," one historian reflected, "really were on the right track". 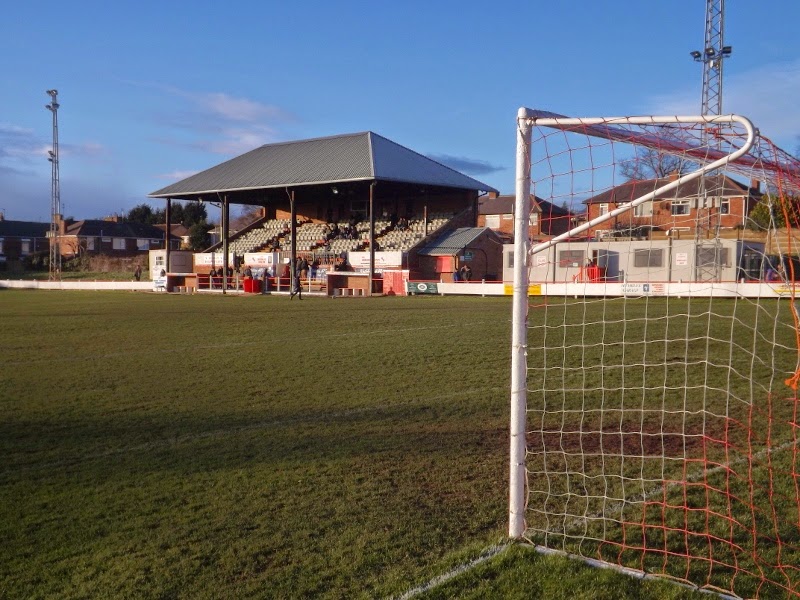 Derailed all too often afterwards (the first club to be relegated from the Northern League's top-flight three times and just weeks from folding in 2004), the last half-decade has brought a first Durham Challenge Cup since 1972, a Northern League runners-up spot and a semi-final in the FA Vase, the Railwaymen halted six minutes short of a stop at Wembley to take on neighbours Spennymoor Town. "The greatest disappointment of my life," thought Northern League chairman Mike Amos, a Shildon supporter of six decades' standing.   With Spennymoor taking promotion in the summer, many viewed this as Dean Street's season, but after playing nine ties in five rounds of the FA Cup, exiting the Vase in a third round replay and enduring a middling run of pre-Christmas form, the title favourites were 13 points behind leaders North Shields with five games in hand and six teams - including Jarrow Roofing Boldon Community Association - wedged between them. 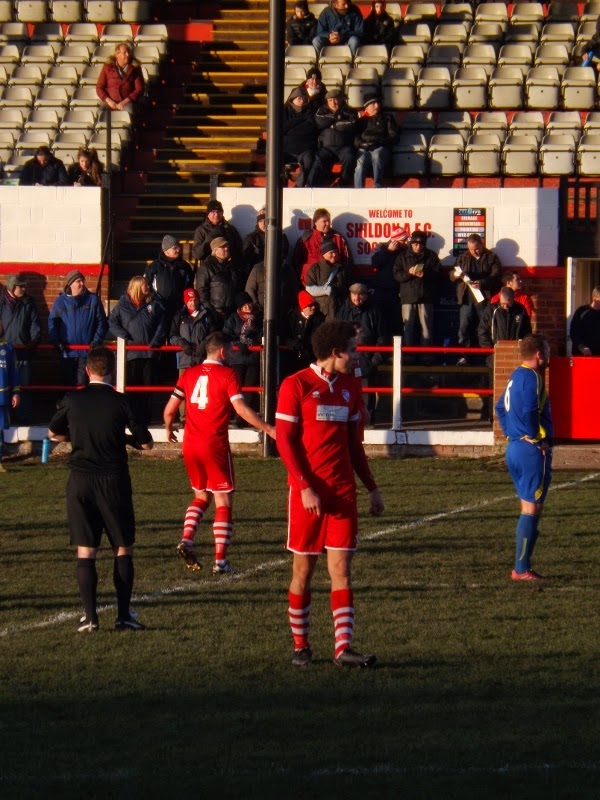 Roofing's chairman, owner, manager, groundsman and chief sponsor Richie McLoughlin was the driver for the day, the motorway talk of transfer targets, sponsorship deals and midfielder Shaun Vipond, last week's matchwinner ruled out with a broken wrist diagnosed on a Friday night visit to his local A&E.  The visitors' cars pulled in at Primitive Street,  the manager carting the team's water bottles out of his car boot while player-coach Peter Leven - formerly of Rangers, Kilmarnock, Chesterfield, MK Dons, Oxford United and Scotland U21s - carried a holdall past a fish bar, a handwritten sign in its window advertising Shildon footballers' curry sauce and chips.  The home team had already arrived, the spectators entering gradually through the turnstile block in groups of two and three, heads covered and buttoned up against the chill.   An ice cream van circled the surrounding estate.  "Five degrees," a Roofing player reckoned. "Lukewarm, not even cold." 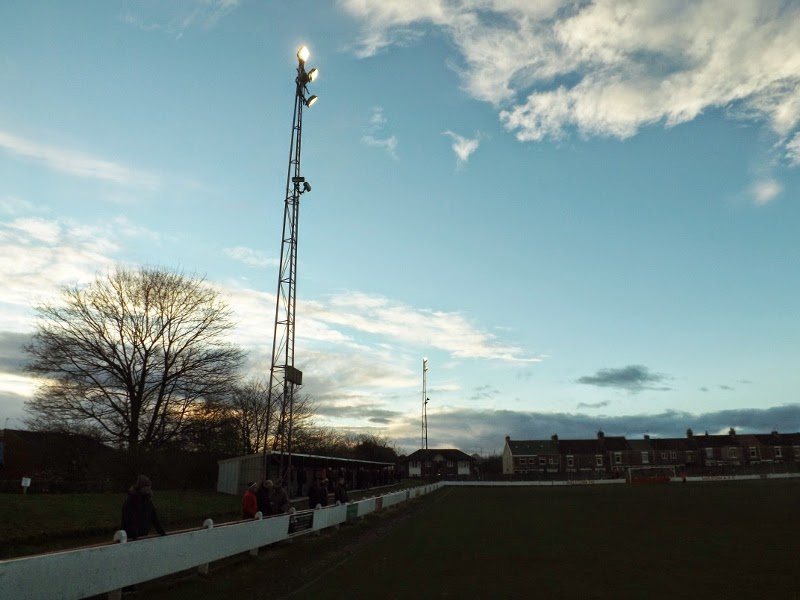 The ground's open behind both goals, a burger van parked up by a corner flag, the hospitality suite and club shop in adjoining portakabins, and the teams emerging from the main stand tunnel to the theme from Match of the Day.  The spectators were middle aged going on elderly; once the music had finished the atmosphere was more akin to a country auctioneers than a football stadium.  In a thunderous, evenly matched opening half, Shildon had plenty of shots but not enough invention, the away side first to score when a Wayne Phillips cross was nudged down by Malky Morien and Paul Gardiner prodded past the flailing Kyle Hayes.  "Come on Shildon," a lone voice shouted plaintively across the ground, a rumble of discontent rolling out from the main stand paddock when Billy Gruelich-Smith raced across a defender and went sprawling in the box.  "Howay man, referee.  Do your job.  Gerrum off!  Bloodly useless.  He's allergic to his cards, man."  Perceived injustice managed what forty minutes of play couldn't, only three saves from a previously unworried Andy Hunter preserving the lead either side of half time.  "A terrific game," thought The Roofing's Twitter feed. 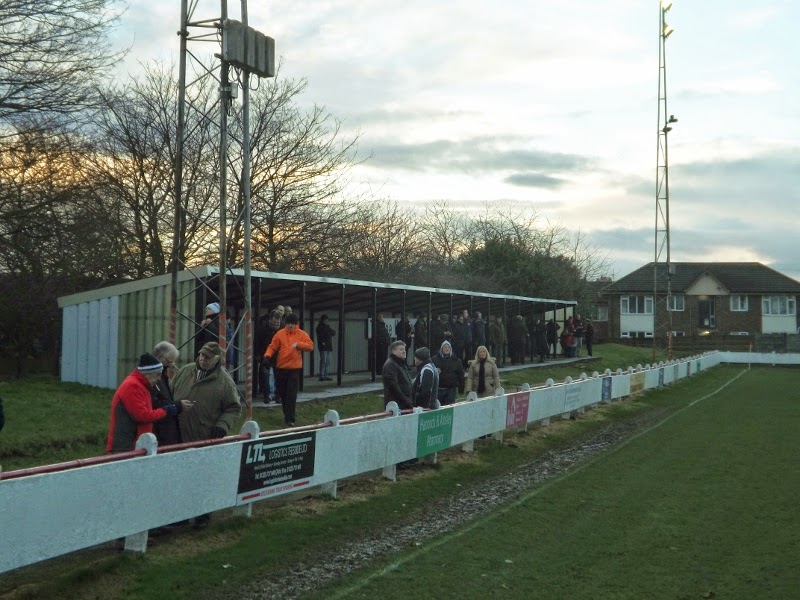 At the break I'd skipped the burger van queue and moved in alongside the paddock partisans.  "The referee would've gone to that Specsavers place," mused an old bloke in a hunting cap and knee-length coat, "but he walked right past it." "A pound's a bit expensive for a Bovril," thought his mate, "but the Boro's one up and Durham's beating West."   A Shildon official came round with the leftovers of the halftime spread from the boardroom portakabin.  "Pork pie, Alan?  Help yourself to a sandwich if you want."  The home side were simultaneously helping themselves in midfield.  "You're backing off," McLoughlin rallied.  "Get up and in their faces."   A dog made a sudden dart across the Shildon backline.  "Will the owner of the Jack Russell," the tannoy asked, "please report to the supporters' club shop?" 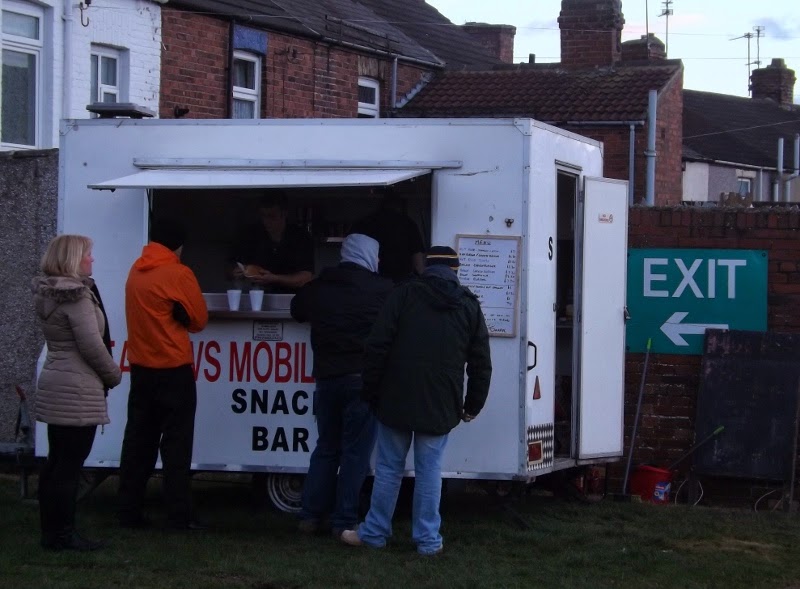 Roofing's lead disappeared shortly after the last of the food, Corey Barns miskicking and Mark Donninger, once of Sligo Rovers, Perth Glory and the Icelandic top-flight, eventually levelling the scores.  "I thought we'd buggered it up there," said the bloke in the hunting cap between satisfied drags on his cigarette.  In the 70th minute, with the visitors still ruing a Morien miss at the other end of the pitch, Lee Chapman's cross deceived the otherwise faultless Hunter and Shildon, despite a late Roofing rally, had their three points.  "I bent down expecting it to bounce," Hunter lamented in the social club as his teammates tucked into a post-match meal of sausage, beans and chips. "And it didn't.  Went in off my knee."  "North Shields next Saturday," said a fan, his back to a signed Premier League shirt and the Durham Challenge Cup.  "That'll be some game." 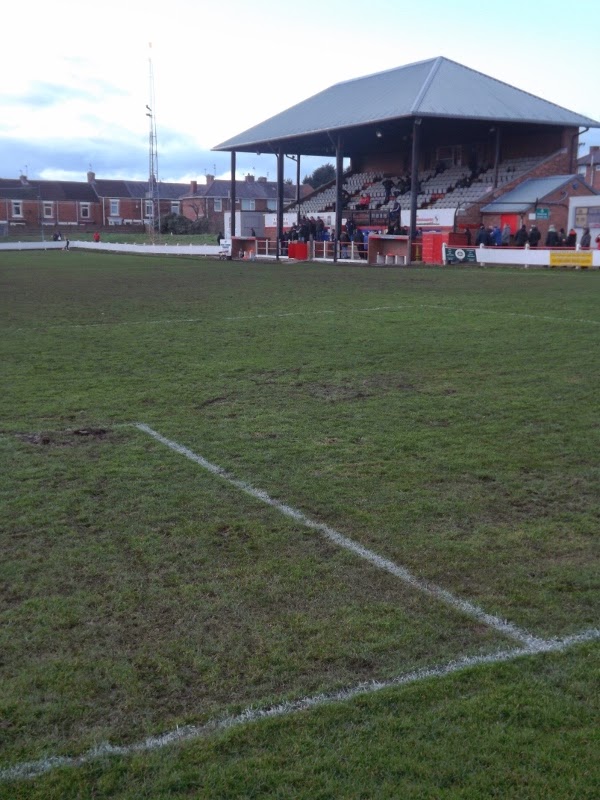