There are a lot of things I like about non-league football in Japan: it's almost always free to watch, the universally relaxed approach to alcohol means you can turn up with your own bag of booze, kick-off times are staggered from Saturday morning to Sunday night, the season continues all the way through the summer, and the venues themselves, while rarely little more than artificial pitches with permanent seating for a few dozen people, are often on the doorsteps of much more interesting places. If monorails built for World Expos don't do it for you, there are  bayside parks and former J.League grounds,  1964 Olympic hockey fields or a stadium complex built to host the final of the 2002 World Cup. 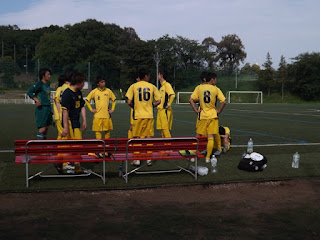 Today's double header promises to be equally memorable, beginning on the fringes of the grandiloquently titled Yokohama Country Club, a 20-minute walk from the nearest railway station via the side of a toll road, a concrete underpass and a long row of Sunday golfers driving balls against a 50-metre-high net. The Higashi-Totsuka pitches were used by J1's Yokohama F. Marinos until the mid-2000s when they relocated to purpose-built facilities in the city centre and left their old training ground to Yokohama FC.  Still operated by the city's second-tier team,  the football park is nowadays used by junior players, women's sides and the local Prefectural Leagues, with back-to-back games in the third-flight of the Tokyo Soccer League - six divisions below the professionals but clearly just about high enough for players to feel unembarrassed about turning out in pink, turquoise and day-glo orange boots - scheduled for the hottest part of the day.  I catch the last 20 minutes and no fewer than four of Hachioji's eight goals against the toiling mobile phone workers from au.EAST.  The next two teams, Griffin Tokyo and Onze FC, are sensibly limbering up behind the net that doesn't have the ball smacked repeatedly into the back of it, and the only other spectators are au's defence.  Hachioji's grateful substitutes loll about in the heat on folding benches, which appear to be the only facilities besides three vending machines, a dozen extra goalposts and an abandoned terrace with grass steps, half its roof left and a bicycle lock on the gate. 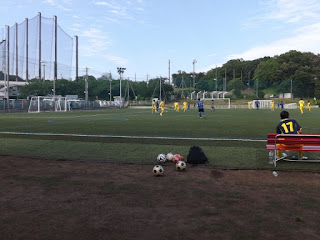 Eight-goal tonkings are nothing out of the ordinary among the 72 teams that make up Tokyo's third flight.  In another of the division's six groups, Tokyo23 were running 14 past Corazon Matador (Ole!) while Griffin - "Talent wins games but teamwork and intelligence wins championships" their website promises - had smashed the soporific Panda FC 9-0 just a fortnight previously.  Today is a much cagier affair, with the temperature nudging 31 degrees and the pace unsurprisingly lagging somewhere between languid and Moussa Sissoko once the transfer window closes.  The best chance of the first half drops at the feet of Onze's number 10, who misses a one-on-one, the frame of the goal and the practice wall behind it, slicing instead straight into a clump of trees.  Misfires aside, the whole thing is a fairly surreal experience for someone more accustomed to amateur football in the north-east of England: burly defenders say "Please excuse me" after committing minor fouls, the linesmen spend the break pretending their flags are baseball bats, and a player subbed at half-time strolls back to the touchline twenty minutes later with a plastic straw and a latte in a can.  Nothing much happens until the final minute, when Griffin find their range with two goals in two attacks.  When it's all over the teams walk to the opposing benches, form a line and respectfully dip their heads. 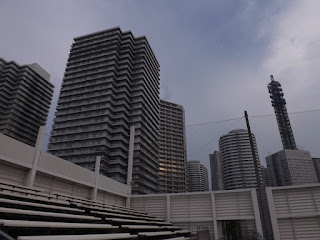 The first game done, I leave the tinny thwack of golf balls behind and hurriely retrace my steps to central Yokohama, where FC Ashai and Minato Mirai are contesting a Kanagawa Prefectural League Division Two game at Marinos Town, an expensively-assembled five-pitch facility complete with 2,000-seater stand, Italian restaurant, club shop and 24-hour convenience store.  The Marinos announced their departure from Higashi-Totsuka in the year they completed their second successive J.League title and third championship win in just nine years. One decade and a single runners-up place later, the club - now 20% owned by the Manchester City Group, who promise "a collaborative and integrated approach to the football, marketing, media and commercial development of all the clubs in the City family" - are upping sticks again, this time to a cheaper training ground next to the Nissan International Stadium.  The sky-high lease got the underperforming Marinos one of the world's most visually impressive training facilities, overlooked by the 60 billion yen Fuji Xerox building and the futuristic high-rises of Minato Mirai.  A skywalk whisks me out of an underground shopping centre, across upscale department stores and through the display of 'Zero Emission Autonomous Vehicles' at Nissan's global headquarters, before I'm deposited in a car park where the adult players are milling around with canned coffee, Milky Ways and the closing minutes of a Marinos youth game. 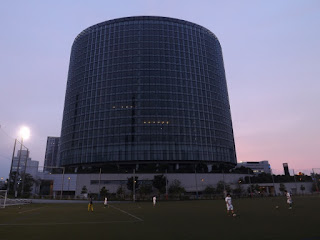 The sky's turning pink by the time the evening fixture begins, the crowd - or, more accurately, me, the substitutes and  a teenage couple who have turned up because they know one of the Asahi players - gathered on a twin-tiered metal bench along the convenience store touchline.  Both teams clank the crossbar, but there's more industry than guile and little to threaten either goal.  Instead, the biggest source of entertainment is a winger with the workrate and volubility of a young Craig Bellamy, whose high-pitched shrieks of frustration peak just seconds before Minato Mirai fluke the first of a what turns into a highly improbable three goals in the final 10 minutes.  The teenagers take off shortly after the second, leaving just me and a man returning from a supermarket who's found a vantage point by the fence. Another hugely entertaining Sunday evening; Greater Tokyo's other 35,682,458 inhabitants don't know what they're missing. 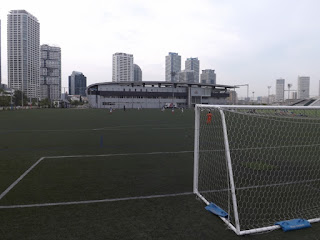