I'd woken up late and groggy, with the temperature already in the high-20s and a head that felt like Jon Snow's stomach after the closing scenes of Game of Thrones.  The online news was all about Barcelona, who'd eased to another Champions League while I was otherwise engaged sleeping off my Saturday night.  "Exhilarating" the Guardian's man in Berlin gushed.  "This is the team that takes football to its highest levels." 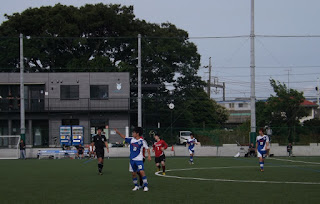 As a long-time connoisseur of mediocrity in the world's favourite game, my choice of Sunday afternoon entertainment was always likely to be several notches lower on the quality scale.  Still, it's not everyday you get the chance to see the second round of games in the prefectural qualifying tournament for the 22nd All-Japan Club Football Championships, which is a bit like the FA Vase could be if it was crammed into eight weekends, enjoyed virtually zero coverage and had its semi final played in front of a handful of people on an Olympic hockey field.

The Kanagawa competition gathers together heavyweights like Enoshima Flipper, FC Socios and ninth-tier Azul Yuri, a team with no online presence besides the listings of their fixtures of the site of the Kanagawa Prefectural League.  Their opponents were FC Atsugi, one division higher and hailing from a town whose decidedly minor claim to fame is as the birthplace of Teruyuki Moniwa, a second-half substitute in a 2006 World Cup game when the first choice defender got cramp in both thighs.  The two sides met on a pitch that had been funded as a legacy project of the 2002 tournament and is now between a petrol station and an overhead railway line, limbering up to sweeping views of electricity pylons and the ripe smell of manure from a vegetable plot that backed on to a graveyard. 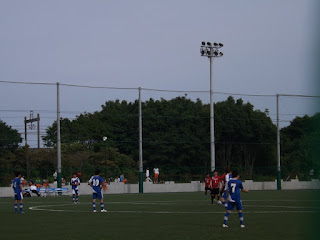 There were already a few dozen spectators perched uncomfortably on concrete blocks, facing a line of diggers and a convenience store stripped of almost all its edible goods.  A couple pushed a dog around the perimeter in a custom-built pram and three women sheltered under parasols despite the absence of either direct sunlight or rain.  Some felled tree trunks and the clubhouse fire escape completed the seating, making the end effect something like Thornaby without the charm or rustic appeal.  Azul's coach was dressed for success in a salaryman's suit, his tactics scrawled on a notebook and a dozen Pocari Sweat bottles dotted around his feet.  His opposite number prowled the touchline in a tank top, growling instructions at his team.  Shortly after kick-off half the crowd departed with transparent bags and surgical masks to clear away leaves behind the goal, where the next two teams to use the pitch were attempting their passing drills beside a cabbage patch and an extra set of posts.  It took another ten minutes before Azul were able to field an entire team of their own, their eleventh man bowing apologetically while hurriedly swapping a pair of white Crocs for bright yellow boots. 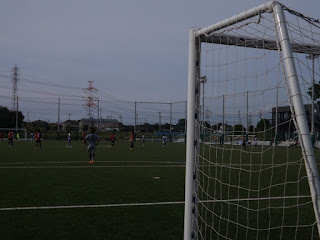 Even without their tardy midfielder, Azul had started the better of the two teams.  Then, under less pressure than a FIFA Exco member in the mid-1990s, their goalkeeper flung the ball ten metres wide of its intended recipient and straight at the feet of a lurking Atsugi forward.  The striker dallied, but was then helpfully tripped while attempting to go sideways across goal.  Less than a minute after the penalty was lashed past him, the keeper unwisely attempted to make amends by hurtling off his line, watching as the ball was lobbed over his head and straight down the middle of the unguarded net. The remainder of the half was played out in an atmosphere of polite embarrassment, the Azul manager crossing out several lines of his notebook before dropping it on the floor. 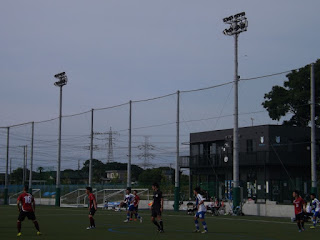 Azul surprised even themselves when they scored early in the second half,  then staggeringly levelled with a minute left to play and Atsugi lingering on the ball perilously close to their own goal.  There was no messing about with extra time while the next teams waited and it cost £2 an hour to park your car, so it was straight into a penalty shoot-out at the vending machine end.  The first four were placed into corners, the fifth and sixth straight into the goalkeepers' hands.  Atsugi scored their next two, Azul could only clank the post.  When the winning penalty hit the net, there were a few seconds of awkward silence before everyone lined up, bowed towards the clubhouse and then walked off the pitch.