The full account of how I ended up adopting Omiya Ardija as my Japanese team is a long and complicated story involving a serious miscalculation of Greater Tokyo's demographics, David Mitchell's number9dream and an Arsenal-supporting English teacher from Limerick. Essentially, it all boils down to this: as a Newcastle United fan for as long as I can remember – thanks a bunch, Dad – I'm duty-bound to root for underachieving, wildly unsuccessful sides whenever I come across them.  In other words, I really didn't have a choice. 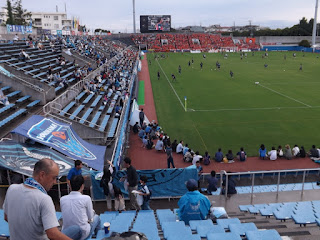 When I first came to Japan in September 2004, the closest alternatives to Ardija were the country's most successful and best supported club sides; my arrival, miraculously, coincided with tiny Omiya winning each of their last eleven league games.  On the final afternoon of the season,  the club's star Brazilian striker danced a samba with a corner flag while a raucous, orange-clad crowd acclaimed their team's first ever promotion to J1. Later that night, I drunkenly shimmied up a lamppost opposite Omiya Station and liberated a flag, a cluster of fans and a shopkeeper cheering me on from the pavement below.  It's the closest I'm ever likely to come to feeling like a gloryhunter. 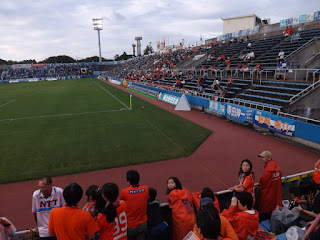 It didn't last, of course. The Brazilian departed for Kofu, Gamba Osaka and Dubai, while the Squirrels morphed into a kind of Japanese Sunderland: hopelessly inept for nine-tenths of the season before somehow acquiring just enough points to do the same again next year.  When they did briefly threaten the top of the table in 2013, the club responded by dispensing with their Slovenian trainer, losing 17 times in 22 matches and getting relegated the following year. 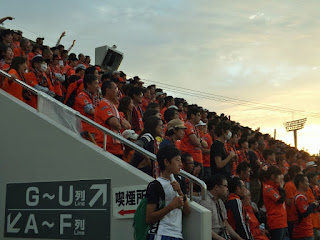 "Before the season started I thought we'd go straight back up as champions, but after the first few weeks it was beginning to look like a disaster," Omiya season ticket holder Steve Barme says.   Beaten away at Cerezo Osaka and JEF United before the new campaign was a month old, the Squirrels haven't lost in eleven games since, are four points ahead of Jay Bothroyd's Jubilo Iwata at the top of J2 and are up against a midtable outfit who've given seven games to a forward born the year after England won the World Cup.  "1-0 Ardija," Steve thinks, "but ask me again right before the end." 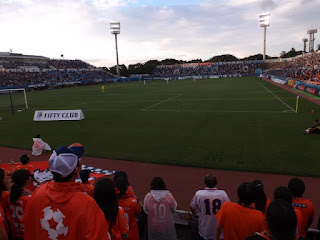 With the ground completely uncovered,  I'm relieved when the rain stops just as I arrive.  Unfortunately, ticket sales for away fans come to a halt at exactly the same time.  "Sold out," the woman in the ticket hut apologises in halting English.  Instead, I get a seat at the opposite side of the ground, a paper fan, two flyers, a leaflet for a performance idol contest and four glossy pages of adverts with matchday programme printed on the front.  Across the pitch, the 2,000 or so Omiya fans twirl towel scarves and rattle off the refrain to Boney M's Rasputin and "We Are Orange! We Are Ardija!"  After five minutes of muttering and an unsuccessful attempt to dodge through a rope barrier, I finally realise that there's nothing to stop me walking around the outside of the stand and straight into the away end, where Steve's reserved two seats with the aid of a backpack and umbrella. 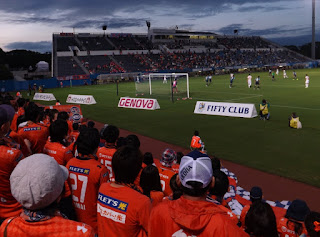 Events are more straightforward on the other side of the hoardings, Ardija taking the lead midway through the half when Shigeru Yokotani strolls forward and plants a rising, right-footed shot into the uppermost corner of Yuta Minami's net.  Ten minutes into the second period, Dragan Mrda, capped 14 times by Serbia and formerly of Red Star Belgrade, Sion and Lierse, passes a second past Minami's dive, and three minutes after that Akihiro Ienaga takes one touch to move the ball onto his left foot and another to piledriver it into the net.  The away end bounces in perfect synchronisation, the singing led by a fan in matching orange flip flops and yoga pants; blue and white flags wave limply behind the opposing goal. 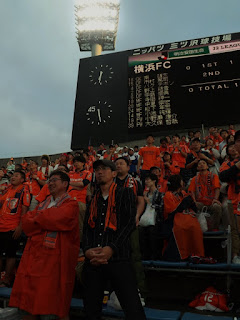 Omiya coast through the remainder of the game against tiring and disheartened opponents, Ienaga - talented enough to play 25 times for Mallorca yet lacking the mobility to make it at Plymouth Argyle - flicking and spraying the ball about with the languid air and thinly-disguised disdain of a movie mogul casting a roomful of blondes. "Like a cup tie," thinks Jon Steele afterwards. "Yokohama looked good until the second goal but after that they had nothing left to give." We leave the ground to news that Jubilo - two up in the first half - have gone down by a single goal at home to Gifu.  With almost half the season gone, Ardija are now seven points clear at the top.